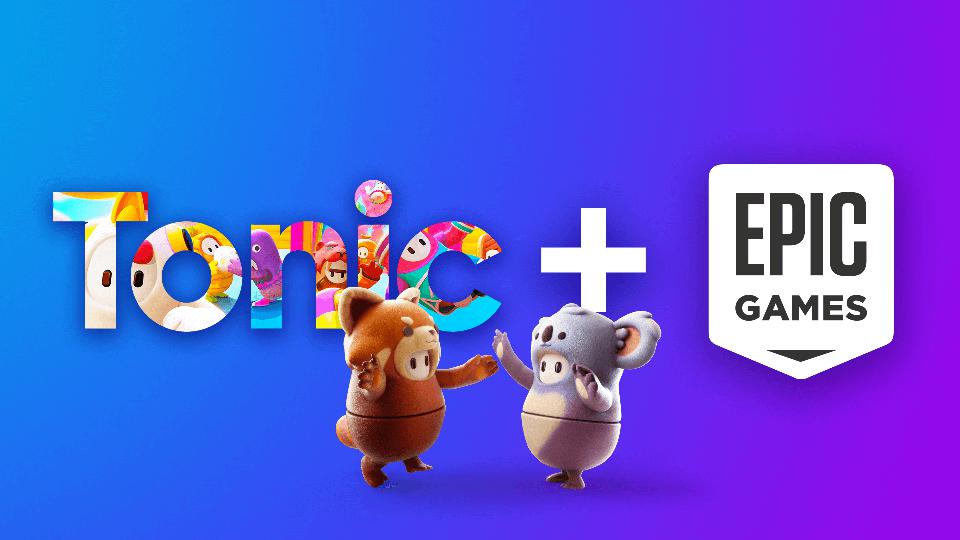 ZNGA
bought a company known for its cross-platform and cross-console acumen.

In either case, executives outlined the deals as bigger than just talent acquisition and a game franchise or two. In either case, the deal suggests where the acquirer is going and where the industry and entertainment overall is going.

For Epic, buying London-based Tonic Games Group was a chance to acquire Fall Guys: Ultimate Knockout, a cute, vicious battle royale game where lumpy avatars waddle over obstacles and get other competitors out of the way.

Fall Guys kicked off in the middle of the pandemic with an audience not typically found in traditional battle royale titles. It’s a smart and generally accessible iteration of the Battle Royales game mechanics that Fortnite has so successfully developed over the past three years.

And like Fortnite, Fall Guys is a free title that lets you make money selling branded character skins from other popular franchises like Cuphead and Sonic the Hedgehog. More importantly, Tonic executives share Epic’s vision of a virtual future where entertainment, gaming, commerce and more will merge into a unified, universally accessible digital space.

“It’s no secret that Epic is invested in building the Metaverse and Tonic Games shares that goal,” said Tim Sweeney, Founder and CEO of Epic said in a press release. “As Epic works to build this virtual future, we need great creative talent who know how to create high-performing games, content and experiences.”

Sweeney was a major proponent of building the Metaverse, a concept borrowed from science fiction classics by Neal Stephenson, William Gibson, and Ernest Cline. Now he’s added a few more arrows to his metaquiver as Epic shoots to create a great digital future.

The sensitivity behind Zynga’s deal for Echtra Games is considerably less, although this can be seen as an intermediate step towards this metaverse vision.

Regardless, it is no less telling for the future direction of the mobile giant. Zynga was one of the first major mobile publishers to benefit from Facebook as a publicly traded company in the early days with addicting titles like Farmville and more recently with titles like Words with Friends, Game of Thrones Casino Slots, and Harry Potter Puzzles & Spells.

Echtra has developed crossover games based on high-performing franchises like The Sims, Diablo and Torchlight, on platforms like Nintendo’s Switch and next-generation consoles from Sony and Microsoft.

Zynga had already announced its first non-mobile title, a Switch version of Star Wars: Hunters, an action title set to be released this year. But with Reala’s talent in hand, the mobile giant can be more safely immersed in games that go beyond thriving mobile space.

In that regard, Zynga’s cross-platform push is reminiscent of Epics, particularly Fortnite, which is available on virtually every gaming platform except iOS and is exposed in an ongoing legal battle with Apple

Matt Bromberg, COO of Zynga, told Barron that at some point players will expect to be able to play a game on any platform they want. Subscription game services are an expression of this trend, but individual titles also need to be played as much as possible.

“In a few years, it will seem out of date that we’ve thought about platform-based gaming experiences,” said Bromberg.

Zynga’s move to cross-platform activities can pay off investments in increasingly sophisticated mobile titles that can be used anywhere. Adding a cross-platform game is both fan-friendly and brand-expanding, which is important in a world of choice.

Epic will also add Fall Guys to the Epic Game Store and expand to other gaming platforms, greatly expanding the game’s reach beyond its PlayStaton roots.

And cross-platform mobile games are now more possible than ever, especially as devices add 5G networks and powerful graphics chips so that players there can credibly compete with users on game-first devices like consoles.

Sony is still playing the platform exclusive card profitably, but that’s much less the case with Microsoft’s latest consoles and the subscription game service available on both the consoles and PC offerings. Even Nintendo, long a bastion of exclusive products, has loosened up a bit in recent years and allowed its franchise characters on mobile devices.

Apple, owner of the lucrative iOS mobile game platform, is using multiplatform in its own way, as it migrates its laptops and desktops to the same homemade processors that run the iPhone and iPad.

Running games that are optimized for mobile devices on Apple computers should become increasingly easier for developers in the coming years. This helps remove one of the Mac’s biggest limitations, which is its lack of compelling gaming experiences. Apple’s well-respected arcade subscription service generally also has titles that can be played on its phones, tablets, computers, and even the Apple TV.