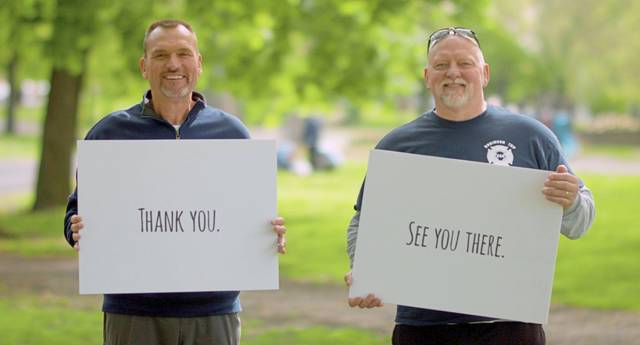 Former Pittsburgh Steelers lineman Craig “Wolf” Wolfley remembered Thanksgiving Day in the 1980s. His friend and teammate Tunch Ilkin invited Wolfley to serve turkey and all the trimmings Life of Life rescue mission on the north side of Pittsburgh.

“There were a lot of fancy dinner parties and galas that I thought we could volunteer, but Tunch insisted I join him at Light of Life,” said Wolfley. “I will never forget the moment when I walked in and saw a mother and a father and two young children. Seeing her broke my heart. It just tore me apart. “

Since then, Wolfley and Ilkin have been supporting Light of Life. They are the faces of the annual homeless walk.

The 19th annual event is Sunday.

Sunday celebrations will take place on the Great Lawn on North Shore Drive on the North Side of Pittsburgh from 11 a.m. to 2 p.m. It’s free and includes food and music. People can donate Here.

Former Pittsburgh Steelers teammates Craig Wolfley (right) and Tunch Ilkin hold up signs thanking the people who support the Light of Life Walk for the homeless. The 19th event is on June 13th.

Wolfley said Ilkin plans to attend Sunday’s event because of his commitment to helping Light of Life. The two chat daily and see each other at least once a week. Last week, Ilkin announced his resignation after 23 seasons from the broadcast booth to focus on his fight against ALS, the debilitating disease that attacks the nervous system.

After her playing days, Wolfley moved to Ilkin on the Steelers Broadcast Team.

“Tunch is my brother,” said Wolfley. “God brought us together 41 years ago. My mother says she has four boys and my sisters call him brother. He fights every day. Tunch is a guy who never gives up, never gives up. “

The entire Light of Life Rescue Mission organization is honored to have Tunch and Wolf as friends for more than 35 years, said Doug Smith, Light of Life development director.

“Since walking through the doors of the Mission, they have continued to bless our organization by volunteering, conducting Bible studies with clients, speaking at chapel services, doing the Tunch & Wolf’s Walk for them

Homeless 19 years ago and a lot more, ”said Smith.

Wolfley said they would have more volunteers than participants for the first walk. The event continues to grow, he said.

The aim is to raise US $ 100,000 for the mission to provide food and shelter for men, women and children affected by homelessness, poverty or addiction.

The money raised will go to the “Thanks a Million” campaign to raise $ 1 million in honor of Ilkin and Wolfley “Tunch & Wolf”, who have supported the organization for 35 years. The funds will help fund the renovation of a building for long-term residential programs.

“Light of Life is a wonderful organization that is changing people’s lives and making a difference,” said Wolfley.

“One meal can make a difference in a person’s life,” said Wolfley. “The first Thanksgiving I spent there definitely did it for me.”

JoAnne Klimovich Harrop is a contributor to Tribune Review. You can contact JoAnne at 724-853-5062, jharrop@triblive.com or via Twitter .