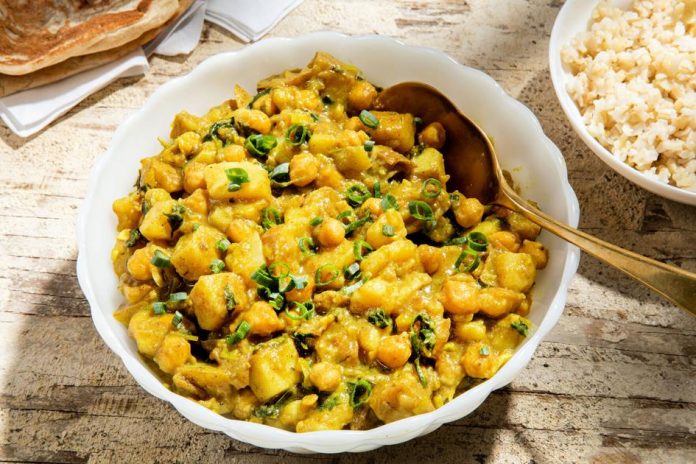 The simplicity of aloo and channa in the Trinidad style is undeniable. Creamy Yukon Gold potatoes are coated with curry powder and then boiled until soft. Canned chickpeas are added, and the whole pot is then zapped with a bright burst of flavor and heat.

This vegan mash-up is both invigorating and forgiving. it sticks to the bones without using a lot of elbow fat. Behind the no-frills list of ingredients and everyday lightness, however, there is something more electroplated – an improbable story of origin that traveled across the seas.

In the mid-19th century, after slavery was abolished in the Caribbean and other British colonies, the first group of identified laborers from India was brought to Trinidad and Tobago on a ship called the Fatel Razack. This indenture system was intended to replace the formerly enslaved workers, but for the Indian immigrants, the terms and contract of their tenure were oppressive and predatory.

Despite the tough beginnings, East Indian customs – both culinary and cultural – continue to have a significant and celebrated influence in Trinidad and Tobago.

The Indian arrival day is celebrated every May to commemorate the emergence of a new culture in the twin island nation. Many Indian foods – and how they are prepared – have been adapted to the new tropical locale.

This Trinidad-style aloo and channa stew clearly borrows a side from the classic Indian version popular across the subcontinent. “Aloo” is the Hindi word for potato and “channa” for chickpeas.

In India, aloo and channa are prepared differently, with a heavy hand made of fresh ginger and tomatoes, turmeric, cumin and garam masala, including spices that give the dish more body and firepower.

However, in Trinidad and Tobago, where the East Indian population makes up 35% of the country’s 1.2 million people, the recipe takes on a bright and deliberate Caribbean twist. Trinidad-style aloo and channa are a product of geographical syncretism, and like many other dishes from the East that have been hybridized in the West Indies, this version shows its own twist. It’s also a little more relaxed.

This Caribbean-themed stew, which makes no apologies for its island location, uses fewer ingredients and comes together quickly, while still adding a great sense of place. For example, the Trinidad version uses ground Chief brand curry powder instead of individual spices. Developed by Sayeed Khan, a grandson of Indented Workers, the brand’s spice blend is a household staple known for its nuanced and prickly taste.

In addition, Trinidad-style aloo and channa are used for the hot, flowery herb culantro. Known as Shado Beni or Bandhania in Trinidad and Tobago, the herb grows wild across the country and is similar to coriander, but its taste is more fire and fight. In the absence of culantro, a combination of spring onions and coriander produces a similar, albeit slightly milder effect. A handful of freshly chopped garlic plus a small addition of fruit chiles – scotch bonnets are ideal, but habaneros are an acceptable substitute – inject the potatoes and peas with bite and dimension.

As a child growing up on the island, I often ate aloo and channa in myriad uses: draped over a bowl of steamed white rice; cocoons in a pillow-like batter for a fried, hand-held, aptly named “aloo pie”; and sometimes hot, straight from the pot, by the spoon, when impatience overwhelmed me.

Now, as an adult, the preparation and eating of this dish is an anchor to my Trinbagon heritage and relieves the bouts of homesickness most acute during these punishing winter months. When I eat the dish, I can access a sweet piece of my childhood in edible form.

I make this dish for my Jamaican husband and our two little “Trin-Ja-Merican” kids – a fitting portmanteau to describe their multicultural heritage – and I appreciate the warmth and filling quality that aloo and channa impart.

Aloo and Channa in Trinidad style

Storage instructions: The stew can be refrigerated for up to 3 days.

Where to Buy: Main Curry Powder is available at Caribbean grocery stores or online.

3 tablespoons of neutral oil such as rapeseed or vegetables

1 (15 ounce) can of chickpeas, drained and rinsed

1/2 teaspoon of chopped habanero chilli pepper (about 1/2 chilli), pitted and chopped, or a few dashes of hot sauce with fruit to the front, such as B. Yellowbird’s hot habanero sauce

In a large, heavy saucepan over medium heat, add the oil and curry powder. Let the curry powder bloom for about 30 seconds, stirring constantly.

Add the potatoes and stir to coat them with the curry oil mixture. Add 1 tablespoon of salt, the black pepper and 1 cup of water. Reduce the heat to medium-low, cover and cook until the potatoes are tender, about 25 minutes.

Using a wooden spoon, mash some potatoes against the side of the pan and stir to thicken the cooking liquid. Add the chickpeas and 2/3 cup of water and stir to combine. Stir in the spring onions, coriander, garlic and habanero and simmer for 5 to 7 minutes, until the chickpeas are warmed through and everything is coated with the golden sauce.

If the stew is too thick or sticks to the bottom of the pot, add 1/3 cup of water. Stir in the remaining 1 teaspoon of salt and a pinch of hot sauce.

Pour the stew into bowls, garnish with coriander or spring onions, and serve hot with naan or brown rice.

La Salle sends its seniors out in type with spring ending...