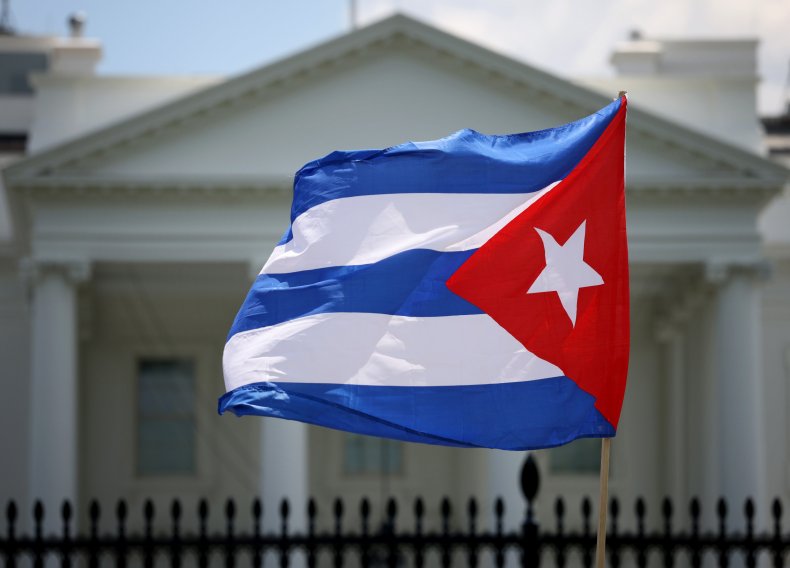 president Joe BidenFull support for large anti-government protests in Cuba appears to have dashed Havana’s hopes for an Obama-style detente between the two nations.

The president broke his silence on the Cuba protests on Monday after criticism of regime change republican suggesting the president and his top officials were too slow to comment on the wave of demonstrations that swept across the island.

“We stand by the Cuban people and their call for freedom and liberation from the tragic grip of the pandemic and from the decades of oppression and economic suffering they have been subjected to by Cuba’s authoritarian regime,” Biden said in a statement from the white House.

“The Cuban people bravely stand up for basic and universal rights. These rights, including the right to peaceful protest and the right to freely determine one’s own future, must be respected. The United States urges the Cuban regime to listen to its people and serve their needs at this important moment, rather than enriching itself. “

Biden’s remarks disappoint leaders in Havana. Before Biden came into office, they hoped he would become president Barack Obama‘s footsteps and thawing relations with the island, undoing Trump’s actions that tightened the US Cold War embargo.

During the election campaign, Biden said he would reverse policies against Cuba, which “harmed the Cuban people and did nothing to promote democracy and human rights”.

The embargo failed to overthrow the communist leadership in Cuba, and critics say the policy unnecessarily hampered the island’s economic development and the quality of life of its citizens. Among these critics is the progressive Sen. Bernie Sanders (I-VT).

“All people have the right to protest and to live in a democratic society,” tweeted Sanders on Monday. “I call on the Cuban government to respect the rights of the opposition and to renounce violence. It is also long time to end the unilateral US embargo against Cuba, which has only harmed the Cuban people, not helped.”

In January, Carlos Fernandez de Cossio – Cuba’s top diplomat overseeing US links – said he hoped for positive action from the new president, telling Reuters: “Everything could be rolled back in the short term if the government wanted it to be. This team has more experience than anyone in the past 60 years. “

Cuban leaders have dismissed the protests as a foreign conspiracy to undermine the government. President Miguel Diaz-Canel said in a televised address on Monday that the protesters at their demonstrations were “counter-revolutionaries” and “completely vulgar”.

“The approach was not peaceful yesterday,” Diaz-Canel said, but acknowledged that given the recent food shortages and power outages – which he attributed to the US blockade – and the impact of the COVID-19 pandemic, “it is legitimate to be dissatisfied to feel “.

Biden’s failure to show a clear break with Trump’s “maximum pressure” strategy will come as no surprise to Venezuela and China, two important Cuban allies. All three nations have long been in the crosshairs of American foreign policy hawks, who see their close ties as a threat to American security in South America and the Caribbean.

All three also have ties to Russia and Iran, two nations whose foreign policy ambitions are unsettling Americans on both sides of the Ganges. Both Beijing and Caracas had hoped that Biden’s election would ease Trump-era tensions.

The former president started a major trade war with China, supported pro-democracy protesters in Hong Kong and used the COVID-19 pandemic as yet another opportunity to attack Beijing, where Communist Party leaders were accused of covering up the origins of the pandemic and the extent of its early spread.

Senior Chinese officials warned the new Biden team that the conflict between the world’s two largest economies would be a “disaster” and called for cooperation, while warning the White House to stay out of China’s domestic affairs.

But a split summit between senior American and Chinese diplomats in Anchorage, Alaska, in March set the tone for the Biden administration’s approach to Beijing.

Foreign Minister said during a lengthy spit on camera Antony Blink said Chinese actions “threaten the rules-based order that maintains global stability” and said the US would “address our concerns, our priorities directly, with the aim of moving our countries forward with clearer eyes.”

National Security Advisor Jake Sullivan added: “We are not looking for conflict, but we welcome fierce competition and will always stand up for our principles for our people and for our friends.”

“When the members of the Chinese delegation arrived in Alaska, they felt not only the cold Alaska weather but also the hospitality of the American host,” he added.

In Venezuela, President Nicolas Maduro remains in power despite the Trump administration’s efforts to oust him. The US still recognizes the self-proclaimed interim president Juan Guaido as Venezuela’s legitimate leader, but the 37-year-old’s attempts to seize power have repeatedly failed, despite American and European support.

The Biden government has reiterated its support for Guaido, who was reportedly threatened by armed security forces at his home on Monday. Blinken spoke to Guaido in March to reiterate American support for free and fair elections, while Biden wrote to the opposition leader last week.

“Under your leadership and in coalition with civil society leaders, you are upholding these ideals of freedom, democracy and sovereignty,” Biden wrote in the letter sent through the Venezuelan Affairs Bureau in Colombia, AFP reported.

Years of corruption, mismanagement, falling oil prices and international sanctions have undermined Venezuela’s economy and left the authoritarian left government dependent on its Chinese, Russian and Cuban supporters. Millions have fled the deteriorating conditions in Venezuela as Maduro and his loyal military officials suppress dissent.

A senior White House official told Reuters in May that Maduro had sent “signals” to the new administration in hopes of easing crippling sanctions.

“We are monitoring these developments very closely,” said the official. “We see Maduro sending signals, but here too we will act on the basis of really concrete measures.”

In February, a White House official told Reuters that the government was “in no rush” to ease Trump’s tough sanctions against Venezuela.

“If the regime takes confidence-building measures that show it is ready and willing to have real talks with the opposition … official said.

In June Maduro appealed directly to Biden to end the “demonization of Venezuela” and lift the sanctions.

But a State Department spokesman said later Bloomberg that the pressure would not ease as long as “repression and corrupt practices” persisted by Maduro and his supporters.

With Cuba, Venezuela and China, Biden seems to be in no hurry to break away from Trump’s militant and sanction-driven foreign policy playbook.

Cuban Americans demonstrate outside the White House in support of the demonstrations in Cuba on July 12, 2021 in Washington, DC
Win McNamee / Getty Images