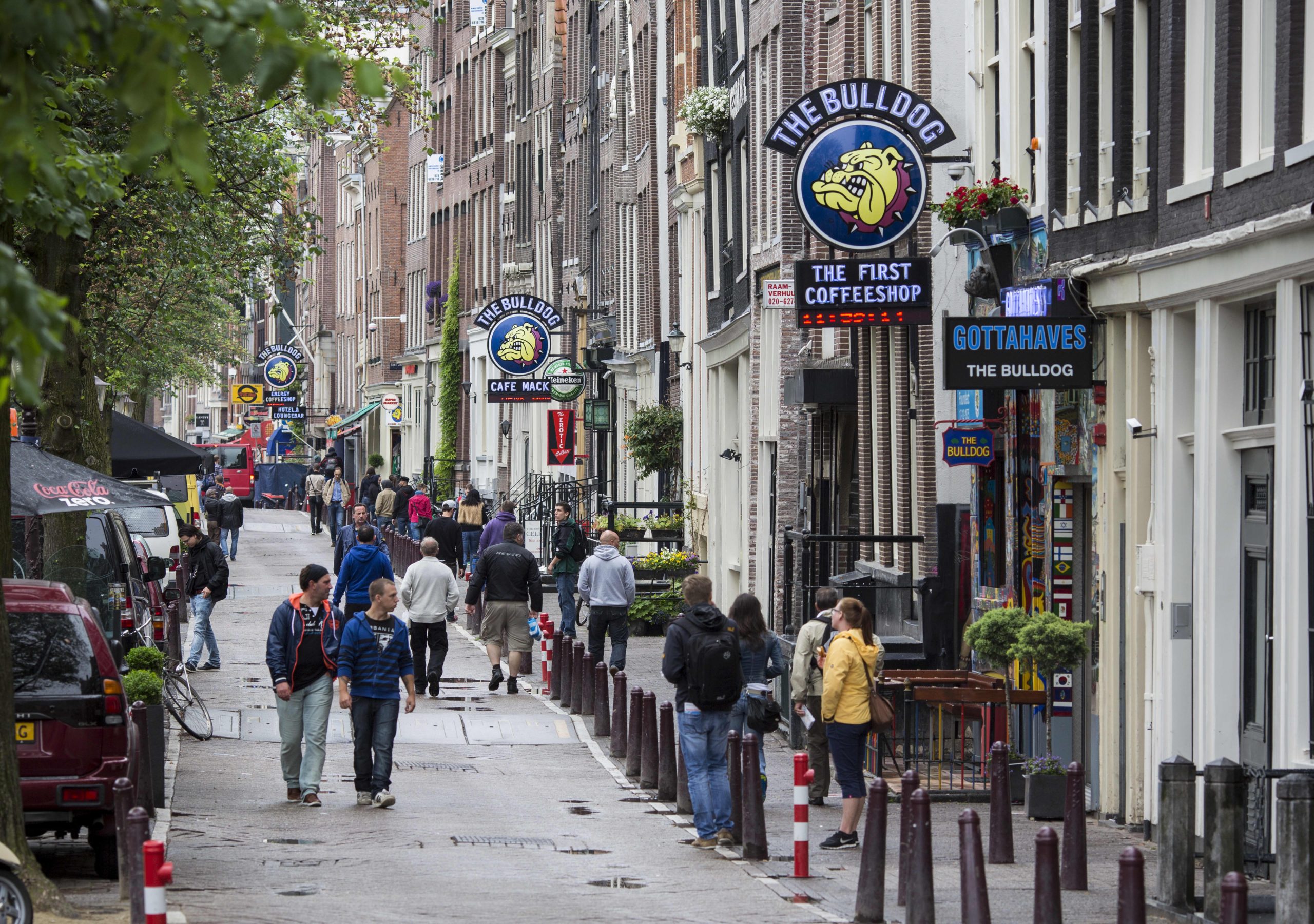 A view towards Oudezijds Voorburgwal, lined with coffee shops in Amsterdam.

Amsterdam has long been a magnet for millions of tourists from Europe and beyond, with many drawn to the city for its canals, architecture and museums and, of course, its numerous cannabis-laden coffee shops and unabashed sex industry.

But Europe’s so-called “City of Sin” has not been the same since the outbreak of the Covid-19 pandemic, and tourism numbers were significantly lower than in previous years, when the Dutch capital could expect millions of visitors a year.

While many locals love the fact that they can wander and cycle through their city without avoiding the tourist crowds, Amsterdam businesses that rely on visitors – like coffee shops where cannabis can be openly bought and sold – are feeling the pinch, and it fears that local authorities may soon take action against their overseas customers.

“It’s definitely been a quiet year,” Ben, who works at Barney’s Coffeeshop, told CNBC on Wednesday. “Apparently [it’s better] compared to last summer with Corona[virus]but this year it started to get crowded but still nothing compared to the years before. Only really French tourists come by, French and German, not many British, not many Italians anymore. “

“I think now that the school holidays are over I don’t think it’s going to be too much,” he added.

The Dutch tourism industry is still recovering and has a way to go before reaching pre-Covid activity levels.

A customer buys marijuana in a cafe in Amsterdam city center on January 8, 2021.

Mike, a customer and retail manager at Green House, which has several coffee shops in Amsterdam, said business has grown since the country reopened and restrictions were lifted, but it is still not at its peak.

“The coffeeshops in the center are busy again … but it’s still quieter compared to normal years, but it has picked up again in the last month,” he told CNBC on Wednesday, noting that the coffeeshops had adapted to new rules such as social distancing between tables and the use of outdoor patios.

Mike noted that during the Covid-19 lockdown, coffee shops had “suffered a lot” over the past 18 months. The Dutch authorities initially announced that coffee shops would have to close at short notice when the country’s first lockdown began last spring.

However, the government quickly reversed course. after queues in front of coffee shops. Customers wanted to stockpile supplies before closings, and authorities feared cannabis sales could quickly take to the streets and illegal and unregulated drug trafficking could flourish.

In the Netherlands, Selling drugs is illegal, but the Dutch government tolerates the sale of soft drugs in coffee shops which are strictly regulated.

Despite being allowed to stay open, opening hours were shortened and travel bans meant that a large proportion of their customers, tourists, could not visit until this summer when the Netherlands opened trips to some countries.

However, there are still restrictions for visitors from some countries with higher Covid rates (as in many other countries, the Netherlands have set a traffic light system of red, yellow and green depending on the number of cases) and some have PCR tests and quarantine rules, many tourists further deter.

Locals enjoy the peace and quiet

Many locals are fed up with the groups of younger tourists who come to Amsterdam on soft drugs for their tourism and have enjoyed the lower numbers over the past 18 months.

Lieke, an Amsterdam-born woman with a young daughter, told CNBC that she enjoyed the quieter city but didn’t think coffee shops should be a no-go area for tourists, and banning tourists would be discriminatory.

Open smoking of cannabis is prohibited in some parts of Amsterdam.

Otto, an economics teacher who also lives in Amsterdam, agreed that as a resident it was “very nice to get our ‘own’ inner city back” instead of having to deal with “screaming and stinking” (stoned and drunk) tourists.

When asked whether tourists were a nuisance in coffee shops, Otto answered unequivocally: “Yes.

In particular, Amsterdam has a problem with young tourists who “feel overwhelmed because they can smoke weed legally, although and because of their young age it is difficult for them to eat the right amount”.

The Dutch capital attracts a wide variety of tourists – from the inevitable groups of young people who want to experience the city’s coffee shops to the stag and hen parties that make the seemingly mandatory visit to De Wallen, Amsterdam’s main red light district.

But the city also attracts those interested in culture who visit the city’s museums and stroll through the picturesque canals to simply soak up the city’s unique character. Local officials seem keen to clean up the city’s image as a party town and instead want to attract more of this latter group of tourists to the city.

“You’re going to shoot yourself in the foot [if they do that], it’s not a good idea at all, “remarked Ben of Barney’s Coffeeshop.” You’re going to lose half the atmosphere that Amsterdam has had in the last 20 years. Not only the coffee shops will suffer, but also the hotels, the fast food restaurants, everything. “

Likewise, Mike of the Green House Coffeeshops Group said such proposals to ban foreign tourists were “ridiculous” and “would result in a huge reduction in tourism.”

“I think the emphasis on tourists coming here and visiting coffee shops is wrong because almost everyone who comes to Amsterdam at some point is interested in visiting a coffee shop, even just for a coffee. They just want to experience what it is like. And when you go to one of our coffee shops, it’s not just young English people who are drunk, most smokers don’t even drink. “

“The culture has changed in the last 10 years and we see all ages in our coffeeshops, 70-20 year olds and people in business suits who come after work to relax for half an hour,” said he.