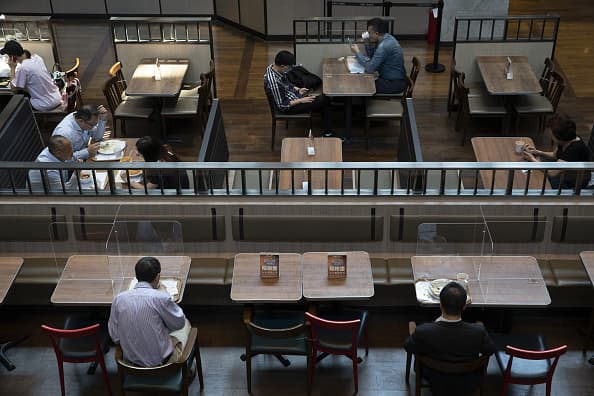 Transparent barriers enforcing social distancing measures can be seen on tables in a Hong Kong restaurant on Tuesday, April 21, 2020.

From bars and pubs to sports venues and karaoke rooms, Hong Kong will ban most public activities from Friday.

The Asian financial center will impose strict Covid-19 measures for two weeks – from Friday to January 20 – as the city prepares for the spread of the highly contagious Omicron variant. They’ll be checked in a week.

“We are facing a very dire situation of a major outbreak in the community at any time, and so we must take very decisive action,” CEO Carrie Lam said on Wednesday as she announced a series of tough measures to contain the outbreak as early as possible.

The government announced that incoming flights from eight countries will be banned from Saturday to January 21st. These are: Australia, Canada, France, India, Pakistan, the Philippines, the United Kingdom, and the United States.

Hong Kong recorded 38 new coronavirus cases on Wednesday and has 12,708 confirmed cases to date. according to a government website.

So far, 73.4% of the total population has received two doses of a vaccine as of Thursday. according to government information.

Tightened social distancing rules include a ban on eating in restaurants after 6 p.m., closing theme parks, museums and venues, including fitness centers and bars.

The government is also canceling a mass cycling event, Cyclothon, and entertainment venues such as Hong Kong Disneyland, cruise ship tours, as well as nightclubs and karaoke events for 14 days starting Friday.

Here is a list of everything that will close on January 7th. 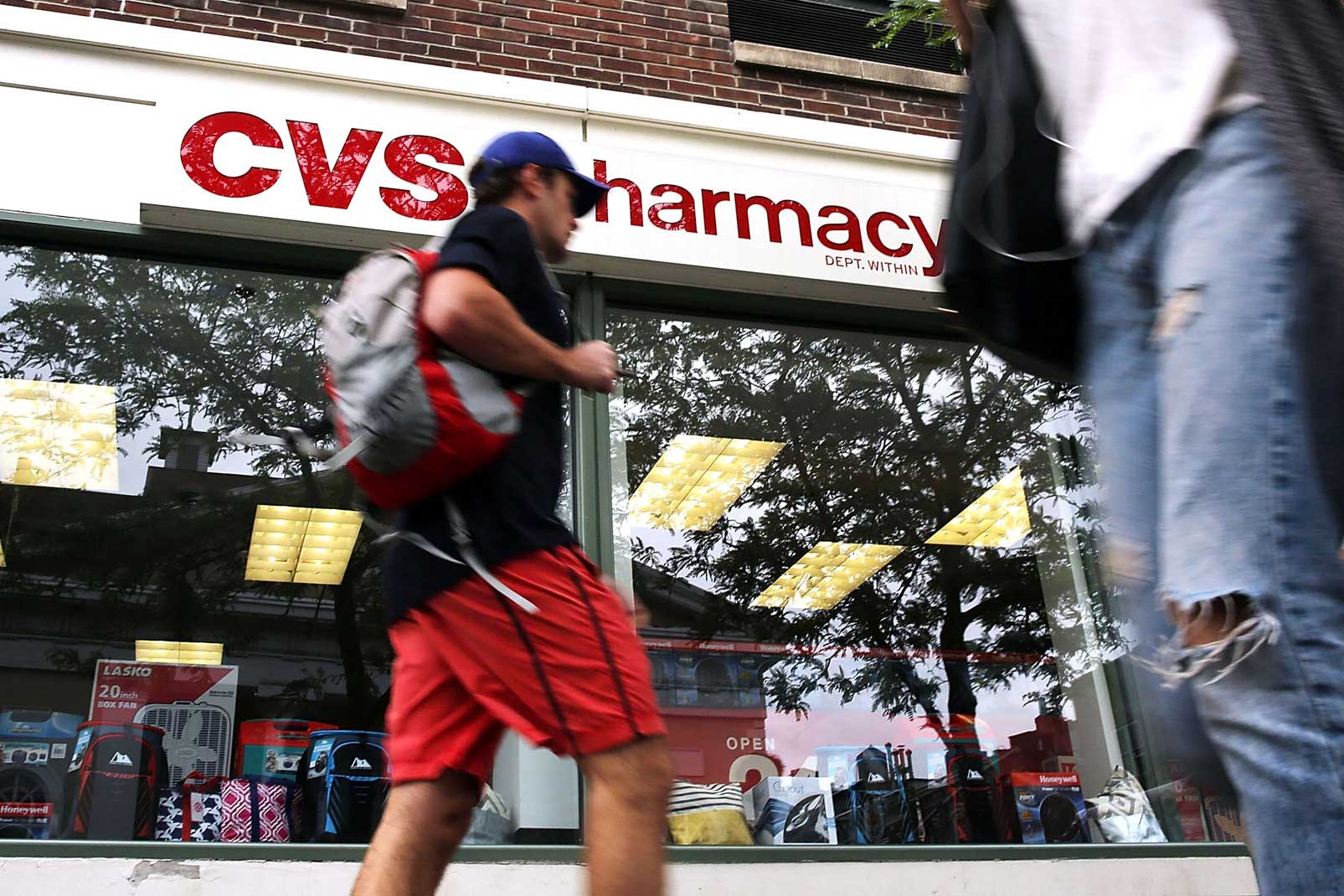 CVS health said Thursday that it will close about 900 stores over the next three years as it adapts to shoppers who buy more online.

The company announced in a press release that it will focus its efforts more on digital growth and transform its businesses into travel destinations that offer a range of health services, from flu shots to diagnostic tests.

Store closings will begin in spring 2022. The company plans to close around 300 per year. Overall, the closings will account for around 9% of the nearly 10,000 CVS stores in the United States. The company declined to share the specific locations of the stores that are closing.

CVS didn’t say how many employees will lose their jobs due to the closings, but said it will help those affected find another opportunity or role in a different location.

CVS mixes up its business as the pandemic accelerates changes in consumer behavior. More and more people are filling out prescriptions online, picking up personal care items by picking them up from the roadside and visiting doctors via telemedicine. The drugstore chain and health insurer announced that they are closing stores due to changes in the population, customer habits and health needs.

However, CEO Karen Lynch said business will continue to play a key role.

“Our retail stores are fundamental to our strategy and our company,” she said in a press release. “We continue to focus on the competitive advantage our presence in thousands of communities across the country provides that complements our rapidly growing digital presence.”

CVS is in the process of converting more of its businesses into health goals, which could lead to more pedestrian traffic and more claims for its insurance business. There are already around 1,100 MinuteClinics that provide urgent help with common diseases such as streptococci or give flu vaccinations.

A store format called HealthHub has been expanded. These locations sell a wider variety of medical products, offer more services from mental health therapy appointments to chronic disease screenings, and have other wellness features like rooms where yoga can take place.

The company plans to have 1,000 HealthHub locations by the end of the year.

CVS plans to use three different store formats. One group will provide basic services. Another one will be HealthHubs. And a third will remain traditional businesses filling out recipes and selling items from shampoo to milk.

In addition, the stores will be further integrated into the health insurance business Aetna, the Acquired in 2018. Some of its benefit plans encourage Aetna members to seek help in CVS businesses, such as its MinuteClinics with little or no co-pay.

CVS spokesman TJ Crawford said in addition to reviewing store density and market dynamics, the company had decided which stores would stay open or closed based on the number of people with Aetna and Caremark coverage nearby. He said it also takes into account the needs of underserved communities.

‘Stuck in the past’

CVS has outperformed its Wall Street drug store rivals as its healthcare acquisitions and focus attract investors. The stock is up about 38% this year, outperforming its 31% growth S&P 500. Stocks hit a 52-week high of $ 96.57 earlier this month and traded just below $ 95 on Thursday lunchtime. Its market value is $ 125.15 billion.

Yet the entire drugstore industry is affected by disruption, as a retail giant including Amazon and Walmart – and even like discount stores Dollar general cracked in healthcare and chased market share.

This competitive landscape has forced CVS and its competitors to Walgreens Boots Alliance and Ritual helpto take a close look at how they can stand out from others and stay relevant. They got a boost in sales during the pandemic as consumers turn to stores for Covid-19 tests, vaccines, and more recently, home test kits – and sometimes toss other items in their carts as well.

Neil Saunders, managing director of GlobalData, said the high number of CVS store closures was a natural consequence of the company’s own development. He said it had “neglected stores for far too long and pushed some of them into the downward spiral of irrelevance”.

“The retail side of CVS ‘business is shabby,” he said. “Too many stores have stuck in the past with poor lighting, depressing interiors, messy merchandising and poor assortment.

How CVS is languishing in stores, he said target, Walmart, Ulta beauty and Sephora stole part of their business. Now more shoppers are going to these retailers’ stores to buy makeup, lotion and cold medication, he said.

To turn things around, CVS needs to clean up its act, he said.

“Your future depends on real investment in both retail and healthcare,” he said. “And there is no point simply investing in health services if the environment in which they are presented is bad: consumers have a choice and will just move their business elsewhere.”

CVS expects the proposed store closings to decrease in value by $ 1 to $ 1.2 billion, or $ 56 to $ 67 cents per share, in the fourth quarter. The depreciation includes the cost of operating leases, property, plant and equipment.

As a result, the company expects earnings between $ 5.46 and $ 5.67 per share for fiscal 2021. It had previously forecast a profit of between $ 6.13 and $ 6.23. The adjusted earnings per share forecast remains unchanged as the impairment loss is not included in these results.

CVS is also changing some of its leadership roles. It created a new role, Chief Pharmacy Officer, and appointed Prem Shah to the position. Shah and Michelle Peluso, Chief Customer Officer, will become Co-Presidents who will run the two parts of the company’s retail business – the front of the store and the pharmacy. Both will report to Lynch who took over the top management role in February.

Neela Montgomery, President of CVS Retail / Pharmacy, will leave the company in late 2021.