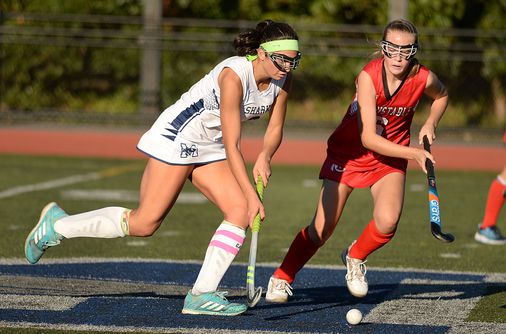 The sharks are no longer in doubt.

Monomoy has a 7-1-1 start, and when the first iteration of the MIAA Power Rankings was released last week, the Sharks were # 1 in Division 4. That’s nothing to sneeze at considering the game in which is high profile Cape & Islands this season.

While the players may not have been sure how the season would go, new coach Kathryn Andreoli was confident that the team had the courage to go far.

When Andreoli was hired, she emphasized the conditioning of her players and realized that this was the component that could push her over the top. “I try to improve them in every area of ​​the game,” said Andreoli, who was a three-sport athlete at Worcester Academy and later worked as a rowing team at Clemson University.

“We’re much better conditioned this year,” said DiGiovanni, who has already scored 18 goals. “She urges us to be the best we can be.”

The redesigned team also highlighted the improvement in areas that may not be on a scoresheet.

“I definitely have a more rigorous approach to coaching,” said Andreoli. “I teach personal responsibility and responsibility. First and foremost, we are principled. (The team) has adapted very well to it. “

“We have a team bond that we didn’t have last year,” said Caroline Upson, another senior tri-captain at Monomoy. “I have the feeling that we have a lot of trust in each other. Everyone knows what to do. Nobody says, ‘Oh, this is not my job.’ “

Monomoy got off to a hot start, winning its first three competitions with 6, 5 and 8 goals, including two shutouts. A fiery Falmouth squad presented the toughest challenge of September and resulted in a 3-3 draw. It was a game against Nauset on September 24th that convinced the Haie that things were coming together. With the game goalless, Susannah Brown and DiGiovanni met in the fourth quarter to win Monomoy 2-0.

“We worked so hard during the Nauset game,” said DiGiovanni, two-time C&I Lighthouse MVP. “We didn’t put up with the 0-0 in the late phase.”

It speaks to another lesson Andreoli taught the team: focus on the present rather than looking back or looking too far into the future.

As Monomoy progresses through the final month of the regular season, which includes Friday’s rematch against Falmouth and games at Nauset and Sandwich, that piece of advice will be crucial. The Cape & Islands League has proven to be one of the toughest in the state.

“The Cape has always been a strong league when I played field hockey,” said Andreoli. “There are so many multisport athletes on these teams, which I think makes better players. These players also take the time to improve their field hockey. We definitely see strong teams here. “

With the extra elements Andreoli added, Sharks are one of those strong teams.

“It was a good experience,” said Upson. “We’re good individually and she’s helped us come together and play as a team.”

▪ Brooks School and Phillips Andover are only 6 miles away from each other, and in recent years the two prep school programs have faced stiff competition from their non-league competitor. Last Thursday, the squads faced each other for the first time since 2019 when Andover got away with a 1-0 win. In the long-awaited rematch, Brooks fell 3-1, despite strong play on either side and a 12-saving performance from freshman Kyleigh Matola (Coventry, RI).

Brooks plays a schedule full of NEPSAC Class A opponents, and Trainer Tess O’Brien prides herself on her team’s performance against such talented teams.

“It can always be intimidating to play in bigger schools, but I think our girls really get to play,” said O’Brien. “There’s just a lot of sand.”

O’Brien said much of her team’s success can be traced back to a culture rooted in respect and inclusivity.

“I can’t say I’ve been part of too many teams that have such a wonderful relationship on and off the field,” said O’Brien. “There’s a lot of support from our senior class members.”

▪ The first MIAA Power Rankings were published on Friday, with the scores being used until September 30th. In Division 1, Winchester is # 1, while traditional Western power Longmeadow was at the head of Division 2. The always dominant Watertown program leads Division 3 and Monomoy. an occupies first place in the 4th division. . As noted, the two Capes – Cod and Ann – always have state contenders, and the new power rankings prove it. Both the Cape Ann League and the Cape and Islands League each have five teams in the top 10 of their various division rankings.

Games of the Week

Thursday, Hingham in Plymouth North, 4pm – Saturday, Patriot League rivals fought hard for a 0-0 draw on Saturday. On Tuesday, the Harbourwomen defeated Plymouth South 3-0, while the Blue Eagles suffered a 2-0 loss to Pembroke.

Friday, Acton-Boxborough in Lincoln-Sudbury, 4 p.m. – These Dual County enemies have only lost one league so far – both to Concord-Carlisle.

Friday, Falmouth at Monomoy, 6pm – Both teams made huge leaps in the power rankings this week. This fight will have a huge impact on the Cape & Islands League rankings.

Saturday, Watertown in Winchester, 10 a.m. – Winchester holds onto its unbeaten record with two draws. An out-of-league tilt against Watertown, an offensive juggernaut, will be a major test.

Monday, Walpole at Franklin, 7pm – This non-league game between two undefeated teams is becoming the showdown of the season. Walpole has yet to admit one goal while the Panthers outdid their opponents by 60-4.