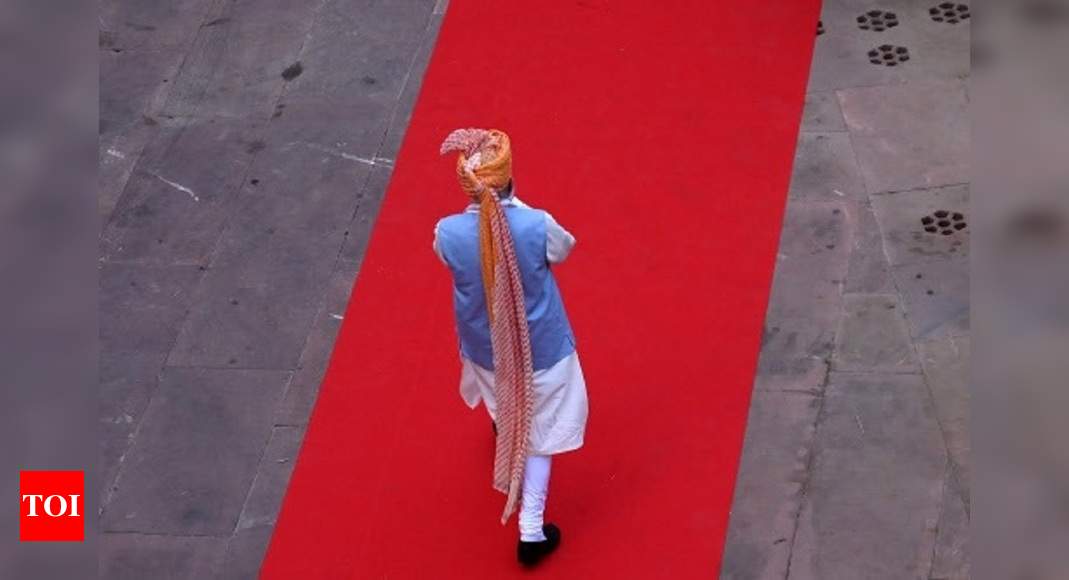 NEW DELHI: Prime Minister Narendra Modes continued his tradition of wearing a colorful safa (head covering) during his Independence Day speech to the nation at the Red Fort in the state capital.
The prime minister’s eye-catching choice of headgear, starting with the bright Jamnagar Pagdi, a Bandhani turban from Kutch on a Rajasthani Safa, has become a topic of discussion in the past.
That year, he opted for a Kolhapuri Pheta-style turban with a long trail that reached to his ankle when speaking to the nation on the country’s 75th Independence Day. He combined the Safa with a pastel blue half-sleeved kurta, now known as “Modi Kurta”, and a stole.
In 2014, in his first Independence Day speech, he wore a red jodhpuri bandhej turban with a green trail.
The next year, 2015, it was a yellow safa, while in 2016 it was a tie and dye turban with a pink hue.
In 2017 the Prime Minister wore a red and yellow turban, the next year, 2018, he wore the colors saffron and red.
In 2019, Modi decided on a predominantly yellow-colored, twisted headgear. It had hints of green and red along with a long trail that extended to his ankle. He kept the outfit simple as he wore a plain white half-sleeved kurta paired with his signature tight churidar.
Last year he opted for a predominant mix of orange and yellow colored headgear and, given the situation created by Covid-19, added a scarf, like a mask in white color with orange edges.
Every year the Prime Minister adds a pop of color to the Independence Day and Republic Day celebrations with a unique turban while trying on the traditional headdresses of different states that represent the diversity of India.
Regard Independence Day 2021: “Yahi Samay Hai, Sahi Samay Hai”, PM Modi recites a poem in the Red Fort