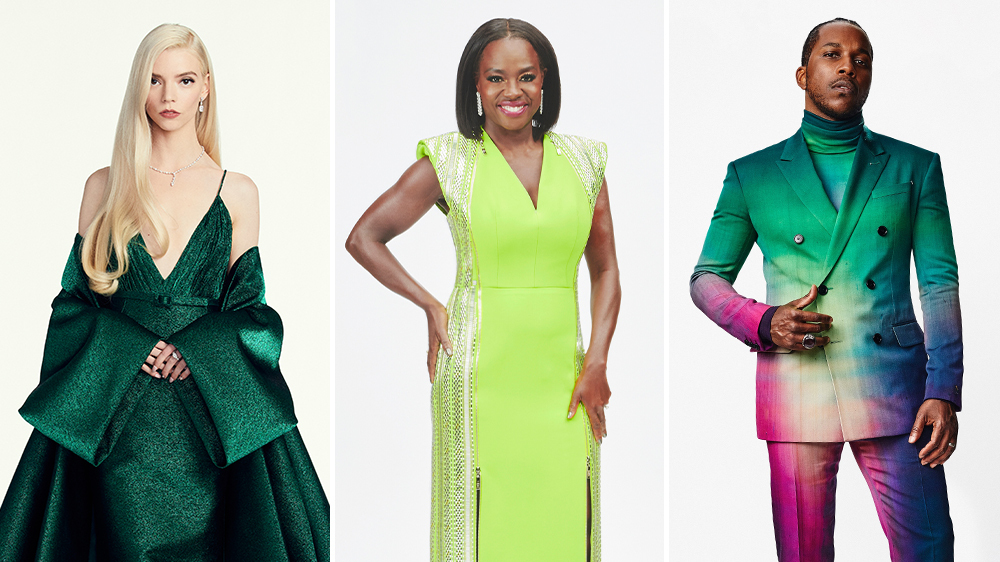 “The awards shows, especially the Oscars, feel like a long-awaited hug we’ve all been waiting for,” says his stylist Avo Yermagyan. “It’s a glimmer of what life was like before the world screeched to a halt. That’s why I wanted to be optimistic at that moment. “

The “sunny yellow” look was his proof that the world was coming back to life. “There is a sense of hope that we are all filled with,” says Yermagyan, who tried to reflect the severity of the pandemic at the start of virtual events.

“At first we were all very careful about the tone we were doing, so we were a bit more reluctant to choose jewelry, etc. But to make up for that, we also give people a bit of escape, beauty and lightness – the we all need. I think as the awards season goes on, people are opening up to taking bigger risks and making bolder swings. “
Yermagyan was looking to One Night in Miami when he donned Leslie Odom Jr. “I had the feeling that men were such changers in their day, so I didn’t want to play it safe when it came to styling,” he says.

For the globes, Odom combined a chocolate brown Valentino Haute Couture suit made of wool with a neon green turtleneck. “I tried to nod to the ’60s with the cuts and colors of the suit, but I still wanted to pack an unexpected punch with the basics and accessories.”

“It could have been a little too literal or costumed, so I put those chunky chain chains on it,” he says. “The necklaces made the look less polite and more punk.”
For the SAG Awards, Odom made his debut in a green and pink Berluti suit, which Yermagyan described on Instagram as a “watermelon amuse bouche”.

“All the rules for getting dressed on the red carpet are being rewritten,” says Yermagyan, who welcomes the ability to stage photos and control the narrative of his appearance. “After a year at home there is a new kind of creativity. We all – from the actors to the stylists – are all unleashed. “

“If you take the context of an actual red carpet and actually have to leave the house, anything goes,” she says. “It was fun to see people in pajamas or fabulous headwear.”

With Davis, Stewart took a “solemn and happy” approach. “If we’re going to have an awards season let’s do it in the best possible way, especially by supporting the fashion industry and designers who have been so hard hit by the pandemic,” says Stewart.

For the globes, Davis wore a brightly patterned Lavie by CK look, which was made from fabric by the Cameroonian designer Claude Kameni.

“Viola wanted a designer who specifically addressed her as a black woman. She wanted to rethink the glamor of the red carpet in the age of more diversity and inclusivity. “

Davis followed with a turquoise dress by Greta Constantine for the Critics’ Choice Awards, an upbeat floral Duro Olowu dress for the NAACP Image Awards, and an award-winning Louis Vuitton SAG Awards look with electric lime.

When dressing Seyfried, Stewart took her surroundings into account. “Amanda’s Globes look was influenced by the fact that she was in Savannah, Georgia,” says Stewart of the coral Oscar de la Renta gown. “We imagined the floral dress in this setting of cobblestone streets and moss trees.”

“It’s fun to think, ‘Would Marion Davies wear this if she were still alive today?'”

“I wanted it to feel like it could have been one of her costumes,” says Roach of the retro cloak look that was custom designed by Dior. “When you think of glamor and sophistication, Dior is probably one of the first couturiers you think of.”

“The gigantic ball skirt with this white tank top was just so modern and young and had a really cool girl’s vibe,” says Roach, who has styled the “Malcolm & Marie” star for 10 years and also designed costumes for the film.

Roach strives for “breathtaking moments”. For the SAG Awards he designed Kerry Washington in an Etro patterned dress with a matching cap and Aldis Hodge in a three-piece Dolce & Gabbana jacquard suit.

“It’s all about how I feel through the clothes, and I pass that emotion on to the customers,” he says.

Stylist Jason Bolden hopes his awards look with Cynthia Erivo uplift. “We really wanted to have fun and bring back some joy and imagination in the middle of everything we’ve been through,” he says.

When Bolden saw Valentino’s Spring 2021 couture collection with piercing hues and towering metal platforms, he thought, “This is a Cynthia collection.” He secured two dresses – a beaded hood design for her “A Grammy Salute” performance and their neon green futuristic globes look. Erivo thought the latter was “divine” – and immediately tried the shoes on and exclaimed: “They feel like sneakers!”

“It was the full view from the runway,” says Bolden. “It was fun, it was fantasy. It was now also a kind of ode to her to be a fairy in ‘Pinocchio’. “

For the Grammys, Bolden was inspired by Erivo’s role as Aretha Franklin in NatGeo’s “Genius”.

“What Aretha and Cynthia have in common is their love of fashion and that they are very open about how they want to do things and being very brave.

The Grammy-nominated star really wanted to dress up, so Bolden worked with Louis Vuitton on the “magical” showstopper made of gold and silver with sequins. “That was an ode to Aretha and this Nubian princess’s game too.”

With Yara Shahidi, Bolden is always looking for “the hardest to wear dress in a collection”. The embroidered Dior Couture look she wore to the Critics’ Choice Awards was the only option
they considered.

“It was super playful, it had that Cirque du Soleil vibe and it was also an ode to the fact that she was Tinkerbell,” he says. “Again, it all comes down to bringing a bit of calm into the chaos, which gives a little bit of imagination, and that’s exactly what this look was for Yara.”

Bolden believes that this season of the awards shows people are “taking fashion to the extreme”.

“Everyone is ready to celebrate themselves and have fun and sit in the chair and laugh with their glamorous teams,” says Bolden, who is looking forward to an iconic glamor at the Oscars.

“For me, I hope people really create this Hollywood moment – what we yearn for and that makes us excited and gives us hope and opportunity.” 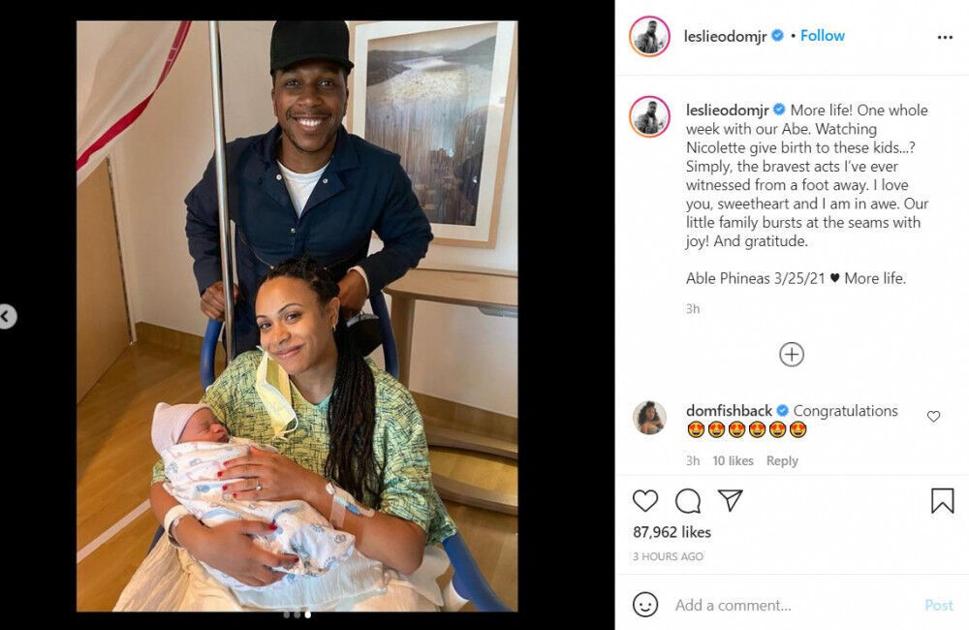 Leslie Odom Jr. has become a father for the second time.

The 39-year-old Hamilton star and his wife Nicolette Robinson welcomed their second child, a son named Able Phineas, after he was born on March 25, the younger sibling of their first child, three-year-old Lucille Rubin.

Lamar Odom has accused his ex-fiancée Sabrina Parr of using him for “fame”.

The 41-year-old former NBA star ended his engagement to Sabrina in November, a year after they announced they were getting married, and Lamar has now claimed that the reason the romance ended was because Sabrina was “very cheating” and used it for his money.

When asked if Sabrina had hurt him, he said, “Yes, in every way. She was very fraudulent. I really liked it, took her word for it and she was like she was really lying to me all the time. I think she got what she wanted and that was the blue check, so I guess I was good for something. “

Lamar then claimed that Sabrina and her manager posted a reality show about the couple without telling him.

The sports star said he knew something [he] signed up for “with the reality series but was not informed when it would air.

When asked what he thought Sabrina wanted from the relationship, he said, “Clout or fame, kind of. The thing about this girl … she and her deceitful manager were supposed to drop this reality show, but they didn’t even tell me they were going to put it out. Who moves like that?

“It was just me and her. I knew what I was doing and I knew what I signed up for, but I thought if you made it available to the world, you would let me know. This is a greaseball move and something I can’t respect from her or her manager. “

And Lamar also said that thinking about lost love makes him “sad”.

During an appearance on ‘The Real’ he said, “When I talk about them, it makes me sad because I don’t really like people taking advantage of me, especially for financial reasons.”

She said: “I find these allegations from Lamar and whoever he works with extremely disappointing. We have not been together anymore and have not been for a while. I made up my mind to speak quietly about the situation and I suggest that you do the same. ” .

“We both know the truth and I assure you that at the end of it no truth will be told. If you excuse me now, I will move on in peace and quiet. (Sic)”