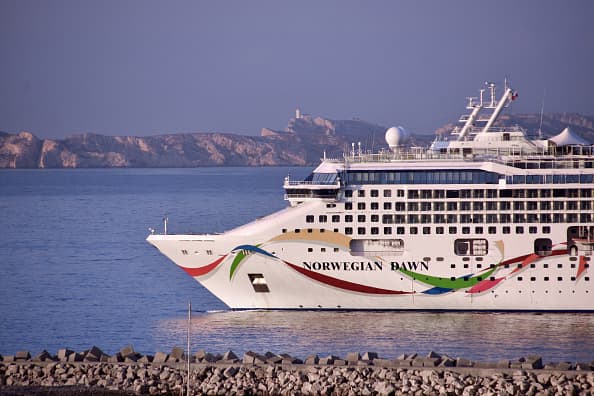 The cruise ship Norwegian Dawn will dock in the French Mediterranean port of Marseille on July 27, 2021.

On Saturday, Norwegian Encore sails from Seattle to Alaska. The cruise operator plans to bring 40% of its fleet capacity into operation by the end of the third quarter and 75% by the end of the year. The company plans to resume full capacity by April 1st.

It will require that all passengers of all three brands be vaccinated.

“We are ready and eager to welcome guests back on board and continue to see an incredible strength in our booking trends for future cruises,” said President and CEO Frank Del Rio.

The company’s shares rose more than 2% in pre-trading hours.

The company performed in the second quarter ended June 30, compared to the expectations of the analysts surveyed by Refinitiv:

With no items, the company lost $ 1.93 per share, which was less than the loss of $ 1.97 per share expected by analysts surveyed by Refinitiv.

Revenue fell to $ 4.37 million, well below the $ 10 million analysts had expected.

However, the company said bookings for 2022, taking into account future cruise credits, are well above the 2019 records.

As of the end of the second quarter, the cruise operator had pre-sale tickets valued at $ 1.4 billion, including $ 800 million from future cruise credits.

As it prepared to go back online, the company had average monthly cash usage during the quarter of $ 200 million, which is higher than last quarter’s value and previous forecast of $ 190 million. The company expects a monthly cash burn rate of $ 285 million for the third quarter, excluding cash inflow from new and existing bookings.

The company expects to report a net loss in the third quarter and beyond until it can resume regular travel.

“As a result of the COVID-19 pandemic, the company is unable to estimate with any certainty the impact it will have on its business, financial condition, or short or long-term financial or operating results,” Norwegian Cruise Line said in a press release.

Norwegian Cruise Line’s shares are down nearly 5% this year as the cruise industry remained closed due to Covid-19.

There were several at the height of the pandemic Sensational outbreaks on board ships This led the Centers for Disease Control and Prevention to impose harsh restrictions on cruise lines.

Cruise stocks rose earlier this year, as vaccinations raised hope for an industry recovery, but the proliferation of the highly contagious Delta variant in recent weeks has reversed the trend in the stock.

Last month, Norwegian Cruise Line filed a lawsuit against the Florida surgeon general End the law of the state that prohibits companies from requiring customers to provide proof of vaccination. In the court filing, the company said it wants its guests to show proof of vaccination on all cruises.

The company’s first scheduled departure from Florida is August 15, which Norwegian says will be a 100% vaccinated cruise.

“The company has been unable to work with the state of Florida to find a mutually acceptable solution that would allow them to request proof of guests’ vaccination status prior to boarding Florida cruises,” Norwegian said in a press release. “[At Friday’s hearing,] the company hopes to have additional clarity shortly on its path to resume sailing from Florida. “