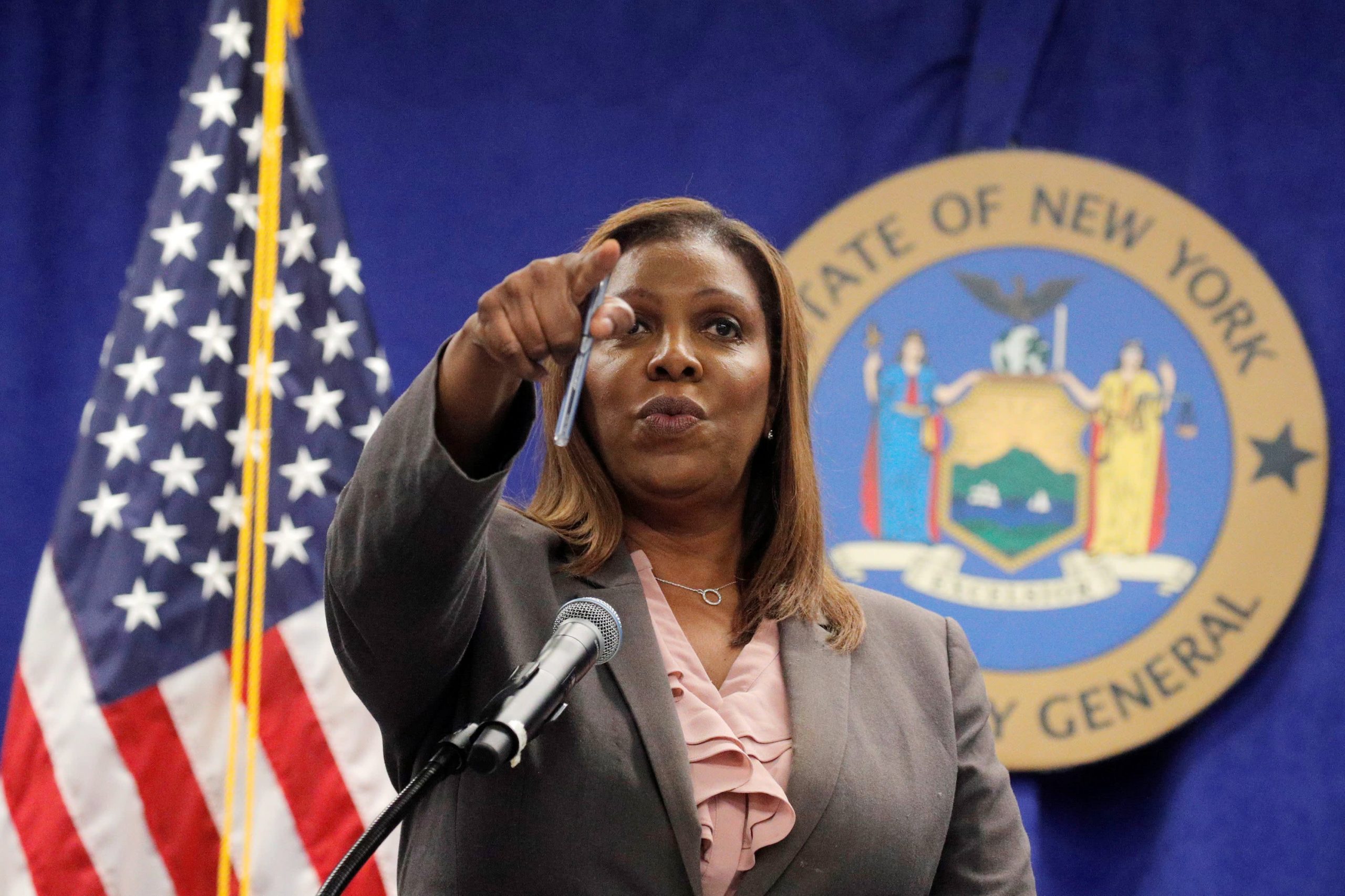 Johnson & Johnson has reached a $ 230 million settlement with New York State that prevents the company from promoting opioids and has confirmed that sales of such products have ceased in the United States.

New York Attorney General Letitia James’s office said in a statement Saturday the agreement prohibits J&J from promoting opioids by any means and prohibits lobbying for such products at the federal, state or local levels.

Johnson & Johnson has not marketed any opioids in the US since 2015 and completely ceased business in 2020.

As part of the settlement, the company will settle opioid-related claims and spread payments over nine years. It could also pay $ 30 million more in the first year if the state executive board signs a new law creating an opioid settlement fund, according to the press release from James’ office.

The settlement follows years of lawsuits filed by states, cities and counties against large pharmaceutical companies over the opioid crisis that killed nearly 500,000 people in the US over the past few decades.

Governments have argued that companies have prescribed the medication too often, causing people to become addicted and abuse other illegal forms of opioids, while companies have stated that they have distributed the required amount of the product to people with medical problems help.

“The opioid epidemic has wreaked havoc in countless communities in New York state and the rest of the nation, and millions are still addicted to dangerous and deadly opioids,” James said in a statement.

“Johnson & Johnson helped start that fire, but today they are pledging to leave the opioid business – not just in New York but across the country,” she said. “J&J no longer makes or sells opioids in the United States.”

The New York opioid lawsuit against the rest of the defendants will begin this week, according to the announcement. Other defendants in the New York lawsuit include Purdue Pharma; Mallinckrodt LLC; Endo health solutions; Teva Pharmaceuticals USA; and Allergan Finance LLC.

In a statement on Saturday, Johnson & Johnson said the settlement was “not an admission of liability or misconduct on the part of the company” and “with the terms of the company previously announced A $ 5 billion fundamental settlement agreement for the settlement of opioid lawsuits and claims by states, cities, counties, and tribal governments.

The company also said it will continue to defend itself against lawsuits that the definitive deal won’t resolve.

James said the state will focus on funding opioid prevention, treatment and education efforts to “prevent any future devastation”.

A Republican-led Michigan Senate committee investigating the 2020 state elections has found there is “no evidence of widespread or systematic fraud” A number of GOP state officials are now pushing for more controversial privately held audits across the country.

A report Michigan Senate Oversight Committee, released Wednesday, rejected allegations of widespread fraud in the November election, including several right-wing conspiracy theories regarding electoral fraud, despite senators saying there were “serious weaknesses in our electoral system.”

The senators exposed a theory alleged voting machines swapped votes in Antrim County, Michigan – Senator Edward McBroom wrote that the allegations would continue to be viewed as “an utter waste of time” – and countered allegations of Dominion voting machine fraud promoted by the MyPillow CEO Mike Lindell.

Michigan’s Secretary of State Jocelyn Benson previously announced in March that more than 250 local audits in the state “confirmed the integrity and accuracy of the 2020 general election”.

Officials in Georgia checked the state paper ballots and found they “confirmed and confirmed” the state vote count, and state and county officials in Wisconsin and Maricopa County, Arizona, have also checked their voting machines and determined that there was no fraud or cases of tampering or “tampered” machines.

Nevada’s Secretary of State Barbara Cegavske – the state’s only nationally elected Republican woman –examined Allegations of electoral fraud in the parliamentary elections and in an April determined report that the GOP’s concerns about electoral fraud in Nevada “do not constitute evidence.”

Pennsylvania conducted a statewide, risk-limiting review of its votes that “provided strong evidence of the accuracy of the vote count,” despite Spotlight PA Remarks that while the audit confirmed that Biden received more votes than former President Donald Trump, it was not detailed enough to confirm the accuracy of the results.

32%. That’s the percentage of US adults who still believe that President Joe Biden won the presidential election for election fraud despite a lack of credible evidence, according to a Monmouth poll carried out from June 9th to 14th.

“The committee can confidently claim that it has thoroughly investigated numerous allegations of illegal activity, improper practice, fraud, vote theft, or any other description that would cast doubt on the integrity of Michigan’s 2020 election results,” it said the Michigan senators wrote in their report. “Our clear conclusion is that citizens should trust that the results represent the true results of the ballots cast by the people of Michigan.”

Trump and his GOP allies have repeatedly asserted that there was widespread voter fraud in the presidential election, and continue to advance those claims, even as more than 60 GOP lawsuits challenging election results fail in court and tests repeat accuracy the vote count confirmed. Federal and state officials, including former US attorney general William Barr said there was no widespread fraud in the elections, and a Statistical analysis The Battlefield States’ results also found “no evidence of fraud, manipulation or uncorrected errors”. The electoral fraud allegations have prevailed despite the lack of evidence on the right, sparking a new wave of controversial state levels Voting restrictions in the name of “electoral security”. Republicans have now also clung to a partisan and privately financed choice exam takes place in Maricopa County, Arizona, which has the Biden administration said could potentially violate federal law by removing ballots from the control of poll workers. The audit will not change the state’s certified election results, but critics warn that partisan recount could further undermine public confidence in the election results.

What to look out for

Audits like the one in Arizona that is going on now just before the end– could soon spread nationwide as lawmakers from states such as Pennsylvania, Wisconsin, Michigan, Oklahoma, Tennessee, and Utah have traveled to watch the exam and have expressed an interest in potentially conducting their own investigations. “You’re definitely writing the playbook here in Arizona to get this type of audit, I don’t want to call it an audit, I want to call it other states,” said Arizona’s Secretary of State Katie Hobbs, a Democrat NBC news. “And it’s dangerous.” Wisconsin Congregation Speaker Robin Vos announced a new survey of the state’s election results in May and the Republicans are pushing with one effort Investigate ballots in Fulton County, Georgia, and other efforts could potentially be made in other battlefield states such as Pennsylvania and Michigan.

Voting machines in Phoenix were not manipulated, audit results (Forbes)

80% of Americans are in favor of the Voter ID rules – but less afraid of scams, poll results (Forbes)

Texas has built a reputation as an urbanizing state that has grown rapidly but has maintained home affordability. From Houston’s lack of zoning to rampant downtown construction in the greater Dallas-Fort Worth area, lighter land use regulation across the country has resulted in increased supply and price pressures.

The best example of this is the municipal utility district (MUD). This is a funding agency that helps developers form independent governments that can issue bonds and tax residents to fund the infrastructure – in short, that a new city can build.

In a typical scenario, developers are assembling greenfield land in an unincorporated jurisdiction. You can find private funding to build the infrastructure, set up a board of directors, and build and sell houses. Once the development generates enough revenue, the MUD – regulated by the Texas Commission on Environmental Quality – will reimburse the developer and purchase the bond debt for a particular infrastructure.

Texas has over 900 MUDs, with a strong focus around Houston. They are generally suburban neighborhoods with cul-de-sacs, large retention lakes, and upscale public amenities. But some – like The Woodlands, a community of 116,000 north of Houston, and perhaps the best-known MUD – contain dense New Urban-style city centers.

I see three advantages of MUDs. First, they offer relatively affordable housing in an often upscale setting. Bridgeland, a 11,400 acre community being built by the listed Howard Hughes Corporation, has new townhouses as of 2019 the top $ 200,000, while The Woodlands, which is several decades older, far cheaper offers listing. The raw housing supply from Houston’s MUDs has put pressure on home prices elsewhere in the metropolitan area.

A second benefit is that MUDs are not as prone to bankruptcy as other developments. A frequent criticism of urban sprawl is that the overburdened infrastructure, which is supported by too few households per hectare, causes maintenance costs that become unmanageable and are socialized to outsiders. MUDs usually avoid this.

Much of the infrastructure that would normally be “public” – roads, parks, drainage, sewers, water – is built in advance by the developers, which means they are the main risk takers. Over time, the costs are distributed, but mostly among those who live in the MUD. Many MUD utilities are funded by usage fees. In many cases, homeowners pay an additional property tax in excess of what they are paying to Counties. Roads are the most common thing MUDs transfer to the district jurisdiction, while the MUD can contract with the district to provide other services like enhanced public safety. Crucial writes broker Julie Teacher, “MUD [tax] Interest rates … generally decrease over time as the MUD’s operating and debt servicing costs are shared by more homeowners. “

Texas MUDs are not unique – many states have alternate government districts that can be used to collect special taxes or develop unincorporated territories. But “the Texas MUD,” says Howard Cohen, an attorney specializing in MUD transactions, “is more or less the gold standard when it comes to these types of districts and how the national bond market views stability.”

MUDs are essentially a small step towards a private city model. This idea has gained traction well beyond Texas. Theorists like NYU economist Paul Romer advocate “charter cities” and the German entrepreneur Titus Gebel pumps “Free Private Cities”. The premise is that smaller administrative units should be able to open up within larger ones and make their own rules. The perceived benefit is that this will lead to competition between governments, driving them to reform and improve services to keep residents. The criticism is that there will be Balkanization, making it more difficult, for example, to plan large public infrastructure projects or uniform school districts.

MUDs are not completely autonomous, so they do not accurately reflect these advantages or criticisms. MUDs still have to follow county and state rules, sometimes joining existing school districts, and eventually having an elected board of directors just like in a conventional city. But they are moving in the privatized direction: the developer can plan the city (counties in Texas have no zoning), set tax rates and otherwise regulate everything at will. This helps MUDs adapt to market forces and population demands in ways that traditional US cities do not.

That’s partly because after the bankruptcy of some MUDs in the 1980s, the state tightened rules on financial accountability so MUDs had to be in a better tax position before developers could transfer infrastructure. Now bankruptcies are rare, and even when they do occur, Costs are included within the MUD. This brings discipline into a community model that offers cheap housing and hyperlocal, relatively autonomous self-government.