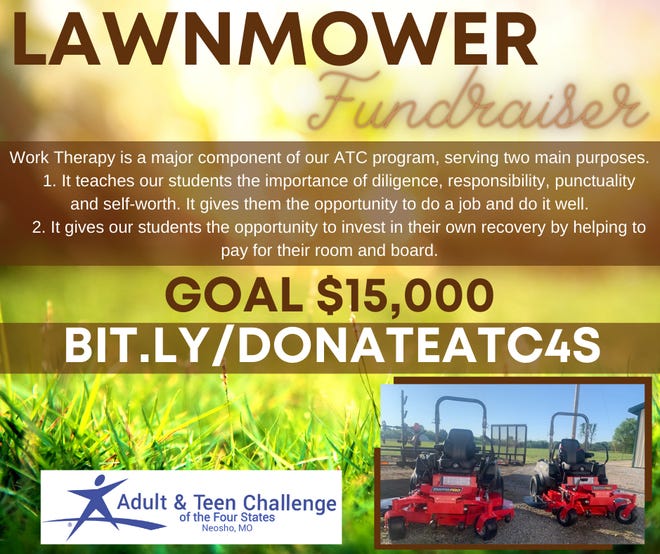 The four states’ Adult and Teen Challenge (ATC) in Neosho is working to repay a $ 15,000 loan for two new mowers for their occupational therapy program.

ATC programs are a faith-based care program for young people and adults struggling with life control issues. They range from six to 12 to 18 months and consist of Bible studies, work programs, education and much more Neosho has been around for around 25 years.

As a 501 (c) 3 nonprofit organization, they are funded through their work programs, which mainly include cutting wood in winter and mowing the lawn in summer, as well as spring and donations.

The occupational therapy program not only funds the program participants’ room and board, but also provides them with skills that they can use after leaving the program.

“You are going to have some people who have never worked for a day,” said Jason Davis, who directs the occupational therapy program at ATC. “I’ll let them work on the property for the first week or two to get an idea of ​​what they can do. When I know they have a certain area to excel in after having mowed lawns or felled trees, then I’ll place them there. “

Last summer, most of the profits went into repairing older mowers.

“Throughout the last mowing season, much of the profit went into repairs,” said Zach Norris, ATC director of Central and Southwest Missouri. “This year we borrowed two new mowers and we could buy them for $ 15,000.”

The ATC has seen a number of setbacks in recent months, including fewer donations received during the pandemic and stripped of their wood cutting equipment last winter.

“It’s like we’re working so hard and we can’t get anywhere because of various things,” Norris said in an email to the Neosho Daily News.

“It was someone who knew where things were, someone who worked here,” added Norris last week. “It was very disheartening.”

After their wood cutting equipment was stolen, the ATC was redesigned where they kept it more secure, including better locks and bars on the window. But it happened again.

“A newspaper man came out and wrote a story about the community that helped us get new saws,” said Norris. “We had these new saws; The reporter took a picture of these new saws and that night (they were stolen again). “

Last year the program raised funds for a needed new van and this year they are raising funds to repay the loan for the new mower as soon as possible.

The mowers, which were 11 to 12 years old, required daily maintenance, and the services needed to repair them were only offered at certain locations.

“They’re only made to run an average of 3,000 hours on one engine,” said Davis. “When I took over the department, those older mowers, we exchanged spindles and other things that were running out on them. The next thing you know is an engine failure. They didn’t have the right systems to do the amount of work we do for the season. “

“Last year it seemed like we had to fix every dollar we raised,” said Norris. “Now we have a fresh start and we will do our best to look after (the mowers), wait and not let anyone work on it.”

Although it was a busy time for a program to help people get their lives back on track, ATC staff used it as an educational moment. Whether it was in their immediate reaction to their saws being stolen the next day, or how they reacted to the pandemic that prevented work opportunities and visitors.

“We teach them that you have to take care of (yourself) in life or when you have a family,” said Davis. “Our timber season last year was the highest it has ever been, even when we were knocked off. This setback was not just once but twice a slap in the face. “

“But we knew that we had to prevail. We couldn’t give up, ”added Davis. “If the students here saw us giving up, if the church saw us giving up, the support we had would run dry. We had to continue to assert ourselves and persevere in the situation. We could use that as a training exercise for the boys. If they leave this program after 12 months and go out there and have a setback with their job or life, we train them to endure (and move forward) the hard blows we have experienced. “

Visit bit.ly/DonateATC4S to donate to the ATC’s fundraiser to pay for the two new mowers