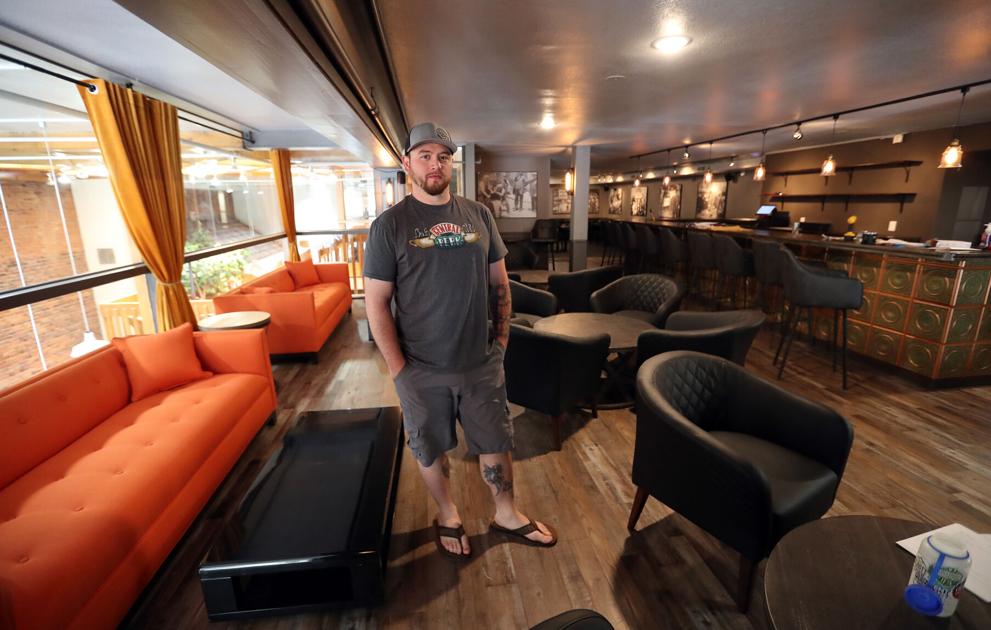 You can find Prohibition-era Moody’s Lounge, a cocktail lounge, and music club at 546 Main St. by looking for the neon orange Dal Segno sign – it looks like a percent sign overlapped by a slanted letter “S” .

If you get a dal segno while playing music, you should circle back and play the section again.

“And that’s exactly what we want people to do when they see us,” said co-founder Logan Moody. “Come back and play with us again.”

Moody’s Lounge has been brewing in the minds of Moody and Jim Simons for years. The two met around the age of 5 when their fathers were in the same band – JT and The Big Dogs. Moody and Simons have reconnected and have been close friends for about 12 years.

Moody has always had a vision for this restaurant. An upscale place that reminds you of Prohibition-era speakeasies in both aesthetic and beverage forms – an old fashioned, a Manhattan – and a comfortable place to listen to live music.

But they kicked the can down the street for a couple of years, waiting for the right time.

“Logan and I always talked about opening a high-end cocktail bar, and we finally made it. It was his vision and I was able to use my experience to help cut the red tape, ”said Simons, who is also Vice President of Sales at Enstrom’s Candies. “Logan’s like a brother to me and it’s great to be able to do this together.”

Then in the winter a square opened on Main Street and apparently on a whim they approached 546 Main.

The lounge is elegant and elegant. They have modern black chairs around small tables to sit and listen to music. If you want more space, you can relax on the orange sofa.

“It sounds selfish, but I wanted to open up a place to hang out,” said Moody. “This won’t be a noisy place with sports and it won’t be a dance club. These companies definitely have their place, but it’s not us. We are something that Grand Junction wants but doesn’t have. “

The endeavor also has an additional meaning between the two friends.

Moody’s Lounge combines their shared experience in the food industry and their love of music. Simons is also a co-owner of Enstrom’s. Meanwhile, Moody has worked in the local restaurant scene for years, often as a bartender, in places like Enzo’s Ristorante Italiano, Kannah Creek, and Ella’s Blues Room.

They also learned music from their fathers. Simons plays the saxophone and Moody, who loves everything from the nu metal band Tool to jazz, is a drummer.

They hope to get JT and the Big Dogs on stage as soon as possible after it opens. Simons and Moody were hoping to get the lounge off to a smooth start this past weekend and are hoping it can open sometime in June.

“It’s a small room so we can’t put a rock band up there. And we won’t have a tool up there either – although I wouldn’t say no if asked, ”said Moody. “It won’t just be a jazz club. We’ll have a lot of chill music there. “

People really want to experience something new, said Simons, and he thinks they can do it.

“This will be a place for anyone looking for a place with good cocktails and good music,” said Moody. “I like to be up there and play with people, but I look forward to serving drinks to everyone. It sounds cheesy, but I love doing it for people. “