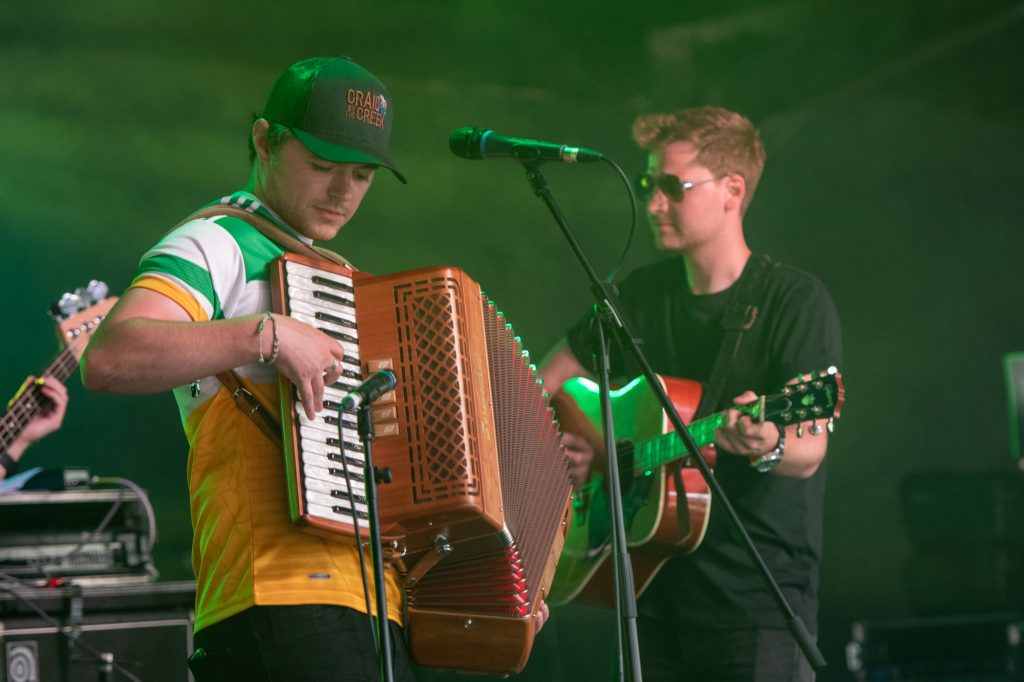 THE Craic by the Creek Festival, recently held in Greater Manchester, attracted some of the top names in Irish and country music.

Originally planned for 2019, the festival was postponed and then postponed due to the Covid-19 pandemic and the associated travel restrictions.

When it became clear that the festival could take place this year, ticket sales soared and quickly sold out.

Such was the demand for a return to Irish live and country music that the organizers realized that the festival would be much more than celebrating live music, but also a party to celebrate the lockdown. 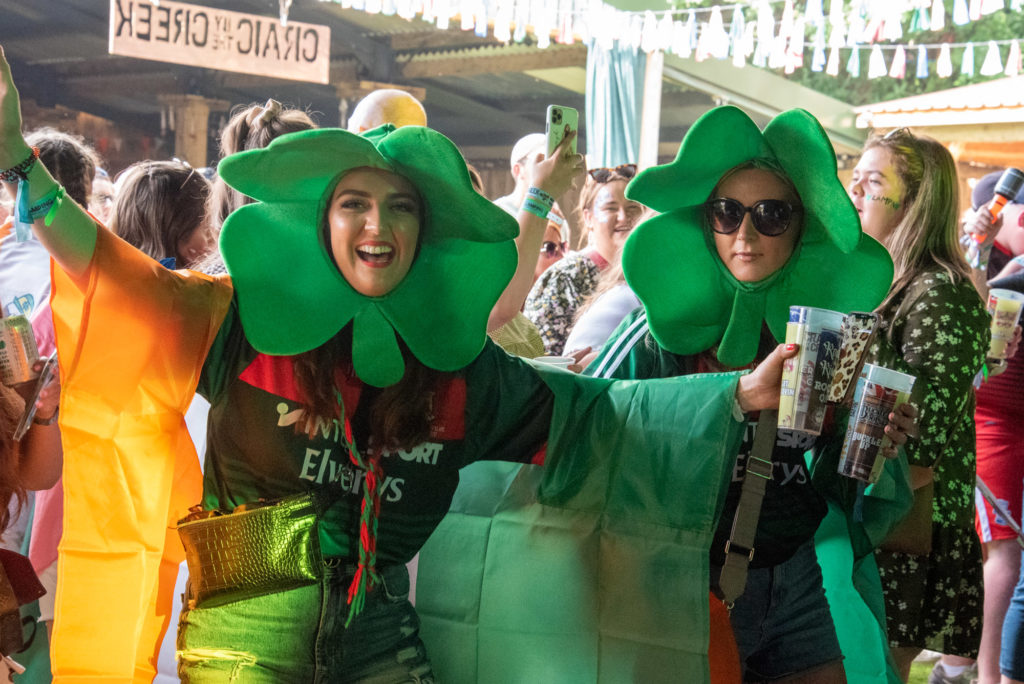 Craic By The Creek audience was in tip top shape (PICTURES: Chris Egan) 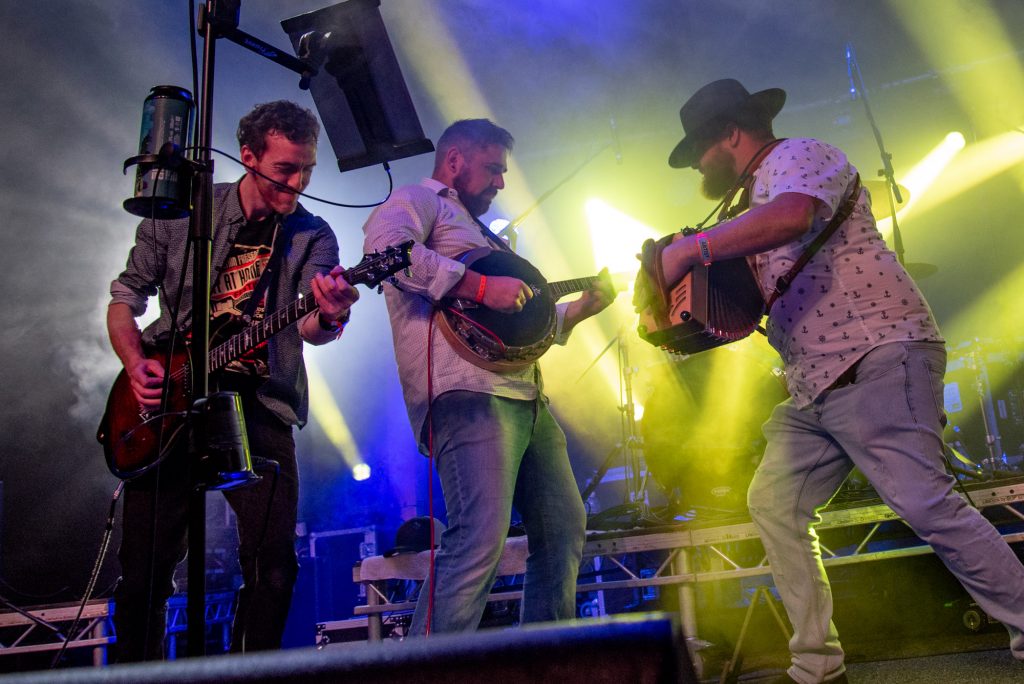 All Folk’d Up in Action (PICTURES: Chris Egan)

Elsewhere in the line-up, Catherine McKenna, Gareth Nugent, Crossroads and Matt and Donal performed on the Bethell Stage, giving festival goers the chance to get up close and personal with the biggest names in traditional and contemporary Irish music. 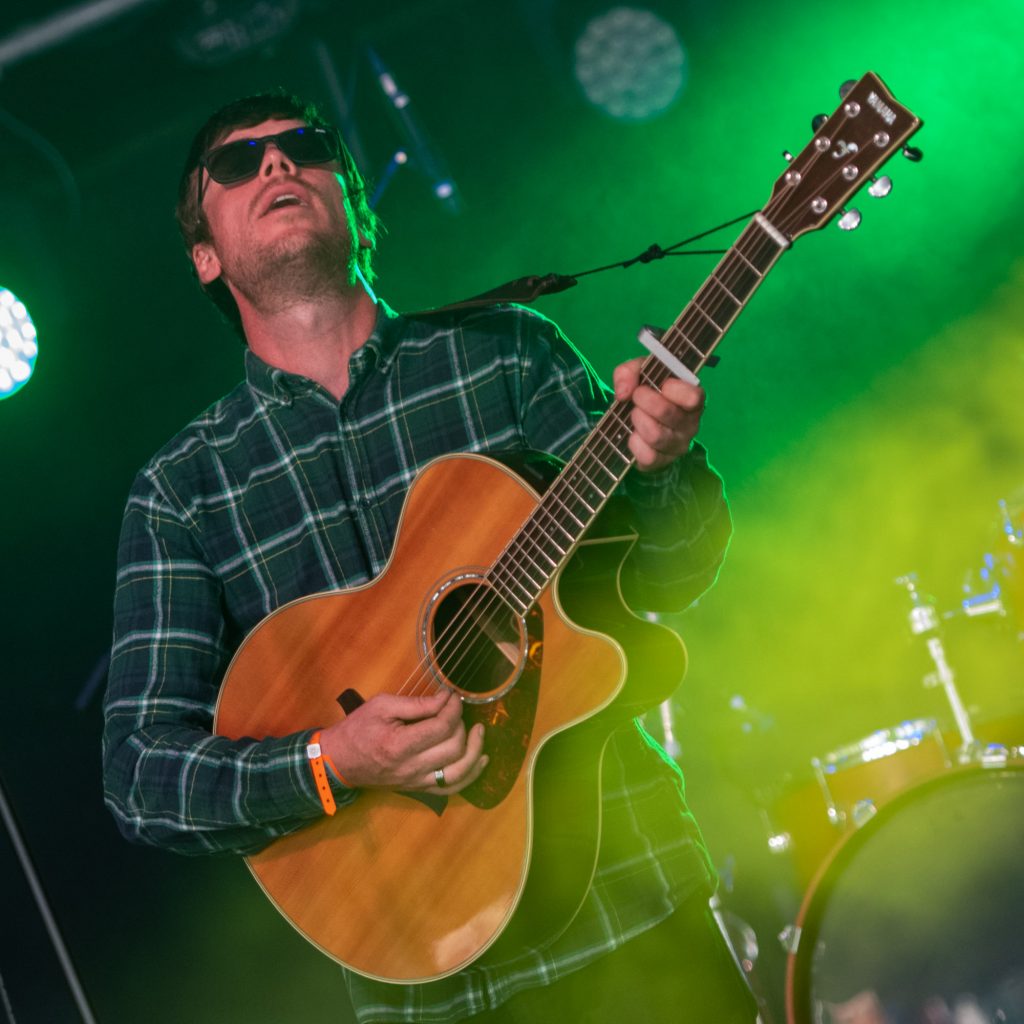 Based on the success of the opening festival Craic by the Creek, the event has already confirmed its dates for 2022. 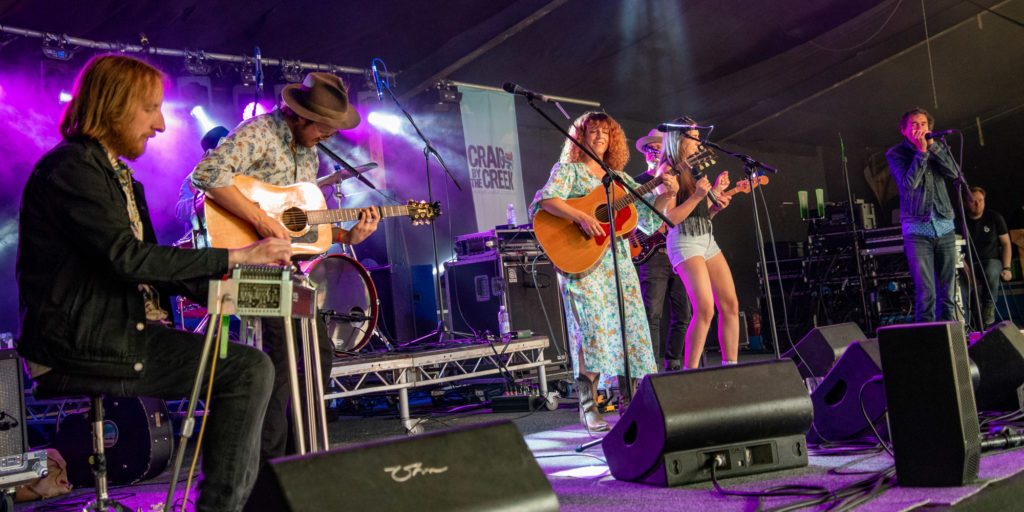 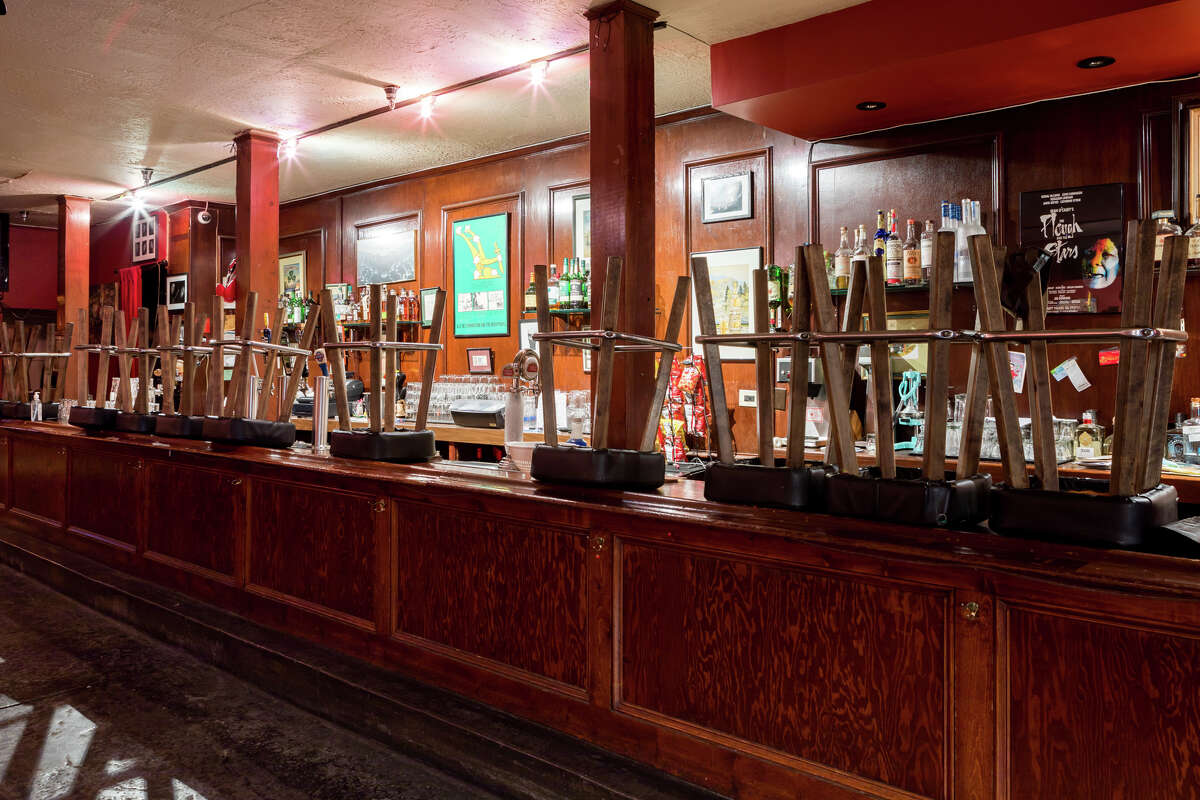 When Irish bar The Plow and the Stars had to close in the first few days of San Francisco’s shelter-in-place order in March 2020, no one could have predicted that the closure would last a year.

Heaney shows me around the bar on a Monday afternoon, just days before St. Patrick’s Day. Chairs and stools are stacked on the dark wooden tables and bar. The elevated stage, where countless musicians have played, is lit and empty, a far cry from the Irish violinists and bluegrass bands that have been the focus of attention over the decades, filling the bar with their music.

“I thought it was only going to be two or three weeks, probably at a very early stage, so I wasn’t really concerned,” Heaney said. “And then, as it went on, it became very obvious [COVID-19 is] not something that would go away – it would be a long way. “

What helped the bar survive was the music scene that the Plow has nurtured over the years. Although the live music stopped, the music continued online: The Bar’s Facebook site has become a who’s who of musicians who have played the bar for the past four decades. Many of them have contributed a short five minute video each of which explains why they love the plow and plays a song to raise money. Heaney proudly shows me the videos and shows musicians from all over the world, from Ireland to Japan, who fondly remember their bar.

When longtime customer and friend Gloria Gregg found the bar was hurting, she helped organize a GoFundMe fundraiser to give the bar some cash flow while the taps stay off. Gregg had been in the bar since 1978 before Heaney took over in 1981 and is one of the many musicians to have played there in the past. She got poetic about nights when the music commanded silence over the bar and remembered playing the dulcimer herself for the crowd.

“When it became clear that COVID would keep the place closed for a long time, [for] Myself and some of my musician friends, it was clear that we had to do something, ”said Gregg. “There was no question about it, because it’s a San Francisco landmark, among other things, but it’s also a place [for] Musicians who don’t make a lot of money but still love to play … Everyone firmly believed the place had to survive and people are ready to do whatever it takes to make sure that happens. “

The GoFundMe has raised about $ 33,000 to date, and the group is hoping to raise a bit more to help raise the bar.

The Plow and the Stars stage has hosted many musicians over the years, many of whom are trying to save the bar.

Although many bars in San Francisco decided to open parklets to cater to the outdoor crowds, as per city and state COVID-19 guidelines, the plow and the stars took a different route. Assuming they could safely accommodate a maximum of 20 people outdoors, the bar went into hibernation last year and shut down services like cables and trash to save money until they could reopen.

And while the prospect of an Irish bar closing for two consecutive St. Patrick’s Day celebrations is a terrible prospect, St. Patrick’s Day is by far the “biggest day of the year,” Heaney said, saying what he and his family were saying its closure was discovered by the larger community advocating reopening. They were luckier than most bars in their situation.

Malone understands the excitement. He’s been working at the bar since he was 21 in 2011, the next generation of the family to run The Plow and the Stars. Even though the bar is closed, Malone has still taken t-shirt and sweatshirt orders and often receives emails about how much the bar means to former customers. A sale was recently made to a couple in Boston, Malone recalled, who said they had told their 13-year-old son stories about their time in San Francisco, which included the plow.

Malone shared stories of patrons who met at the bar and are now married, and of those who have become good friends of the family over the years – he’s even become best friends of people who, over the years, have become through theirs Doors have come. Malone has been hosting a weekly online quiz night every Monday since April, much like the bar every week, and when he was forced to skip two weeks he realized what that social interaction means for all of their customers.

“The plow is almost like a living room,” said Malone. “People gather there, there has always been great music, my father has had great Irish music over the years [and] Musicians came back and wanted to play there … I think it just got really friendly where everyone is made to feel welcome. “

The Plow and Stars sit empty and quiet as it stayed closed for a full year after San Francisco bars closed during the shelter-in-place order in March 2020.

The bar gained its legacy status in San Francisco two years ago, but it also has a soft spot for its Clement Street neighbors. The close-knit neighborhood along this stretch of Richmond has all offered to help in one way or another. Heaney said when they considered building a parklet outside, nearby neighbors offered to work with them to get some food, including the popular Burma superstar nearby.

However, the plow’s long-standing place in the neighborhood has touched more than just the bar guests. Heaney got a rental break thanks to a forgiving landlord who has known him for 40 years. “We saw her children grow up and she saw our children grow up,” he said.

Despite some loans and grants they received during the year, Heaney had to take on some debt during the COVID-19 crisis, he said.

Although the bar will be closed for St. Patrick’s Day, Heaney and Malone are finally seeing a way to reopen. With lovely spring weather on the way and San Francisco hopefully reaching the orange level soon – and eventually the yellow level where bars can reopen indoor capacity to 25% – they are trying again to build an outdoor parklet. with the promise to welcome their friends and customers back.

Heaney knows it will be a while before they can see music back at the Plow, but he’s planning a comeback in the coming month or so if things continue to move in a positive direction.

“I myself feel right now that there is light at the end of the tunnel,” said Heaney as we stood in the empty bar. “I feel like the more people are vaccinated, the greater the chances we have.”

Everyone wants to feel the happiness of the Irish and there is no better place to experience it than Dublin. The capital of Ireland has a rich history as a 9th century Viking settlement and home to St. Patrick’s Cathedral. It also has one of the largest St. Patrick’s Day celebrations in the world with a massive six day festival filled with music, dance and a deep appreciation for Irish culture. While this year’s festival is taking place virtually, there is still a lot to experience in this happy country.

The first thing you want to decide before heading to Dublin is where you will be staying. The historic Merchant Hotel was restored in 2005 to retain the 18th century suites named after Irish writers WB Yeats, Oscar Wilde, James Joyce and Bram Stoker. The Dean has 52 rooms in six different styles, from modern to cozy. The rooftop bar has some of the best views in town. The Spencer Hotel has a relaxing spa, sauna and steam room to help you relax. The Clayton Hotel offers the convenience and convenience of being in the city center. But if luxury is what you’re looking for, The Merrion is for you. Combining some of the most impressive Georgian architecture with Ireland’s largest private collection of 19th and 20th century art, this five star hotel makes this beauty one of the city’s finest wonders.

What should I do

Once you are settled in, there is no shortage of fun things to do. Start with a visit to Trinity College and check out the extensive library with 200,000 books or stroll through the National Botanic Gardens and experience the exotic and colorful flowers. The Dublin Zoo is one of the most popular attractions in Phoenix Park with more than 400 animals. If the Lions look a little familiar, it’s because their ancestor Leo was used in MGM’s movie logos in the early 1960s. Learn how to play skilled Irish sports like hurling and handball at Experience Gaelic Games, and Wild Rover Tours takes you to all of the locations where HBO’s Game of Thrones was filmed. And no trip to Dublin is complete without a stiff taste of real Irish liquor, which you can sample at the Guinness Storehouse Factory, Jameson Distillery and the Irish Whiskey Museum.

Where shall we eat

When it comes to pub food, Dublin is king and the options are endless in the city center dining scene. You can have hearty full Irish breakfasts at a variety of places including The Bakehouse, O’Neill’s and The Hairy Lemon and you won’t be judged for having a big pint of Guinness early in the morning. Leo Burdock has served his famous fish ‘n’ chips since 1913 and even has a famous wall dedicated to celebrities who dined there. Delahunt has its own twist on boxty potato pancakes, and fast-paced eateries like Bunsen and Bobo’s offer flavourful organic Irish beef burgers. But one of the most popular dishes is the beef stew, and few places are as satisfying as the Church Cafe on Mary Street. The slow-cooked lamb with root vegetables and baby potatoes will make you fall in love with a bite.

There are several photogenic sights to discover in Dublin that are not to be missed before you leave. Built in 1816, Ha’Penny Bridge is one of Dublin’s oldest historic sites and glows in a colorful display at night. The National Leprechaun Museum is entirely dedicated to Irish folklore and mythology, while the Little Museum of Dublin houses 5,000 exhibits on three floors for 20th century events. The historic Dublin Castle offers an even deeper look back at the 13th century, and the tower has an impressive exhibition at 120 meters high. Escape the hustle and bustle by taking a breather by the pond in St. Stephen’s Green Park. Nothing says Ireland like green spaces.