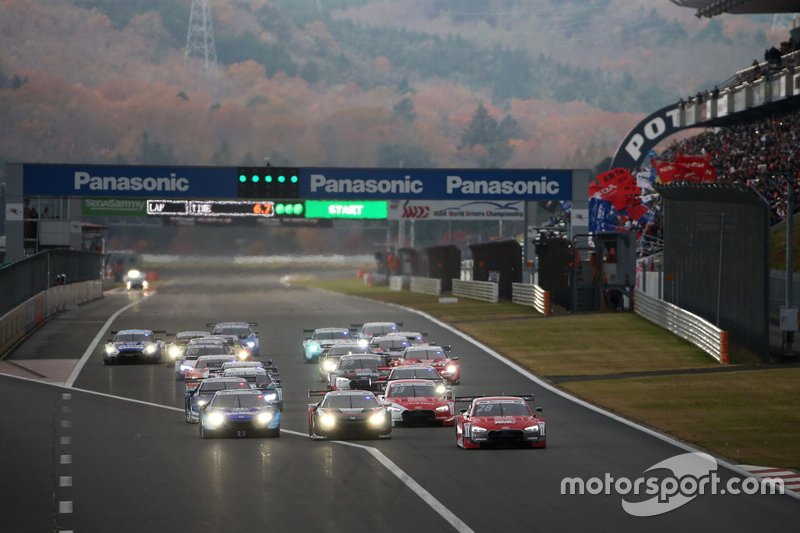 For a long time, the more traditional rolling start method was used in the Japanese championship. The cars did two warm-up laps before waiting for the lights in the pit lane to turn green.

However, serial promoter GTA tested the Indy launch with two files on both days of the official testing at Fuji Speedway in late March, leading to suggestions that this could eventually be introduced into the championship.

Indy-style starts were also unveiled at the same location in 2019 at the SUPER GT x DTM Dream Race, and the German championship has been using the same procedure for their restart since 2017.

Real Racing driver Baguette doesn’t think Indy-style starts are suitable for an endurance series like SUPER GT, however, as the risk of starting line accidents is just too high.

“I don’t think that’s going to change that much,” Baguette told Motorsport.com when asked for his opinion after the second Indy-style start attempt in which he was third in the dummy in the No. 17 Honda NSX-GT -Starting field was.

“We’re just a little closer together at the beginning, but once the green lights come on we’re still kind of separated.

“I think it’s very difficult to do the same thing as in the DTM, where they’re all really together. We only have eight races a season and it’s endurance racing.

“In the DTM it’s sprint races and there are more races [per season]so they can take more risks. We can’t afford to crash at the beginning, so it’s difficult to have the same system.

“The race format is completely different. It’s not that you want to take all of the risk in the beginning. Maybe it’s more like that in the DTM because it’s difficult to overtake and the races are short. “

Race starts and restart formats were one of the main differences in sporting regulations between the DTM and the SUPER GT during their short-lived Class One merger.

After safety car periods, the DTM switched to the Indy procedure for restarting in 2017, which proved to be a success with the fans, but continued to rely on standing starts at the beginning of the races.

However, as part of the switch to GT3 machines, the series will be halted this year as a whole.