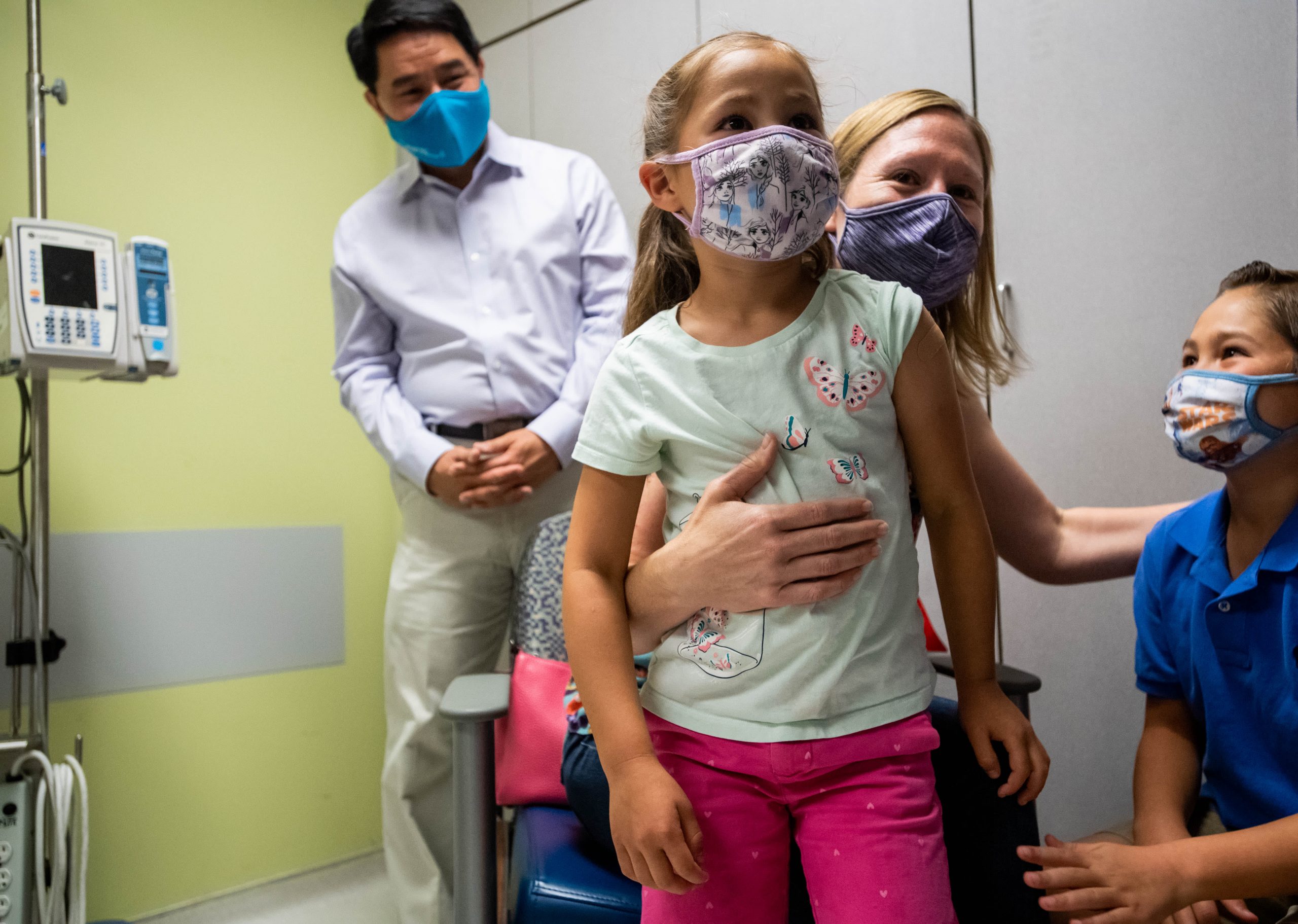 With husband Stephen by her side, Erin Shih hugs her children Avery 6 and Aidan 11 after receiving their second Moderna COVID-19 vaccines at Kaiser Permanente Los Angeles Medical Center on Friday, June 25, 2021.

Modern said Monday that in a study of children ages 6-11, a smaller dose of its Covid-19 vaccine is safe and produces a strong immune response.

Two 50-microgram doses of the vaccine, half the dose given in adults, resulted in antibody levels 1.5 times higher than in young adults, the company said in a press release, citing early data from a phase 2 / 3 study.

The syringes were generally well tolerated even in young children, according to the company, with the most common side effects being fatigue, headache, fever, and pain at the injection site. The vaccine has been tested on more than 4,700 children.

Moderna plans to submit the data to the Food and Drug Administration, the European Medicines Agency and other health authorities “in the near future”.

“We look forward to filing with regulators worldwide and remain committed to doing our part in ending the COVID-19 pandemic with a vaccine for adults and children of all ages,” said Stephane Bancel, CEO of Moderna, in a statement.

The new data comes the day before an important FDA advisory committee meeting to discuss whether to make a recommendation Pfizer and BioNTech‘s vaccine for children ages 5 to 11. The FDA could approve the vaccinations within days of the meeting, and the Centers for Disease Control and Prevention could approve them as soon as next week.

Many parents say they are careful to get their children vaccinated as the kids are entering the new school year and the Delta variant is still spilling across America. The number of new Covid cases in children remains exceptionally high with more than 1.1 million new child cases in the past six weeks, according to the American Academy of Pediatrics.

Deep in the heart of Texas there is a trifecta of problems: Governor Greg Abbott, the Texas Legislature, and the Texas Board of Education. Last week they teamed up to launch a series of conservative initiatives that could soon result in a community near you. My concern is that these initiatives are seeded with a mark of xenophobia and racism that is spreading across the country.

This is a cautionary story because what happens in Texas doesn’t stay in Texas. I wrote about this over a decade ago, when the state used its enormous purchasing power (it has about five million school children) to influence how the nation’s history books would be written. At the time, the Texas School Board did not consult historians, sociologists, or economists before creating more than 100 additions to the social studies curriculum.

It unilaterally decided to focus more on the military, Christian values, modern Republican incumbents, and American corporations (with the word “capitalism” banned). In particular, the contributions by George Wallace, Lester Maddox and Phyllis Schlafly were highlighted. Texas could do this because it bought more social studies books than any other state, and the editors of those books were willing to consider alternative facts.

In January, the New York Times analyzed the most widely used textbooks in Texas and California, the most populous state. Dana Goldstein reported that while books on social sciences generally deal with the same story, the content “diverges in a way that reflects the deepest partisan divisions in the nation.” She said there are hundreds of differences between the Texas version of the textbooks and the California version, some subtle, others “extensive.” That’s crazy.

Last week, Texas lawmakers passed the most restrictive anti-electoral law in the country making abortions illegal every time a heartbeat is detected, which could be just six weeks after conception before most women know they are pregnant .

But Texans Will Be Texans: Paxton Smith, 18, surprised an audience of family and friends when she started out at Lake Highlands High School in Dallas when she was passionate about advocating a woman’s right to have an abortion. Her talk went viral after she gave up her “verified” closing speech and said what she really wanted to say.

Last week, Texas also targeted “critical racial theory,” the concept that racism is systemic and not just a collection of individual biases. Critical Racial Theory as I read it challenges educators to show students how racism in America has affected education, law, and entertainment – every facet of our national life, in fact.

The concept has sparked cultural wildfire. People react – don’t think, don’t listen, just get hot words like “reparation” out of the air. Part of the problem is the actual language of the initiative. Critical race theory is not an easily accessible term. But it suggests finding common ground and creating equality of opportunity and acceptance where there was bias. It suggests that it is not enough to correct the historical errors; the injustice must be recognized.

Last week, Florida Governor Ron DeSantis called for the state education agency to end this race initiative. “If we have to play Whack-a-Mole all over this state to stop this critical racial theory, we will,” he said.

I see this as an educational moment for those of us who are not fully aware of the toxic effects of racism that manifested itself in our lifetime. I don’t think I fully understand critical racial theory, but I do understand that it will shed light on some dark corners of American history.

America’s history is riddled with racial prejudice. Is anyone seriously asking that if we all moved in together, we would move forward more effectively? Does Texas really think it can suppress its non-white majority in the upcoming election?

Activism starts with the school board. Whether or not Texas-style conservatism is leading our way, whether or not our local districts incorporate critical racial theory into their curriculum, service in a school board keeps us updated and provides a platform for our views.

South Africa faced apartheid. Germany recognized the Holocaust. We Americans have a tragic history of racism that began with slavery and never ended. We cannot be afraid to look at our own past.

I recently came across a photo from the 1940s of a young boy, 8 or 9 years old, drinking from a “colored” fountain in North Carolina. This is the definition of systemic racism and evidence that racial prejudice and the American legal system are intertwined during our ongoing struggle for equality in the United States.

Copyright 2021 Randi Kreiss. Randi can be reached at randik3@aol.com. 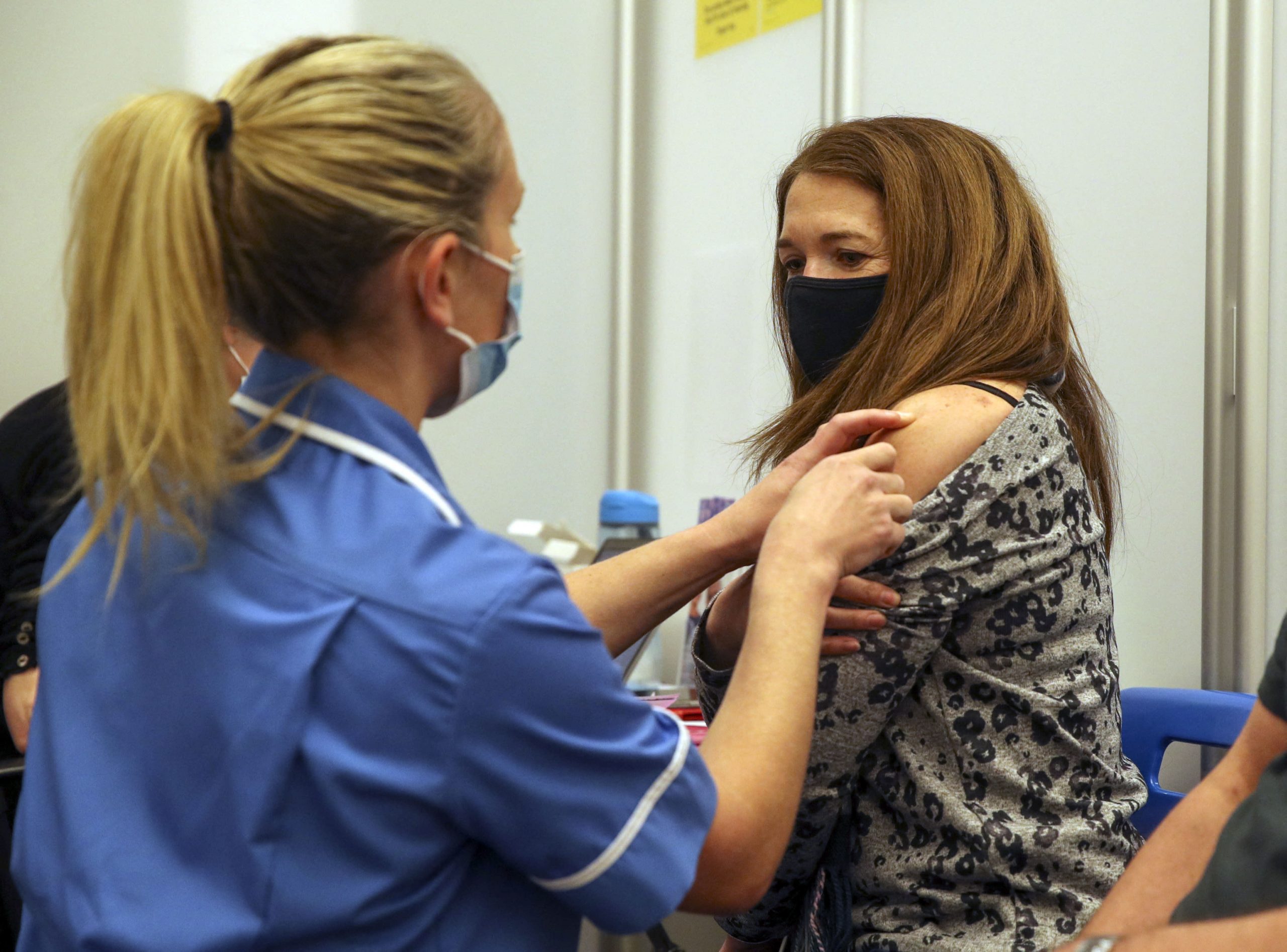 Caroline Nicolls will receive an injection of the Moderna Covid-19 vaccine administered by Nurse Amy Nash at Madejski Stadium in Reading, west of London, on April 13, 2021.

LONDON – Oxford University researchers announced the start of a Human Challenge study on Monday to better understand what happens when people who have already contracted the coronavirus become infected for the second time.

The researchers will investigate what kind of immune response can prevent people from becoming infected with Covid-19 again and examine how the immune system reacts to the virus a second time.

Little is currently known about what happens to people who had the virus the second time they were infected.

In medical research, Human Challenge studies are controlled studies in which participants are intentionally exposed to a pathogen or beetle to study the effects.

“Challenge studies tell us things that other studies cannot because, unlike natural infections, they are tightly controlled,” said Helen McShane, chief investigator for the study and professor of vaccinology in the Department of Pediatrics at Oxford University.

“If we re-infect these participants, we will know exactly how their immune systems responded to the first COVID infection, when exactly the second infection occurs, and how much virus they have,” said McShane.

It is hoped that the study will help improve scientists’ basic understanding of the virus and develop tests that can reliably predict whether people will be protected.

What happens in each phase?

In the first phase, up to 64 volunteers between the ages of 18 and 30 who were previously infected naturally will be re-exposed to the virus under controlled conditions.

Researchers will oversee attendees’ care while they perform CT scans of the lungs and MRI scans of the heart while isolating in a specially designed suite for at least 17 days.

All participants must be fit, healthy and have fully recovered from their initial infection with Covid to minimize the risk.

Study participants will only be released from the quarantine unit if they are no longer infected and there is a risk of the disease spreading.

A view of the City of London on a clear day.

In the second phase of the experiment, two different areas are examined.

“First we will very carefully define the basic immune response of the volunteers before we infect them. We will then infect them with the dose of virus selected from the first study and measure how much virus we can detect after infection. We will then.” to be able to understand what kind of immune responses protect against re-infection, “said McShane.

The entire study period is 12 months, including at least eight follow-up appointments after discharge.

“This study has the potential to change our understanding by providing high-quality data on how our immune systems react to a second infection with this virus,” said Shobana Balasingam, senior research advisor on vaccines at Wellcome, a nonprofit that funded the study.

“The results could have important implications for the future management of COVID-19, influencing not only vaccine development but research into the range of effective treatments that are also badly needed,” Balasingam said.