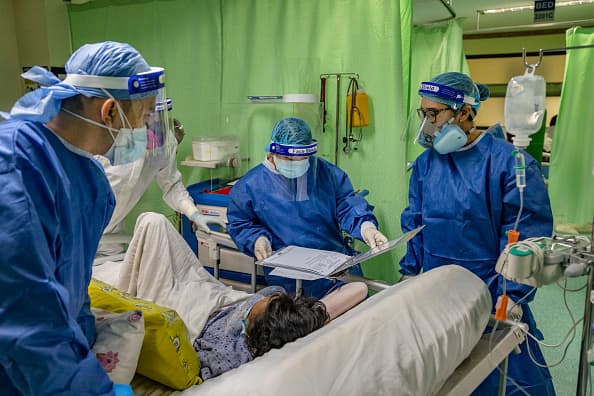 Medics in a pneumonia ward in the Philippines.

LONDON – Mass vaccination campaigns are being carried out in the developed world, but many countries are still grappling with spikes in coronavirus infections and new strains, such as the highly infectious Delta variant.

And now health experts are warning the public that a very difficult flu season could also be ahead.

“There is great uncertainty about the 2021-2022 flu season,” epidemiologist Lauren Ancel Meyers, director of the University of Texas’ Covid-19 modeling consortium, told CNBC.

“As with Covid, when someone recovers from a seasonal flu infection, they retain a certain level of immunity, at least for a short time, which protects them from future infections. Since our covid containment measures prevented the flu from spreading over the past year, there aren’t “a whole lot of people who recently got infected,” she said.

“So we can enter the flu season with a higher vulnerability than usual, which could exacerbate the risks,” she added.

Meyers believes that whether the flu season is more severe this year or not could depend on how the virus evolves as well as decisions on a personal level.

“As we have learned from the past 18 months of the Covid-19 pandemic, the choices we make as individuals and communities can have a huge impact on the fate of an outbreak. We can and should do our part to prevent a disastrous flu season “by getting vaccinated early this fall and taking sensible precautions if and when the virus spreads widespread,” she said.

“Our experience with Covid can lead to behavior changes that work in our favor. People may be more willing to take flu vaccines and wear face masks or take other precautions to prevent transmission during high season.”

“I think we have to be aware and adjust to the fact that the coming winter can be a difficult one,” he said.

Flu numbers from the US and England show that influenza cases have decreased during the pandemic, largely due to the social distancing measures in place, which are helping to stop the transmission. During the 2019-2020 flu season, the US has Centers for Disease Control and Prevention predicts that influenza and pneumonia (a life-threatening flu complication that often affects the elderly) will be linked to 38 million illnesses, 405,000 hospital admissions and 22,000 deaths. The CDC stressed that the numbers are only estimates.

But regarding the 2020-2021 season, the CDC told CNBC that due to the low level of influenza activity last winter, there wasn’t enough flu or flu-related hospitalizations in the United States to use a model to estimate US flu exposure for 2020- 2021. “

“We can say that the low level of flu activity during the 2020-2021 season has contributed to dramatically fewer flu cases, hospital admissions and deaths compared to previous flu seasons,” Lynnette Brammer, team leader of the CDC’s domestic influenza surveillance team, told CNBC on Tuesday.

Whitty’s comments were taken up by Neil Ferguson, an epidemiologist at Imperial College London who has also advised the UK government on its Covid strategy.

He agreed that “seasonal influenza is likely to be a major problem” when it comes fall and winter.

“All the measures we have taken against Covid around the world have brought the flu to a very low level and basically no one got the flu in the last year, so the immunity has dropped a little … I think we have to go to one Be prepared for potentially quite significant flu. “Epidemic later this year,” he told the BBC show “Today” in late June.

It’s hard to predict what will happen during the 2021-22 flu season, said CDC’s Brammer, but the CDC is “preparing for flu virus circulation to return to pre-pandemic levels” as some respiratory viruses are already circulating again Pre-pandemic stages.

“We think something similar could happen with the flu, especially as community efforts to contain it continue to relax. , which also circulated at a low level in the 2020-2021 season, is increasing. This increase is outside of the typical season, “she noted.

“We know that the flu shot is still the best way to protect yourself and your loved ones from the flu and its potentially serious complications,” added Brammer.