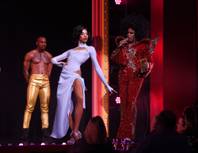 Kelly Clarkson will perform at the Mandalay Bay Events Center in Las Vegas on Saturday, August 15, 2015.

Since the past 12 months have likely felt like an eternity, it can be difficult to remember what went on just a year ago. On March 1, 2020, officials in Washington state confirmed that a man in his seventies became the second death from COVID-19 in the United States. The national toll would rise to six the next day. Nevada state officials would not confirm their first case of the virus for another four days.

The Las Vegas Strip was infamously closed by government orders on March 18 after the NBA and NHL suspended their schedules, postponed or canceled many local conventions and entertainment events, and closed Wynn Resorts, MGM Resorts and Cosmopolitan their Las Vegas Casino Resorts. A year later, this unprecedented action still seems shocking.

Before it all happened, the Las Vegas tourism and entertainment machine was moving fast, looking forward to an exciting spring season and blockbuster year highlighted by the Raiders and NFL debut at the new Allegiant Stadium. Before professional football took over the city, the new venue was christened by a concert by country superstar Garth Brooks. In just a few weeks, March 13th will mark the one-year anniversary of the day on which Brooks sold out the 65,000-seat stadium in just 75 minutes. This concert has been postponed for this summer on July 10th.

A year ago there were many other minor developments that took the Vegas entertainment scene forward. Cirque du Soleil’s “O”, one of the most successful shows in the history of the Strip, had just set a nightly schedule for the first time in 21 years, selling more tickets than ever before. Also in Bellagio, the Mayfair Supper Club caused a stir as an eclectic new nightlife scene, and across the street from the Flamingo, the energetic “RuPaul’s Drag Race Live” became a hot ticket.

New headline music residences were due to open in April by Kelly Clarkson at Planet Hollywood’s Zappos Theater and in May by Sting at the Colosseum at Caesars Palace. The Jonas Brothers embarked on a grand tour with a limited engagement of nine shows at Park MGM’s Park Theater in April.

Technology-inspired new production shows should debut on the Strip in Spring 2020. “ILuminate Presents: Happy Hour” was due to arrive at the Sin City Theater on Planet Hollywood in late March, combining dance with interactive technology and people talked about “An Evening With Whitney: The Whitney Houston Hologram Concert”, which took place in April in the same Flamingo showroom to be opened with “Drag Race”.

Twelve long months ago, 2020 turned out to be one of the most varied and compelling years of Vegas entertainment in quite a while. Today we are where we are, but there are many reasons to be optimistic about the scene. There are currently around two dozen shows and comedy clubs on or around the strip, and almost all of the productions that originally resumed in the fall when government mandates allowed it to do so are now on the stage or have announced plans for one Rise in winter infections returning rates caused tighter restrictions and smaller audience caps.

One of the most significant shows still awaiting return is the Jabbawockeez dance and music spectacle at the MGM Grand, which ironically debuted a new version of the show called “Timeless” in early March last year before it closed. The Jabbawockeez came back in November and moved the show to the huge Grand Garden Arena to appeal to a socially distant audience. However, they closed again in the winter and have not yet announced any plans for another comeback.

On March 15, COVID restrictions are expected to change again, allowing gatherings and events with 250 people or 50% of the event capacity. That adaptation will bring the return of “Absinthe” at Caesars Palace on March 17, “MJ Live” at the Strat and Terry Fator in New York-New York on March 18, and David Copperfield at the MGM Grand on March 21, The Published Revue “Magic Mike Live” in the Sahara is currently planned for March 26th. Shows like “V – The Ultimate Variety Show” and “All Shook Up” could return to the V Theater in the Miracle Mile Shops in mid-March as well.

And there’s still nothing more exciting in Las Vegas than the opening of a brand new casino resort, due to take place on March 25th when Virgin Hotels Las Vegas finally arrives east of the Strip, a complete redesign of the former Hard Rock Hotel estate.

Wait, check this out. What could be more exciting than Vegas Golden Knights fans returning to the fort to see their team play for the first time since March 3, 2020? That’ll happen tonight when the Minnesota Knights host at the T-Mobile Arena. It won’t be the crowded house fans remembering the time before the pandemic, but it could be the brightest light at the end of this tunnel that has ever been.