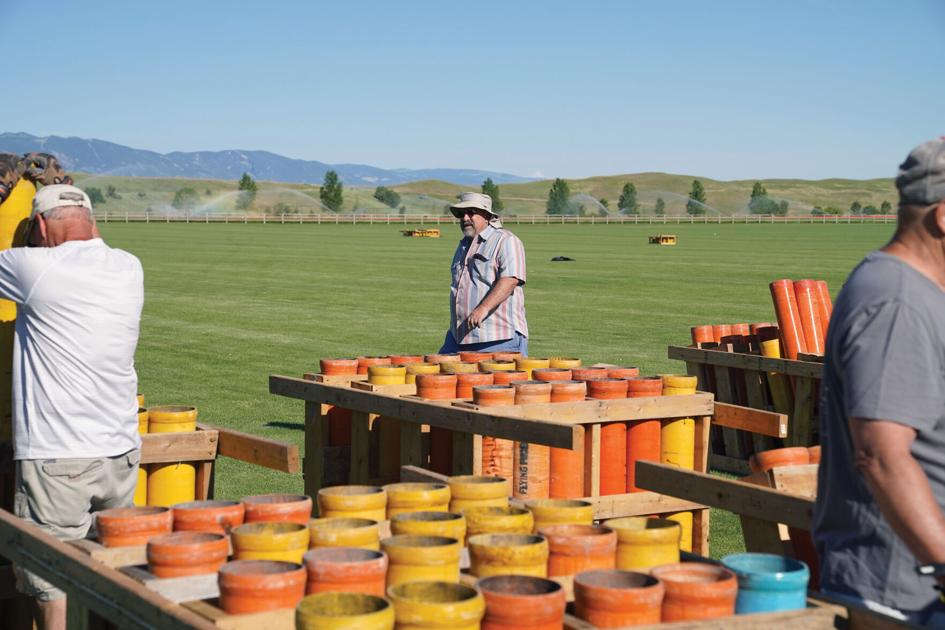 The African American cultural center on the coast has planned a colorful season full of thought-provoking programs and two fascinating exhibits, and it starts with a real sucker.

“Fashion Forward: Africana Style: Connection of African fashion through time and place” is published SAACCIt’s season with all wearable things, in picture and artifact.

The exhibition occupies all three floors of the center, with each level highlighting a different theme, said SAACC President Sandi Clark Kaddy. And she adds, it’s unlikely to be what people expect.

“When people look at African fashion, they often think of dashiki, a piece of clothing worn in West Africa that covers the upper half of the body,” she says. “It’s different. And it’s really fabulous.”

On the ground floor is the centerpiece of the exhibition, “Sapeurs: Ladies and Gentlemen of the Congo”, with photographs by the award-winning London photographer Tariq Zaidi.

Zaidi’s pictures documented the Sapeurs, a fashion subculture in an impoverished community in Brazzaville, Republic of the Congo. The sapeurs, also known as members of the Societe des Ambianceurs et des Personnes Elegantes (the society of taste makers and elegant people), are made up of workers who turn into fashion dandies of an earlier age at night.

Learn more:History Matters: Yes, Virginia, there was slavery in Portsmouth too

After a day at work, these stylists go home, change and then wander through the streets in creative, elegant and often colorful clothes, a mixture of newly purchased, used or self-designed and made from fabric or offshoots.

“‘Sapeurs’ is the jewel of the show,” says Clark Kaddy. “The photography is amazing … the outfits are so creative, just wonderful.”

Clark Kaddy was referred to Zaidi’s work by a board member familiar with his job. She tracked down the artist in a museum where his work was exhibited.

“It worked out just fine,” she says. “It’s just one of those times when you thank God for the internet.”

Zaidi’s oeuvre contains numerous series. But it was his sapeurs who “blew me away,” she says. “I looked at his pictures and said, ‘Oh, we have to tell this story.'”

More:Vernis Jackson was named Granite Stater of the Month in February

The images of the photos go beyond images of fashion costumes. You speak of the earlier French colonialism, an era from which the “elegant people” originated strongly and which it made its own. More importantly, they deal with the humanity of the fashionistas.

“Tariq focuses on issues of inequality, tradition and vulnerable communities around the world,” she says. “(Sapeurs) use fashion to brave their circumstances … If you look at the photos of these brilliant outfits, you can see that the environment is one of poverty.”

“He captures the dignity of these people in his pictures, the strength and soul of the people around them. That is his passion.”

Images from the show arrived electronically and were donated by Green Acre, a Baháʼí school center for learning, Eliot, Maine.

“You have to know the story behind these pictures. These people work like us. They could be cops, housewives, school kids, and they run home and put on their outfits. … They walk the streets like celebrities and they become.” treated like celebrities. “

Favorites from the collection show the child Sapeurs.

“Remember, they use fashion to brave their circumstances,” she says. “So, the ones that really resonate with me are the ones with the kids wearing their outfits; they’re so proud.”

“Contemporary African Fashion” (CAF) is installed on the upper floor. As the title suggests, this is the fashion of the day with some “incredible quilts”.

“Everything here is authentic and actually used,” she says. “Every piece tells a story.”

Ghanaians traditionally print pictures of the deceased on fabric and then make clothes that are worn in honor of loved ones.

“The items are made for the family, a skirt, a top, a shirt, an armband, a handbag, whatever you want,” she says. “The pieces we have are from private collections … and belong to Dzifa Patterson and Akua Zika Daisy Houdegbe, both Seacoast folks.”

“CAF” includes homemade objects and pieces by African designers, including clothing by Monica Ami Gligah from West Africa, residing in the USA, and quilts by Kathleen Otoo from Ghana, also in the USA, made with scraps of fabric.

The Gustin Collection is located in the basement. These items are part of the SAACC collection, brought together by Harold and Mabel Gustin and donated by Andrew Slusarski of Maine.

“It’s vintage African fashion from Liberia with influences from Islam and African American expats,” she says. “There is fashion, jewelry and accessories … purses, alligator skin shoes … fans (and) we were also lucky enough to receive a quilt made of sheep, otter and leopard skin, which we will exhibit.”

SAACC’s second exhibition is “We the People: The Fight for Justice, People of Color in White Suburbs,” curated by Joanne Kelly (from Portsmouth’s Cup of Joe).

Kelly, who organized Portsmouth’s Black Lives Matter Rally, suggested the idea, Clark Kaddy said. “She showed me some amazing photos,” she says. “So I told her to run with it!”

“We the People” presents around 50 pieces, including photos, art and videos, which are exhibited and staged on the three floors.

“There are photos that were taken last year and show the Justice and Unity Movement from across New Hampshire,” says Clark Kaddy. “They are from ordinary people, with some professionals, people who might have been to a rally and took an incredible picture of unity, in the union’s whitest state.”

SAACC also has numerous programs in the works for 2021. Some issues and dates have been confirmed, others are pending.

“It all depends on COVID how open things can be,” says Clark Kaddy. “COVID determines certain data.”

The “Color Filled Conversations” series is returning after starting in 2020.

“Our goal is to do four to six a year,” she said. “They can only be live-streams, although it is possible to make arrangements to host both in-person and live-streamed events. But virtually or physically we will have them.”

One thing is certain: “Black Lady Poetry”, a two-day event with presentation and workshop (May 28 and 31).

Others on the series are: “Black Dancers”; “Mitreden”, a look at the Delany sisters, who lived for over 100 years; “Black Leadership In Higher Education” and two other TBA topics.

It’s been a great year made possible by the work of many, including Vernis Jackson, Kelvin Edwards, the board of directors and volunteers, “and all the newbies,” says Clark Kaddy. “It takes a village.”

“I feel great this year. I feel inspired by the things we plan, the things we do, the message we send,” says Clark Kaddy. “I am very positive about the direction we are going and I am proud of the organization. I am very proud to be involved.”

What: “Fashion Forward: Africana Style: Connection of African fashion through time and place”

When: Until September 1st

What’s next: “We the People” exhibition from September 1st to December 23rd