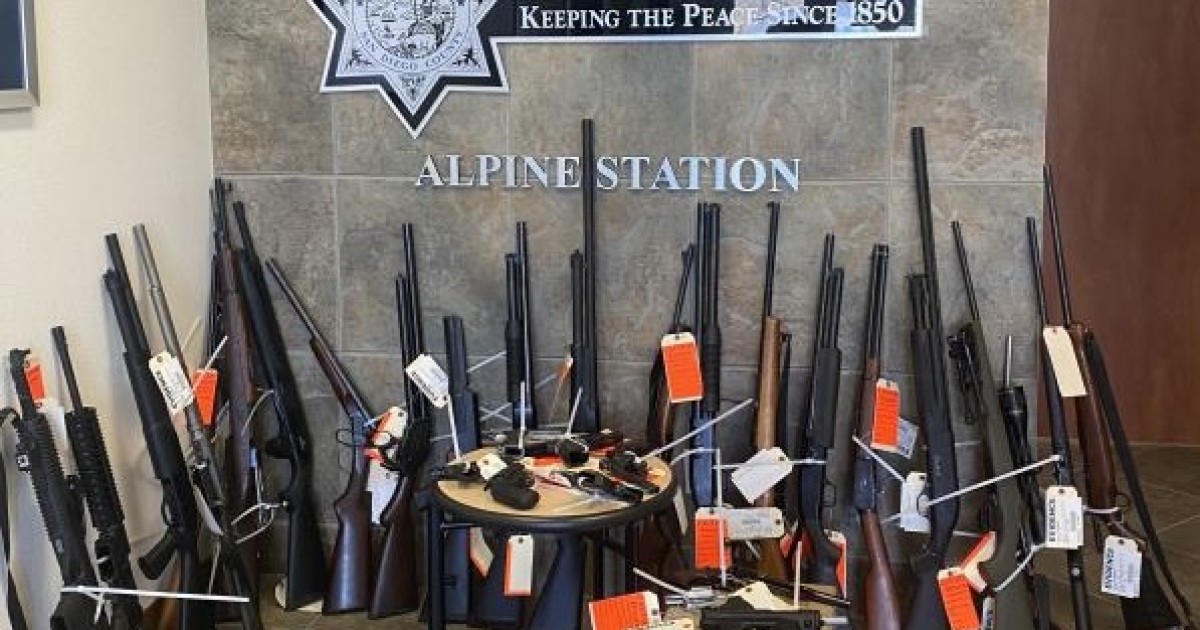 Abrams is a board member of Team ENOUGH, Brady’s gun violence prevention initiative, and a 2021 graduate of Del Norte High School. He is a resident of 4S Ranch.

In April, President Joe Biden did described our country’s gun violence epidemic as “an international embarrassment” and promises to address this crisis.

President Biden was right and he was quick to act – but here in California, our elected officials have long led the nation to find sensible and comprehensive solutions that save lives despite ongoing attacks from the gun lobby and industry. Lawsuits such as those recently attempting to lift California’s decade-long bans on assault-style firearms or the one aimed at lifting our reasonable demand that ammunition purchases be subject to background screening threaten this advancement and public safety.

The disturbing decision by a federal judge last month to lift the offensive weapons ban, which the appeals court later suspended, shows how concerted and dangerous these efforts are. Simply put, this federal judge was wrong. The state’s ban on assault weapons has helped keep Californians safe for over 30 years. It’s constitutional and it’s common sense.

It’s not just numbers – lives are saved and communities are spared persistent fear and violence.

That is not to say that our state is without arms. It is precisely for this reason that I am a youth gun violence prevention activist. I’ve seen gun violence in my community here in San Diego. I lost friends to gun violence.

We still have more work to do.

We also know that California, like the rest of the nation, is one top gun violence and homicides last year, which will continue into this year.

It is precisely for this reason that our elected representatives cannot cease to create strong, sensible, and comprehensive laws and guidelines to ensure our safety.

Earlier this year, Governor Gavin Newsom called for $ 200 million in dedicated funding for CalVIP in his California comeback plan, nearly quadrupling the existing grant program funding. CalVIP funds evidence-based community and hospital-based violence intervention programs that have been shown to help stop violence and heal communities to prevent trauma. It’s an investment in our communities that has only positive, downstream effects. This kind of courageous leadership is why officials in states like New York, as well as President Biden, have similarly called for investment in community violence intervention programs.

Similarly, our state legislature has passed state-of-the-art directives such as a requirement that newly introduced semi-automatic pistols contain microstamping technology, the first such requirement in the country, and a ban on the sale of ghost weapons. These laws are being investigated and emulated in other states as well as in our federal government. California is leading once again.

Our leaders cannot give up on these efforts, and fortunately they have not. Governor Newsom and Attorney General Bonta have remained steadfast in their defense of our state’s ban on offensive weapons, while advocating the policies and programs our state needs to further reduce gun violence and protect our communities.

I have no doubt that they will prevail in court in our state in defending the ban on offensive weapons. I also know that they will continue to put the interests and safety of Californians first as they work to establish even broader gun violence prevention guidelines. Young people in California lead the way, asking for and supporting life-saving bills. In San Diego, I look forward to our city’s leaders responding to these changes and addressing issues such as the proliferation of ghost weapons head on.

While President Biden is right that our gun violence epidemic is an international embarrassment, the country can rest assured that California is helping to correct this injustice, and we will not let up.

Conservatives are awakening to a disturbing new reality: we are now being outperformed by a stream of campaign money from liberal donors living in deep blue states. Overall, the Democrats outperformed the Republicans in the 2020 federal races by a massive $ 8.4 billion to $ 5.3 billion, reversing the trends of recent presidential cycles. In the shell game for secret money Joe Biden outdid Donald Trump by six to one. And for the first time in recent years, business interests – from Wall Street to the healthcare industry and beyond –now spend more on Democrats than Republicans.

As a former Republican Senator and freedom-conscious Conservative in New Hampshire, I have long been fundamentally concerned about the corrosive effects of unlimited non-government spending in our political system on our democracy. The notion that such contributions would neither create corruption nor cause Americans to lose confidence in our republic – as the Supreme Court argued in its Citizens United ruling – is completely disconnected from reality. I also know from conversations with other Conservatives that many have deep reservations about the money race outside the state, but are not prepared to give up the former advantage of the Republicans here. Now that the tide has turned on us, it is time for Conservatives to return to the First Principle.

Our constitution protects American citizens from an isolated, unified government. The 10th amendment reserves the states and people all powers that the federal government was not expressly granted. It underpins the dull motto of my state: “Live free or die.” But the money aristocracy of the blue state struggle gutted federalism, our central protection of the constitution against the tyranny that grows in the dark swamps of concentrated power.

The left is using its money advantage for the blue state to surgically target and overwhelm Swing State, Swing Congressional District, and Swing Statehouse Control Elections. While Republicans did remarkably well in voting races in 2020, the House and Senate candidates with the most money won over the past 11 cycles 92 and 80 percent all the time. In almost every swing election, the new kingmaker focuses on nongovernmental funds sourced from a small number of extremely wealthy individuals and brokers who, in most cases, control the flow of financiers. Instead of state voters and party activists, this new aristocracy is choosing our candidates for us. Basis, locally funded candidates are unprofitable and invisible. The candidates have lost control of their own campaigns. Local and state priorities have been submerged. Most critical to what remains of federalism is any swing election nationalized.

Just look at the two Georgia Senate races that led the Senate to democratic control. These races were the most expensive ever with nearly $ 900 million distributed among Georgia voters.

The race alone between Democrat Jon Ossoff and Republican incumbent David Perdue was incredible $ 510 million in total expenditure, with national expenditure outside the group exceeding the expenditure of the candidates themselves. In comparison, prior to 2018, Pennsylvania was the Senate’s most expensive race of all time $ 180 million.

And if liberal billionaires funding such races aren’t bad enough, the shell game of harmless sounding organizations giving each other and then SuperPACs, with the original donors of that money often hidden from view, means there is no way of knowing whether the original The source of the contributions even comes from this country. Entrepreneur two years ago Imaad Zuberi pleaded guilty to forwarding illegal donations from a Saudi citizen to Barack Obama’s 2012 re-election campaign. With vicious foreign interests playing a more active role in the American election, It is likely that significant illegal foreign contributions will be laundered in US SuperPACs.

Yes, a 28th amendment would approve limits. But it would preserve freedom by completely delegating the “how” to the legislature. Montana may want to reinstate its corporate contributions ban law. New Hampshire may want to enact a donor-voter bill banning non-state campaign funds. Congress may decide to allow greater direct contributions from identified individuals to candidates, but limit the flow of campaign funds through outside groups. The need for a 28th Amendment is enforced by fundamental conservative principles and by our founders’ vision of government accountable only to the governed and free from the risks of corruption and tyranny associated with concentrated power.