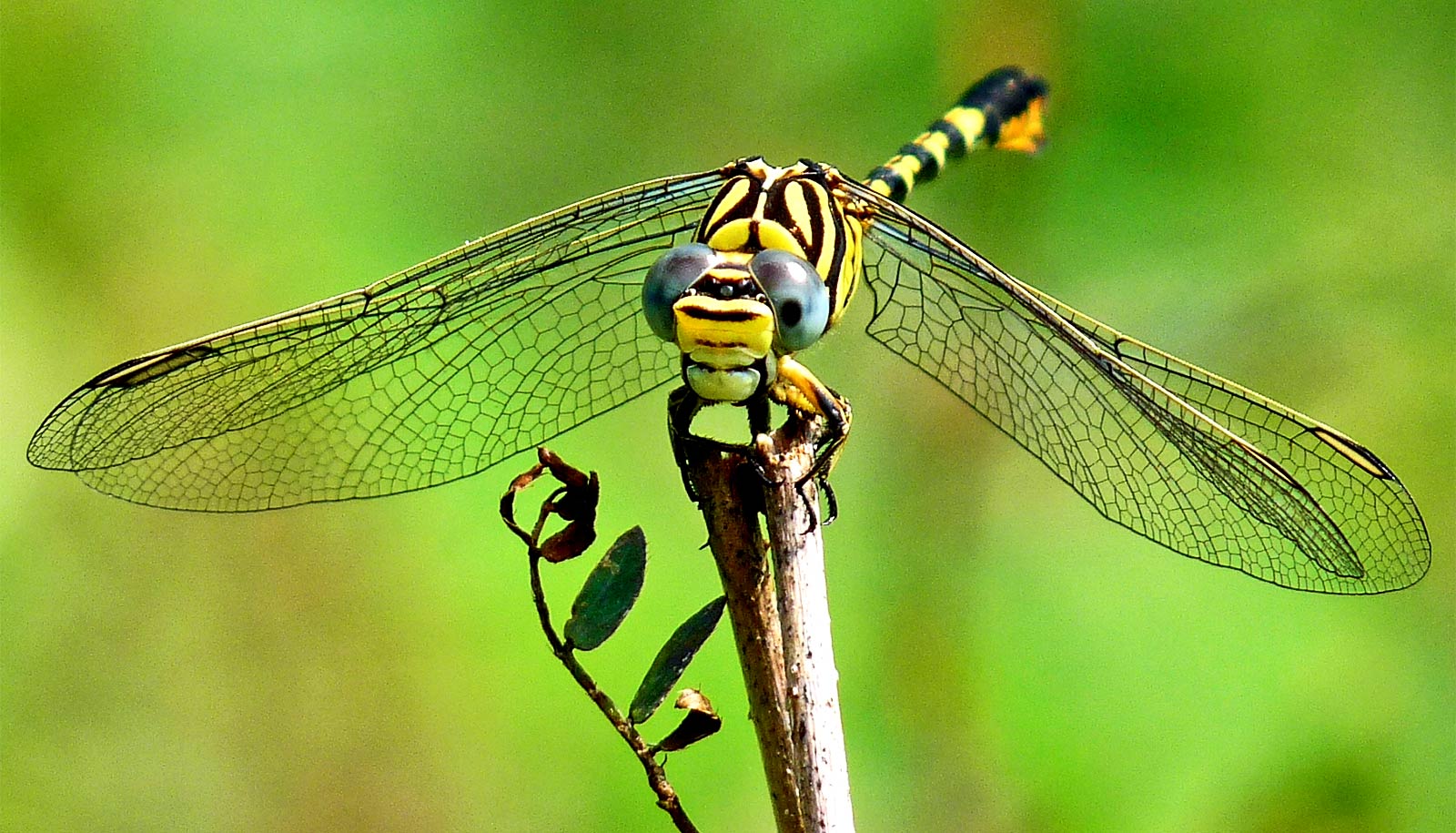 You are free to share this article under the Attribution 4.0 International license.

Less pigmentation will keep them cool, but could make it difficult to find a partner, according to their new study.

“Our study shows that male dragonfly wing pigmentation evolves so consistently in response to climate that it is among the most predictable evolutionary responses ever observed for a mating-related trait,” says Michael Moore, postdoc at the Living Earth Collaborative at Washington University in St. Louis.

“… male dragonflies may have to adapt to global climate change by developing less wing color.”

“This work shows that mating-related traits can be just as important for the adaptation of organisms to their climate as survival-related traits,” he says.

Many dragonflies have dark black pigment spots on theirs wing which they use to woo potential partners and intimidate rivals.

“Aside from their function in reproduction, a lot of dark pigmentation on the wings can heat dragonflies up to 2 degrees Celsius, a pretty big shift!” Moore says that would be roughly a 3.5 degrees Fahrenheit change. “While this pigmentation can help dragonflies find mates, additional heating could also cause them to overheat in places that are already hot.”

The researchers were interested in whether this additional warming could force dragonflies to develop different wing pigmentations in different climates.

For this study, the scientists created a database of 319 dragonflies species based on field guides and citizen science observations. They examined the wing ornaments shown in photographs submitted to iNaturalist and gathered information about climate variables in the locations where the dragonflies were observed. The researchers also directly measured the amount of wing pigmentation on individual dragonflies from nearly 3,000 iNaturalist observations in a focused group of 10 selected species. For dragonflies in each of these 10 species, the scientists assessed how populations differ in the warm and cool parts of their geographic distribution.

Whether comparing species with hotter and cooler geographic areas or populations of the same species living in warmer areas to cooler areas, the researchers saw the same thing: male dragonflies almost always responded to warmer temperatures with lower wing pigmentation.

“Given the expected further warming of our planet, our results suggest that the male dragonflies may have to adapt to the global world at some point Climate change by developing less wing color, ”says Moore.

The study includes projections based on global warming scenarios that suggest that pigmentation on male wings will continue to shrink over the next 50 years as the Earth warms.

But the changes do not happen in the same way for both sexes.

“… the consequences are something we don’t know very much about yet.”

“In contrast to the males, female dragonflies do not show any major changes in the change in their wing color with the current climate. We don’t yet know why males and females are so different, but that shows that we shouldn’t assume that the sexes adapt to climate change in the same way, ”says Moore.

Dragonflies have different amounts of pigment on their wings that help males and females of the same species to identify each other. One of the interesting implications of this research is that females may no longer recognize males of their own species if the pigmentation of the male wings develops in response to rapid climate changes and the female pigmentation develops in response to something else.

This could result in them mating with males of the wrong species.

“Rapid changes in pairing-related traits could hinder a species’ ability to identify the right mate,” says Moore. “Although our research suggests that these pigmentation changes are likely to occur as the world warms up, we don’t yet know much about the consequences.”

The study will appear in the Proceedings of the National Academy of Sciences.

Other researchers from Washington University in St. Louis and Saint Louis University contributed to the work.