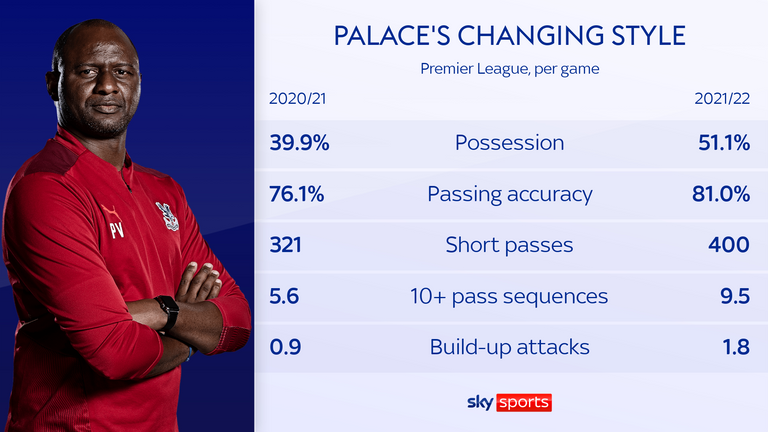 The move started with a Joel Ward throw-in deep into Crystal Palace territory and ended, 58 seconds later, with Conor Gallagher firing an angled finish into the corner of the Brighton net.

In between, the ball traveled through every Palace player, including goalkeeper Jack Butland. The patient, 20-pass build-up carved Brighton open and while the goal was not enough to win the game, the mention of it still prompts a smile from Patrick Viera a week later.

“I knew it was a nice goal in terms of the build-up from the back, but I didn’t realize in the moment that every player had touched the ball because I was too into the game,” he tells Sky Sports. “It was good to see it back, because it shows the way we want to play.”

Vieira is speaking over Zoom from the club’s Beckenham headquarters, where, over the last six months, he has overseen a transformation. The Premier League table shows Palace in roughly the same position as last season. But, from personnel to playing style, pretty much everything else is different.

Please use Chrome browser for a more accessible video player

Free to watch: Highlights from Crystal Palace’s 1-1 draw with Brighton

But the football was functional rather than thrilling and there was an appetite for change. Vieira came in with a remit to overhaul the team and modernize the style and that is precisely what he has done.

“That was the direction of the chairman [Steve Parish] wanted to take and it is one of the reasons I am here as well because he understood the way I wanted the team to play,” he says.

“It was a risk, obviously, to change the style, and even more when you have that kind of transition of players, where you lose 12 and bring in eight young guys without much experience in the Premier League.

“So, when you are looking at what was going to be the first 10 games of the season [which included meetings with Chelsea, Tottenham, Liverpool, Arsenal and Manchester City], you see all the elements are there to have a difficult period.

“But with the support to implement my philosophy, and with the togetherness of the football club – and when I talk about togetherness, I am talking about the chairman, [sporting director] Dougie (Freedman), and the staff – we managed to get through it, allowing me to focus on the way I wanted to team to play.”

Vieira shakes his head immediately when asked if the scale of the task at hand made him think twice about taking the job – “I was really excited about coming,” he says – and Palace fans are glad he didn’t.

The 45-year-old, a three-time title-winner with Arsenal who cut his teeth as a coach at Manchester City’s academy before spells in charge of New York City FC and French side Nice, has instilled optimism in the stands and brought freshness on the pitch.

A raft of youthful summer signings, including Gallagher (21), Marc Guehi (21) and Michael Olise (20), has lowered the average age of the side by two years, and while Palace sit 11th in the Premier League table ahead of Sunday’s meeting with Liverpool, the underlying data ranks them as the eighth-best performers in the division.

Do the numbers offer encouragement to Vieira?

“When you look at the data side of things, you can say, ‘Yeah, we should be a little bit higher in the table’, and that’s positive,” he says. “But on the other side, it’s about trying to understand why you are not where you are supposed to be, or where you want to be.

“It’s about understanding and trying to find the things that will make us a better team so we can improve those kind of details to get better results. So, overall, yes, it’s positive, but it’s not enough for what I want. I will always be demanding and wanting more from the players because I believe they have the potential to do more.”

The main areas for improvement are clear to him.

“I would like the team to be more ruthless in both boxes,” says Vieira. 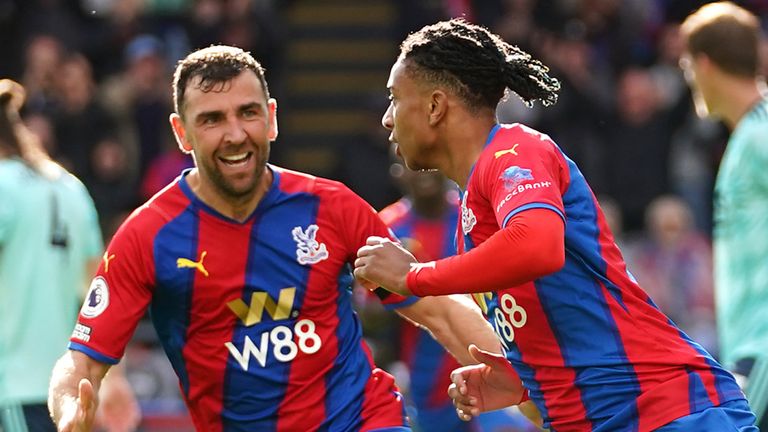 “That means on the defensive side, but at the same time, when we are winning 1-0 and we have a couple of chances to score the second one, I want us to have that kind of ruthlessness to score the goal that would allow us to go two ahead.

“It is about having a maturity, and that comes with experience. Hopefully, in the second half of the season, it will be one of the areas we really improve, but it does take time to get to that.”

Vieira’s philosophy is vital to him. “I knew that if I decided to go into coaching,” he says, “this would be how I would like to see my teams play, because when I go to watch matches, I like this kind of intensity, possession and trying to play forward and score goals.”

But he is a pragmatist too. In October, he steered Palace to a 2-0 win at Manchester City with just 32 per cent possession. On Sunday against Liverpool, he knows they will need to be flexible again.

“The goal against Brighton is good because it highlights the way we want to play, but we are not going to score goals like that every weekend,” he says. “We need to understand that scoring in different ways is as important as scoring in that way.

“It’s important to be consistent with style, but at the same time it’s important to have the right gameplan depending on the team you are going to play. Obviously, if you want to have possession when you play against Manchester City, for example, you know that is… not impossible, but really difficult.

“So it is about knowing that and saying, ‘What are we going to do instead?’ That is another side of the game we need to improve as well, when we don’t have the ball.

“That is something we have to learn and we have to put more emphasis on that because those kinds of teams have the philosophy and the players, so it will be difficult to match them on that side.

“I’m not telling you we are going to change our philosophy, but we have to take into account the strength and the quality of the opposition team.”

Please use Chrome browser for a more accessible video player 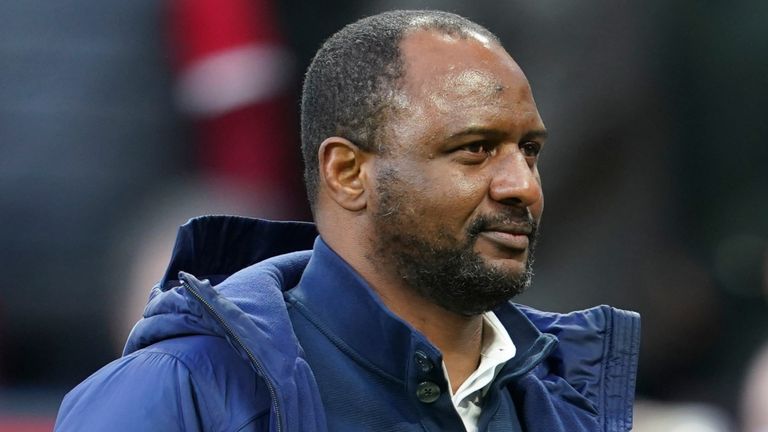 That certainly applies to Palace’s next opponents.

Liverpool’s 2-0 win over Vieira’s former club Arsenal on Thursday in the Carabao Cup semi-final showed they remain a formidable proposition even without Mohamed Salah and Sadio Mane but Crystal Palace will at least have the visceral support of a bouncing Selhurst Park behind them.

Under Vieira, they have accrued 71 per cent of their Premier League points there, and only lost twice – to Aston Villa and West Ham – in all competitions. The connection between fans and players feels stronger than ever this season. 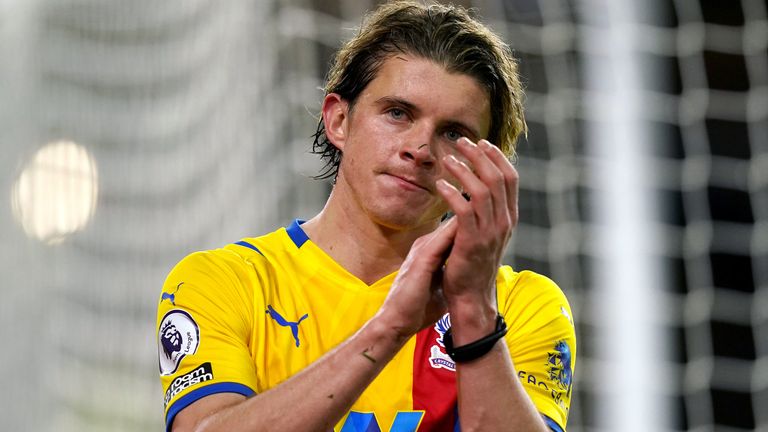 “One of the ways we can do that when we are on the field is to play with passion and love and determination, because those fans deserve that.”

Vieira uses Gallagher as an example. The Chelsea loanee has earned plaudits for his goals and assists this season but it is his work rate that has most endedeared him to the fans, according to his manager.

“I think the way that Conor plays reflects really well that connection we have with the fans,” says Vieira. “This is one of the reasons why he is one of the fans’ favorites as well. Those qualities are what our fans love, when players on the field play with enthusiasm, with happiness.

“Of course, they understand the game too. They know that making mistakes, passing the ball at the wrong time, is a part of the game. But what they want is for the players to play with soul and heart. I think they have been doing that fantastically well.” 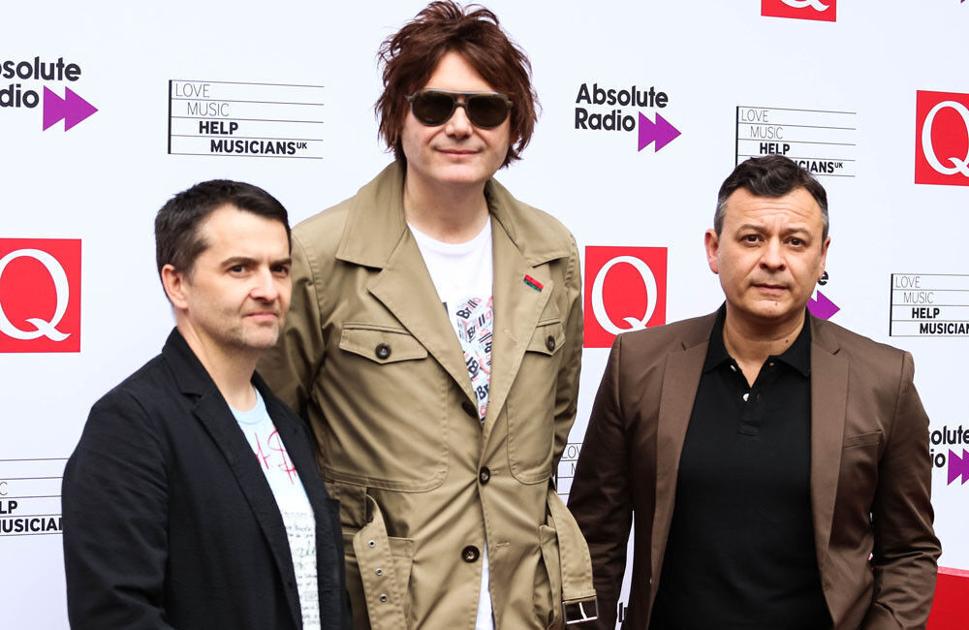