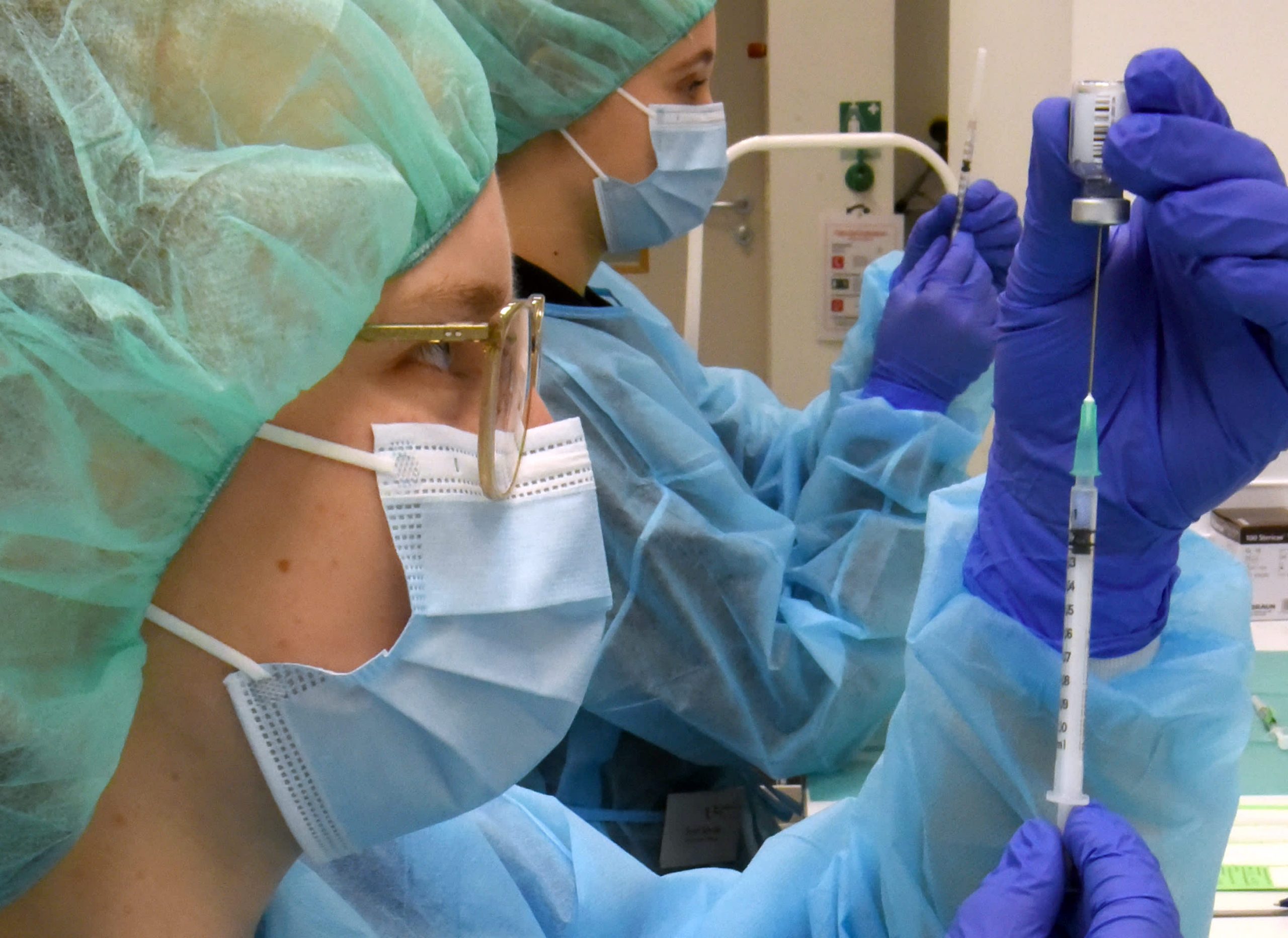 Pharmacy students Anne Brandt (l) and Sarah Schulz are preparing six syringes from a vial with the SARS-CoV-2 coronavirus vaccine from Biontech / Pfizer for vaccination of medical staff at the Leipzig University Hospital. There are currently more requests for vaccination appointments than can currently be offered.

Since Germany started its vaccination campaign together with the rest of the EU at the end of December, it has encountered a number of logistical challenges.

Now, nearly a month after the program began, the slow progress made by some German lawmakers and health professionals is causing frustration and concern.

Health Minister Jens Spahn had targeted 300,000 vaccinations per day, but the country has not yet achieved this. Data from the health department, the Robert Koch Institute, Published Tuesday showed that just over 62,000 vaccinations (most of which were first-time doses) had been given in the past 24 hours.

Since the start of vaccinations in Germany in all 16 federal states on December 27, almost 1.2 million people in Germany (the priority groups are currently healthcare workers, residents of nursing homes and employees, as well as the elderly) have received a first dose of the coronavirus Vaccine and nearly 25,000 have received their second dose.

In contrast, the UK, which was the first country in the world to approve and introduce the Pfizer BioNTech vaccine (partly developed in Germany), and the Oxford-AstraZeneca University candidate in early December has started its Covid vaccination program with over 4 million people so far vaccinated on their first dose of vaccine (over 450,000 had their second dose) and At the end of last week, there were more than 300,000 vaccinations a day.

The EU had a policy of buying coronavirus vaccines as a block, but some countries, including Germany, also made their own additional purchase agreements.

Nonetheless, supply problems were already a problem at the beginning of the vaccination campaign in Germany, as vaccines were not available in certain centers and other difficult logistical problems arose with the vaccination of his priority groups such as the elderly. This has resulted in inconsistent vaccine delivery performance from state to state within the country.

Dr. Stefan HE Kaufmann, a renowned immunologist and microbiologist in Germany and founding director of the Max Planck Institute for Infection Biology in Berlin, told CNBC on Tuesday that the vaccination process was associated with challenges from the start.

“The number one priority (in the vaccination campaign) is currently the elderly and people with serious illnesses, especially in children’s homes. This process is ethical, but very time-consuming. It also includes health care workers and medical staff in nursing homes and hospitals. Apparently some of the nursing home staff are hesitant about vaccination, “he noted.

Fenna Martin (C) vaccinates Marielotte Kilian (L), 87, and Richard Kilian (R), 86, against Covid-19 in the vaccination center, which was installed on January 19, 2021 at the convention center in Wiesbaden, western Germany, which opened in the western state of Hesse its first six vaccination centers in the midst of the novel coronavirus.

So far, only the vaccines developed by Pfizer, BioNTech and Moderna have been approved for block use by the European Medicines Agency. The easier to store and transfer (and cheaper) candidate from AstraZeneca and Oxford University has not yet been approved.

When it comes to introducing vaccines, time is of the essence, especially in cases where there is an increase due to the more transmissible mutations. Nevertheless, Germany has registered fewer cases than many of its neighbors and has recorded just over 2 million infections to date. The death toll stands at 47,958.

A key problem for both the UK and the EU is that supply cannot meet current demand for vaccines, and Germany was no exception. with early reports from people struggling to get a vaccination appointment due to lack of doses. But vaccine manufacturers have promised to increase production and deliver millions more cans to be dispensed over the next few weeks and months.

In the meantime, however, “the doses secured for immediate use are insufficient,” said Kaufmann.

“While so-called vaccination centers have been set up throughout Germany, vaccines for a rapid maximum vaccination rate are currently lacking in these centers. (The) hope is that the process will be accelerated after the difficult and time-consuming vaccination has been achieved (at nursing homes),” he said and noted that the speed of the German vaccination campaign “would have been faster if more doses of BioNTech and Moderna had been secured”.

“In my opinion, everything must be done to get more doses for immediate or short-term use. This is all the more important as mutant strains that could evade vaccine-induced immune responses are becoming more common,” he warned.

Germany is not the only one who sees a slow start to its vaccination campaign. The European Commission has been criticized across the EU for failing to procure enough vaccines for the block.

Florian Hense, European economist at Berenberg, told CNBC that the approval and procurement process has left the EU behind, or at least behind, other countries like the UK and the US when it comes to sourcing vaccines.

“Since the EU negotiated and approved vaccinations with pharmaceutical companies on behalf of its member states, the German vaccination campaign was always ‘un-German’, regardless of what you associate with the term,” he told CNBC on Monday.

Elderly people who have just been vaccinated against COVID-19 wait briefly for side effects before leaving the vaccination center at the Messe Berlin exhibition center on the opening day of the center during the second wave of the coronavirus pandemic on January 18, 2021 in Berlin, Germany. The center is the third to open in Berlin. Three more are to be opened in the coming weeks as soon as supplies of the Pfizer / BioNTech and Moderna vaccines pick up speed.

Needless to say, other parliamentarians have criticized the government’s overall strategy. Dr. Janosch Dahmen, doctor and German MP for the Greens, told CNBC that he was “very concerned because Germany is already behind”.

“The progress of the vaccination campaign is far too slow and one of the reasons is the supply bottleneck. The more pressing problem, however, is that the vaccination infrastructure shows several problems, mainly staff shortages, distribution problems in the federal states and much more too much of a central approach,” he said.

“As a doctor and a politician, I am very concerned about the situation here and, apart from all the efforts we need to make to make the nationwide vaccination campaign more effective, we need to build bridges through testing, self-testing and testing, and we need to put more effort into contact tracing which is another important part of fighting this pandemic, “said Dahmen.