Immediately after winning a huge gold medal at the Great American Beer Festival, Coronado Brewing Company announced the launch of their newest year-round offering, Palm Sway Island-Style IPA. The Island-Style IPA is an ale that offers certain characteristics of a cloudy IPA (i.e. tropical, juicy) but ends up clear and crisp through the use of Cal Ale yeast. It’s filled with an abundance of hops from New Zealand and the West Coast, including Chinook, Citra, Comet, El Dorado, Mosaic, Motueka, and Waimea, which give the beer incredibly juicy, fruity notes of pineapple, mango, stone fruit, citrus, and pine.

“In 2020 we brewed an island-style collaboration with our friends at Maui Brewing that was an absolute hit,” says Mark Theisen, Head Brewer of the Coronado Brewing Company. “We knew that at some point the style would be a perfect match for our year-round portfolio, so we got down to work at the brewery. After months of research and development, we were finally ready and very excited to send the beer to GABF for evaluation. The gold medal last weekend is just the icing on the cake. “

Palm Sway Island-Style IPA is a mellow beer specially made to get you into the island state of mind. Imagine opening your first beer with your feet up while a breeze is blowing in your favorite island paradise. For some it is the white sandy beaches of Hawaii, for others it is the perfect shady spot under a palm tree in front of the Hotel Del Coronado. Wherever that place is where you can truly escape the real world, Palm Sway is brewed to get you there.

Palm Sway complements Coronado’s year-round 16 oz 6-pack range alongside the company’s best-selling Weekend Vibes IPA and innovative newcomer Orange Avenue Shandy. Palm Sway offers our year-round beer portfolio a completely new and unique flavor profile. Our award-winning Weekend Vibes have an incredibly bright and crisp profile, while Palm Sway offers a very juicy and tropical taste experience. “The craft beer industry is very much driven by India Pale Ales, and we have absolutely more room to grow in that style segment,” said Clinton Smith, CCO of Coronado Brewing Company. “Palm Sway is officially an award-winning IPA after the Great American Beer Festival, and the excitement for this launch has been tremendous among our team, our distributors and retailers.”

Palm Sway IPA debuts on Friday, September 24th at the three Coronado locations. The beer will be available in 16-ounce cans of 6-packs and on tap throughout Coronado’s distribution network. For more information on Palm Sway, see www.coronadobrewing.com. Stay on the coast. Thank you very much. 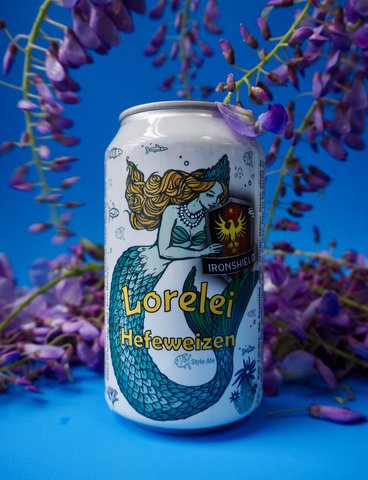 As a teenager, I lived in Braunschweig for two summers as an exchange student. If you’ve read my column over the past two years you will know that this was when my love for beer sparked. Unfortunately, my virginal taste buds had no idea that my first introduction to the beer world included the best of the best in my opinion.

I accidentally set the bar too high. When I turned 21, I went to several Oktoberfest events in Georgia to find beer that was even remotely similar to what I had in Germany.

Seven years later – yes, now you know my age – and I’ve finally found what I was looking for. I’ll admit I forgot what fresh German beer tasted like until I poured Lorelei Hefeweizen from Ironshield Brewing.

Bold yet delicate, this brew conveys notes of banana, cloves, and chewing gum. There is something about its acidity and subtle nuances that intrigued me. Part of me wanted to swallow all of the beer, but I took my time for this. It deserves my respect.

Glen Sprouse, the brewery’s founder and master brewer, has been making German-style beer for over 20 years, and boy, it shows. Focusing on authentic German and Belgian style ales, Ironshield Brewing pays homage to the original masters of the craft.

“If this were music, I would be a classical musician,” said Sprouse. “You can make a lot of music with three chords, and rock and roll with three chords is a lot of fun. But there is also a lot to be said for the classics. What I’ve done and with breweries I’ve opened over the years has been focused on beer that made beer famous over the past thousand years. “

Sprouse shared that Hefeweizen has been brewed in Germany since the early 13th century, making it a style that is inextricably linked to the history of beer. He noted that the style can prove to be particularly challenging, requiring specialized equipment as well as skilled brewers.

When making Lorelei Hefeweizen, Sprouse said he brewed the style the way someone in Germany would, and made sure to comply with German beer purity law, also known as the Purity Law. The decree was issued in 1516 and limited the ingredients in beer to only water, malt, hops and yeast. It remained part of German law until 1987. Although newer, more liberal laws have been in force since 1993, many German brewers stick to the old methods and glorify the use of fine hops.

Sprouse said that with traditional wheat beer or any type of German wheat beer, the beer must have a grain bill (raw materials) of over 50% wheat.

“So there are steps in the process where the more wheat you have in the grist, the harder it is to run the process, the higher the total grain bill,” he said. “You could say it breaks the works.”

Most Hefeweizen beer requires secondary fermentation at a higher temperature and pressure than the first time. If this is done wrong, the brewers run the risk of too much pressure building up in the cans. And you know what happens next.

If you are going to try this beer, please pour it into a glass. You will have a hard time finding an American-made wheat beer that sings so sweetly and that deserves your full attention.

Ironshield Brewing is located in 457 N Chestnut St. in Lawrenceville. You can find more information about the delicious beers at ironshieldbrewing.com.