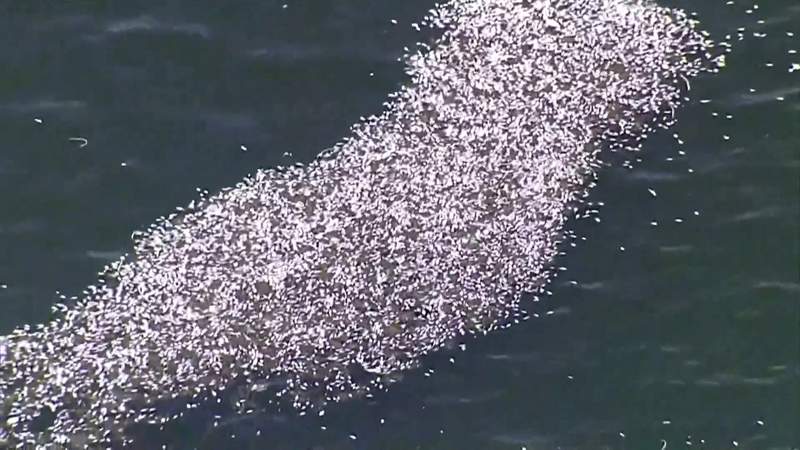 TALLAHASSEE, Florida. – Drones could be used to monitor the red tide, and money should be set aside to offset the local cost of removing fish killed by poisonous algal blooms, state wildlife officials said Wednesday as they attempt to prevent future outbreaks to manage something.

Members of the Florida Fish and Wildlife Conservation Commission said more proactive action was needed as red tide outbreaks will continue to hamper the state, particularly the Gulf Coast, which is grappling with an outbreak in the Tampa Bay area.

Commission chairman Rodney Barreto suggested that a state Red Tide task force consider using drones to monitor waters for outbreaks and assist with cleanup operations. He noted that the sheriff’s office helicopters were being used to coordinate the cleanup of recent outbreaks.

“Let’s go on the offensive. Drone technology is where it is today, ”said Barreto. “I mean it’s amazing. Right? Much cheaper. In any case, much more efficient than sending up a helicopter. “

The current eruption, which has been changing daily since December due to wind and tides in the waters from Pasco County to Sarasota County, has had different effects on the Gulf Coast areas.

The key to tackling the red tide is efforts to improve water quality and reduce nutrients from human sources, such as:

In addition, Gil McRae, director of the Commission’s Fish and Wildlife Research Institute, said one way to prepare for widespread fish deaths is to provide a source of funding to local governments, who are typically responsible for cleaning up the litter .

“We heard about this last event – and unfortunately we knew it beforehand – when we have large fish deaths, the burden tends to be on the level of the government that manages the waste. And that’s always, in Florida at least, always the local government, ”McRae said. “So since the local government has this waste management infrastructure, they really are the only ones that can handle these tons of waste.”

As a result of the current outbreak, more than 600 tons of dead fish washed up along the Tampa Bay coast.

The state distributed emergency funds this year to offset some of the costs of cleaning up fish deaths. Local officials in the Tampa Bay area have asked the state to issue a declaration of emergency that would free up more money and resources.

As of 2019, the state has pumped $ 14.5 million into the Florida Fish and Wildlife Conservation Commission for its Center for Red Tide Research, which has a partnership with the Mote Marine Laboratory in Sarasota

Barreto said another concern the task force could address is public notifications, especially for beach goers.

“When we flew yesterday, you could literally see the red tide. And you can see the people on the beach, ”said Barreto, who took a helicopter tour of the waters off Sarasota on Tuesday.

McRae said beach conditions are updated daily by the commission on their website and on signs posted by lifeguards from Collier County to Pinellas County.

Changes in agriculture will focus on supporting practices such as cover crops, which are expected to slow down erosion and increase water availability. The changes are also intended to include the recording of nutrients used by farmers and government employees during face-to-face visits, and to replace voluntary self-assessment of the implementation of best management practices.

While at Mote Marine on Tuesday, Governor Ron DeSantis said he was “happy with the progress” in the state’s efforts to contain the red tide over the past three years following major water quality problems in areas of southeast and southwest Florida.

“What they are doing here (at Mote) in dealing with the red tide may have application to other types of algal blooms, such as the blue-green algae we struggle with in Lake Okeechobee,” DeSantis said. “Well, I think that was a really good investment. And I think it will pay off. Of course, red tide occurs naturally. We can’t tell people that there won’t be any. But if you have successful mitigation strategies and technologies in place, you’re really making it where it won’t have the impact it had in 2018. “

The White House infrastructure plan will make the US more on par with China as it strengthens the US semiconductor industry, Commerce Secretary Gina Raimondo said on Wednesday.

“This is about outperforming China,” CNBC’s Raimondo Jim Cramer said in a “Bad money“Interview.” If we act now … we will compete with China. It is time to do this to rebuild, especially to put in semiconductors, but we have to get to work to do this. “

The comments came moments after President Joe Biden unveiled a $ 2 trillion package primarily tailored to bridges, roads and other transport initiatives. The proposal also calls for a $ 50 billion investment in semiconductor manufacturing and research.

A global chip shortage, compounded by the high demand for computers and other technological products during the coronavirus pandemic, has put American manufacturers under pressure. For example, ford It will be announced on Wednesday Reduction of automobile production in several North American plants due to the low supply of semiconductors.

Raimondo, who left the Rhode Island governor’s home to join the Biden administration, said semiconductors are “the building blocks of a future economy and a digital economy.” Investing in semiconductor manufacturing will pave the way for basic research, more foundry jobs, professional training and advanced manufacturing, she said.

“I am confident that when the business community big and small has the opportunity to delve into this package, it will find that it is all about competing and winning now and in the future. That is good for business and.” good for workers. ” She said.

The package could face some hurdles in Congress, despite the Democrats’ power advantage. Democrats hold a slight majority in the House and a 50:50 tiebreaker in the Senate. However, Republicans are preparing to object to the size of the package and the White House’s plan to pay for it.