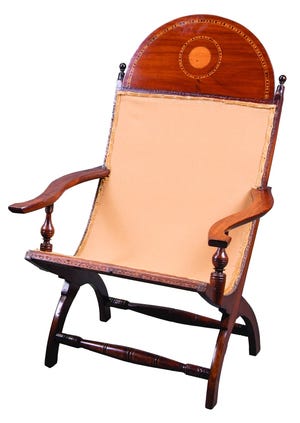 When decorating a room, it’s fun to include something out of the ordinary.

Perhaps you can find an unusual lamp or a modern painting or piece of furniture in a unique style. Try something new and go to an auction to see what sells.

Various types of antique furniture were sold at the recent Neal Auction Company auction, including a Campeche chair. It looked a lot like some modern chairs, but it had a single piece of leather that was bent to make the back and seat on a simple wooden frame. The back was tilted just enough to take a perfect nap. The legs were upside-down capital letters C, one on each side with a center stretcher. It was a perfect conversation piece.

The name “Campeche” comes from its use in the city of Campeche, Mexico, where it was popular in the late 18th century. Historians thought the name came from Campeche wood, but most were made from mahogany. Looking up the history of the chair takes talent as it is also known as the “Spanish chair” or “Butac” (a short form in other words, “Butaca” or “Boutaque” used for the chair). Some call it the “planter’s chair”. Thomas Jefferson had one of these chairs, which he called “Campeachy”.

The chairs, similar to earlier X-frame chairs, were popular in Louisiana and were shipped to New Orleans. They were used in Philadelphia in the 1830s and in London around 1845. Some modern artists, including the silversmith William Spratling, created similar pieces in the 1950s. The chairs are still made and sold in the United States today.

Question: I have some “Lucy” Barbies that were never taken out of the package. I know they are collectibles. Are they worth anything?

Reply: “I Love Lucy” was a popular TV show starring Lucille Ball and her husband Desi Arnaz, who also played Lucy’s TV husband Ricky Ricardo. It ran on CBS from 1951 to 1957. Mattel made “I Love Lucy Dolls” in costumes depicting episodes of the show from 1997 to 2011. Lucy, Ricky, and Ethel dolls were made. “I Love Lucy” Kelly dolls, representing Lucy and her friend Ethel and smaller, were made in 2008 and 2009. The dolls in their original boxes sell for $ 10 to $ 50. A few in mint condition cost over $ 100.

Q: I have a Carter fountain pen that belonged to my father. It is marbled black with gold-colored ribbons on the cap, a 14 carat gold nib, and is 5 1/2 inches long. Does it have any other value than sentimental value?

The Carter Pen, the first fountain pen to be named Carter, was introduced in 1926. It was made of hard rubber and was advertised with the slogan “You know the ink”. Celluloid pencils were manufactured from 1927. The Pearltex Pen, made from a new iridescent material that combined mother-of-pearl and plastic, was introduced in 1929. Cheaper pens were made from celluloid and hard rubber. Streamlined style pens began to be produced in 1930.

Carter stopped making pens in 1932, but continued to make ink. The company was sold to the Dennison Manufacturing Company in 1975. Carter pens were only made for a few years and are collectibles. Condition, material, style and rarity determine the price. They sell for $ 15 to $ 450.

Q: I recently found an old June 1921 issue of Motor Travel Magazine, priced at 35 cents. I also found an August 1921 issue of People’s Home Journal priced at 15 cents. Both are in very good condition. Do they have any value? Where can i sell them?

A: The People’s Home Journal was published from 1885 to 1929. It included household tips, recipes, stories, and other articles appealing to housewives. It could sell for $ 2 in an antique bookstore. Motor Travel was one of many automobiles and motoring journals published in the 1920s after owning a car became common. Old magazines don’t sell much, but some old ads are decorative. They can be cut out from the magazine and framed. If you want to sell the magazines, contact a seller who manages used books.

Q: My grandmother had a full set of Blue Willow china. Can you give me the approximate value? It is marked “Flair, Japan” in a rectangle. Underneath it says “Blue Willow, 603.”

A: Blue Willow dishes were first made in England in 1780. The pattern, which depicts a Chinese landscape with willow trees, a bridge, and birds, has been copied by many companies. Flair, a company in Japan, likely made Blue Willow dishes in the 1950s or 1960s. Plates sell online for $ 6-10 each. You didn’t say how many pieces you had, but large dinnerware sets are hard to sell.

TIP: Old or New Iron Garden Furniture: Old iron furniture usually weighs more and the iron is smoother than new iron. Also, look out for rust and faded paint. But remember, this can also be faked.

Terry Kovel and Kim Kovel answer the reader’s questions sent to the column. Send a letter with a question describing the size, material (glass, ceramic) and your knowledge of the item. Just add two pictures, the object and a close-up of any marks or damage. Make sure your name and return address are included. By submitting a question, you are giving full permission to use it in any Kovel product. Names, addresses or email addresses will not be published. We do not guarantee that photos will be returned, but if a prepaid envelope is included we will try. Answered questions will appear in Kovels Publications. Write to Kovels (name of this newspaper), King Features Syndicate, 628 Virginia Dr., Orlando, FL 32803, or email collectorsgallery@kovels.com. 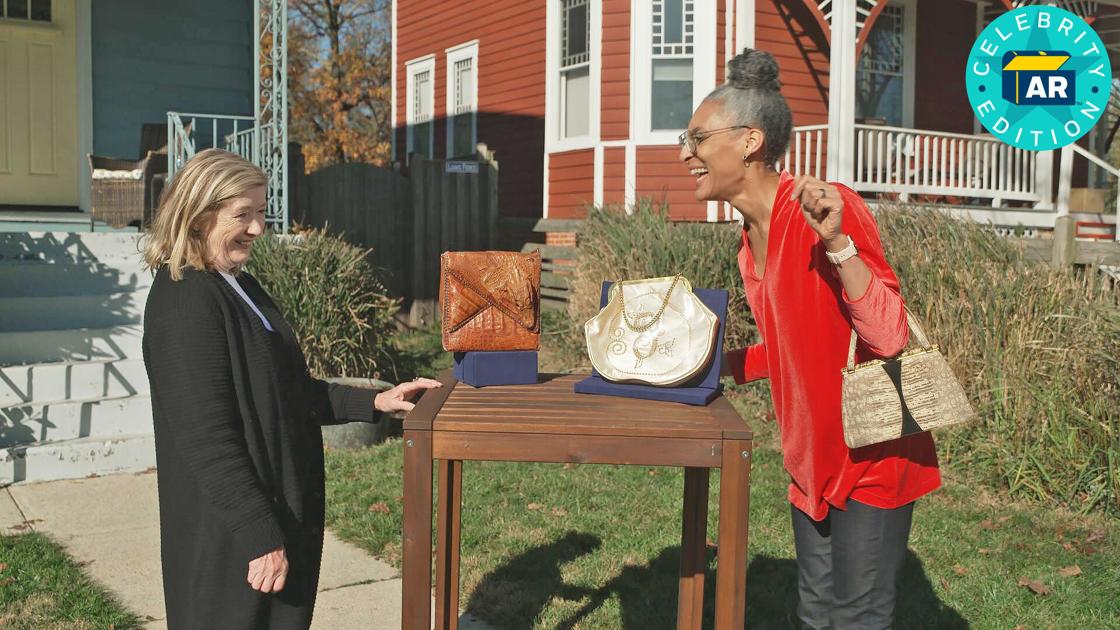 “This is true across the board for everyone we’ve been to on this show and everyone else: they’re people like you and me,” says Bemko. “They are really curious about what they own and want to know, and not just because of the money. It’s not just about value. “

The Celebrity Episodes were a clever response to the pandemic and an opportunity to shake things up during the Antique Roadshow’s 25th anniversary.

Since flying wasn’t an option, the celebrities who were selected were within driving distance of the show’s headquarters in Boston at the WGBH. Everyone had to drive in separate cars, stay masked until the cameras rolled, and COVID-19 was tested regularly. Some celebrities felt more comfortable displaying their collectibles on their lawn. Others allowed reviewers in.

For Hall, a fan of the show, it was an opportunity to get answers about the things her family has long loved, including an antique table, old seltzer bottles, and chic handbags her grandmother collected.

Hall learned something too. Her high chair turns into a stroller, which neither she nor her mother knew until the appraiser pointed out. “It was just so wild,” she recalls. “I never knew it did. That was the biggest shock. “