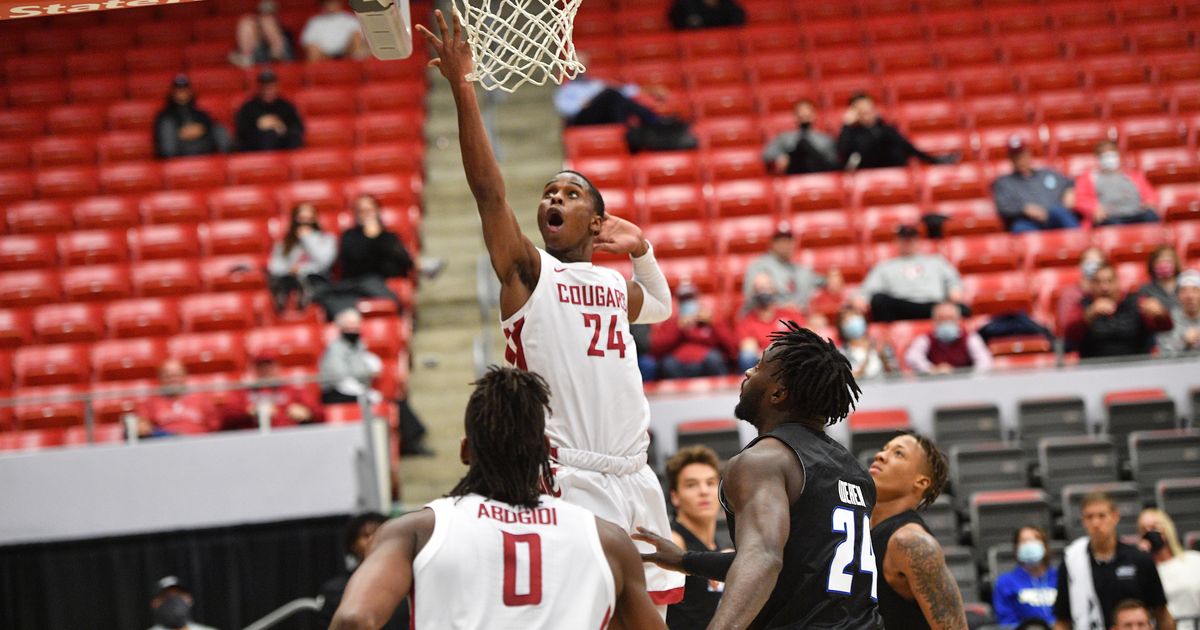 PULLMAN – Stylish guard Noah Williams froze a defender on the perimeter with a hesitation and cleared a trail to the basket about the middle of the first half.

Williams, like the rest of that Washington state basketball team, felt it early against UC Santa Barbara.

As he got off his feet, the pre-eminent Seattleite of the Cougs put a hand behind his head and assumed the “Flex” pose made famous by Karl “The Mailman” Malone.

“I thought I made a nice move so I just flashed it up a bit,” said Williams. “I didn’t even think about it – it just happened.”

Williams’ dazzling layup embodied the first half of the Cougars, which was not lacking in electrifying moments.

The WSU had plenty of style points during a 73-65 victory over the gauchos at the Beasley Coliseum on Monday night – a result that wasn’t as close as the score suggested. The Cougars started hot, building a 23-point lead late in the first half, then held a double-digit lead until the end of the game.

In a season full of expectations, the Cougs (3-0) won their first three competitions with ease. But the first two weren’t as convincing as this one.

It came up against the preseason favorites of the Big West Conference, who had qualified as 12 seeded players for the NCAA tournament last season and fell back to Creighton just under 5th place in Big Dance.

“They are used to winning,” said WSU coach Kyle Smith. “We’re not there yet. … In order to be able to play so well and be at the top (early on), I didn’t expect that at all. I was really tickled. “

The WSU was in control from the start. His defense was stifling, his front-court tandem of rising stars from Africa shone, and his transition offensive made for a number of highs – like Williams’ Mailman impression.

“I can’t take full responsibility for what he does,” said Smith of Williams, “but he likes to have fun outside. He’s definitely a showman. He’s a unique personality. And you know what? Our boys love him and he plays hard and he competes. “

Cougar’s sophomore year after Efe Abogidi stole the show in the second half.

The ultra-athletic Nigeria product staged a block party at which gaucho layup attempts were consistently timed and sent out.

Abogidi also provided a boost in the scoring list. Overall, he posted a team high of 18 points to 6 of 7 off the field, racked up eight rebounds, and hit six shots – the most blocks from a coug in five years.

“It’s just the timing,” Abogidi said of the blocks. “I was on the Nigerian national team during the summer and just to see how some NBA players play it helps you learn how to attack the ball really efficiently.”

Freshman Big Man Mouhamed Gueye, a native of Senegal, contributed eight points and nine boards to his best show so far for the WSU. He racked up an offensive rebound and pounded home a poster dunk to extend WSU’s lead to 17, around 1:30 p.m. in the second half.

Williams showed his improved ball handling and scoring with several nifty fakes and 13 points (at 6 of 12 shoots) to go with his five boards and three steals. He attributed part of his growth to working the off-season alongside professionals like Jamal Crawford and Isaiah Thomas.

“Going to those open runs (open tournaments in Seattle) and forcing myself to play point guard and get the ball up definitely helped a lot,” said Williams.

Newcomer guards Tyrell Roberts and Michael Flowers each scored 11 points as the WSU continued to show their expanded scoring options earlier this season.

“It’s huge. It takes a lot of weight off everyone,” said Williams. “We have a lot of teammates we can trust and that’s the good thing about us. I think we can be a good NCAA tournament team.”

The Cougars took a double-digit lead after seven minutes and kept the gauchos for five minutes without a bucket in a route that had seven UCSB turnovers and crisp, stimulating plays during the break, especially from Williams and Flowers.

Williams turned a cross-court pass to guard Tyrell Roberts for a scoop layin, and Flowers linked up with freshman post Mouhamed Gueye on back-to-back fake-out feeds from the area – Gueye pounded home dunks.

It’s early on, but the players agreed that the Cougars start represented WSU basketball in its ideal version.

“We definitely want our identity to be a team that creates a lot of havoc and gets stops on defense and that might be a cliché, but defense wins games,” said Williams.

The WSU only lost three balls in the first half and shot 53%. The Cougs slowed a bit in the second half, finishing 46% off the ground while UCSB stayed within relative striking distance. However, the gauchos never got close enough to really threaten. The Cougars controlled the color and Williams put the finishing touches on it with successive fading sweaters.

“It’s been a great first half,” said Smith. “We got shots every time. Our defense was really, really good, then we relaxed a little in the second half because we were tired. “

UCSB Big Man Amadou Sow led all players with 25 points and grabbed 11 boards. The gauchos shot 39% and 2 out of 13 from a distance. The WSU did not impress outside the bow either and shot 2 of 16.