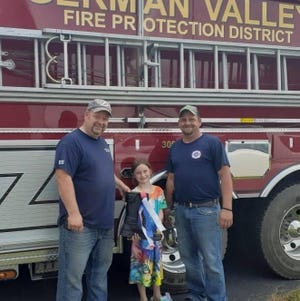 GERMAN VALLEY – German Valley Firefighters recently held their annual fundraiser, but it was a small donation that warmed their hearts and made the most of the smiles.

As firefighters were preparing for their annual fundraiser for the pork chop dinner at the German Valley Days festival, 7-year-old Taylor Geddes strolled up with a simple request.

“We were preparing for our dinner and she just went over to us and asked for one of our boots because she said she was going to set up a lemonade stand,” said German Valley Fire Chief Eric Bruning.

Taylor didn’t know any of the firefighters, but she took it upon herself to do something to help. Bruning gave her a firefighter boot and she set off to set up her stand.

Seeing an opportunity with a lot going on, she got to work.

“She has an entrepreneurial spirit, I think,” said her father, Kip.

More:She worked hard to be a role model for her daughter. Now she owns this Freeport boutique

Taylor found a lot of thirsty people that day, or maybe just a few people who wanted to support her ambition, because a little later she returned to the fire department with a trunk full of $ 31.

She said she had a plan when she and her father and mother loaded Annie into their car from their home in Ridott and headed for German Valley Days. But the plan was just to set up a lemonade stand on the spur of the moment. What she would do with the collected money had not yet been decided. When she had done her business for the day, she went to the fire department.

“I just decided to donate the money to them,” said Taylor.

More:“Now is my time”: women entrepreneurs are strengthening the retail scene in downtown Freeport

Bruning said all members of the fire department were touched by such a generous action and although they sold 1,700 pork chop sandwiches that day, it was Taylor’s $ 31 that got the most attention.

“She did it all by herself. We had a good audience for our fundraiser, but that was another $ 31 and we didn’t have to work for it,” he laughed.

He said the firefighters were more than grateful to Taylor for her desire to raise additional money for the department. Bruning said all of the money raised through the pork chop dinner – and Taylor’s lemonade stand – will be used to buy supplies needed for the department.

“The tax money we get is only for normal fire-fighting operations,” he said. “All of our fundraisers are for the extra equipment we need.”

Todd McKenna is a freelance correspondent