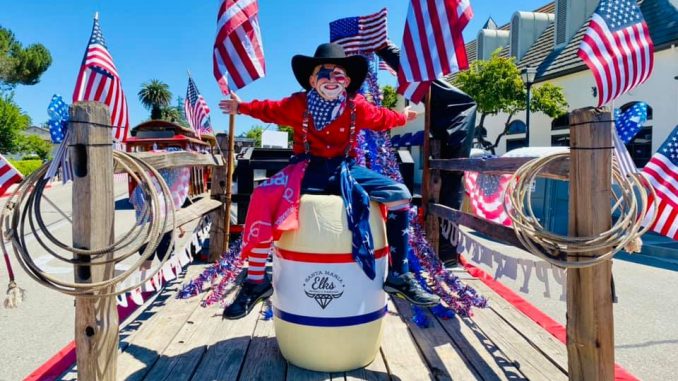 Photo by Robyn Moon Parade 1 – Caleb Moon was named “Most Original” in 2021 for his chariot as Santa Maria Elks Rodeo Jr. Barrelman.

Judging by the crowds along the parade route with revelers from across the state and country, the July 4th parade in Solvang was a huge success.

Known as “the largest small town parade in the Danish capital of America,” this year’s event was slightly smaller than the usual 70 with 52 registrations, but everyone was in high spirits, with the Stars and Stripes celebrating our country’s Independence Day.

According to Master of Ceremonies Allan Jones, who dressed up like “Uncle Sam” for the occasion, Denmark is the only other country celebrating our 4th of July as our twin city is Aalborg, Denmark.

The theme of this year’s parade was “God Bless America”. The great marshals were the emergency room staff at Santa Ynez Valley Cottage Hospital, who honored the frontline professionals who “keep us safe,” according to the parade sponsor, Rotary Club Solvang.

The parade took a more intimate route through the village than in previous years because State Route 246 was unavailable, according to parade chairman Steve Palmer of the Solvang Rotary Club. Against the backdrop of quaint little shops, the parade featured decorative floats, dance groups, bands, antique cars, military vehicles, dancing horses, the traditional Viking ship, the fire department, local businesses and families, all of whom attended the hour-long event. Sweets were thrown at the children, Veggie Rescue distributed bags with baby carrots and swimmers occasionally doused the audience with water from Super Soakers, which especially the children giggled happily.

The Santa Ynez Valley High School Band gave a patriotic concert in Solvang Park. The Rotary also had a food stall there for everyone to enjoy after the parade, and added to the local restaurants, which were also filled with hungry parade goers.

The fireworks display, usually organized by the Santa Ynez Valley Rotary Club, did not take place this year due to time constraints. Hopefully it will come back next year.

“It was heartwarming to see the community gather for the July 4th parade in Solvang this year,” said Palmer. “Even so shortly after June 15th, we were overwhelmed by the positive atmosphere and the smiling faces of the participants and spectators. Thank you to everyone who attended, saw the parade, Solvang City staff, IDK Events, the Solvang District Sheriff’s Department, and Rotarian volunteers. It was a team effort to make this a successful, smooth and fun parade. We look forward to the parade getting bigger and better next year in 2022. “