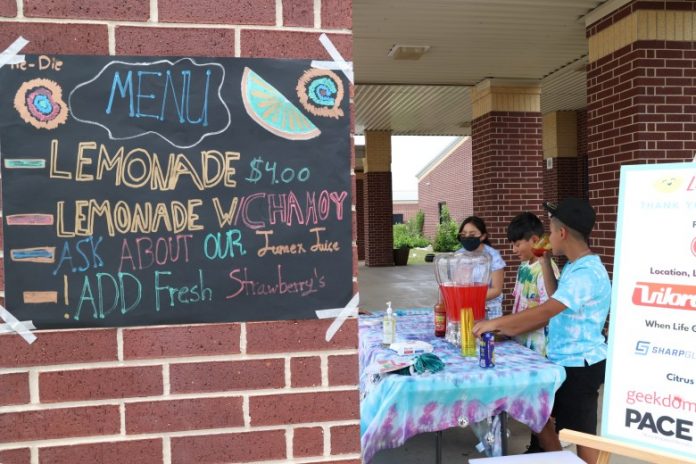 At Roy P. Benavidez Elementary School on Thursday, students looked for potential customers in the shade of an awning while checking their supplies of ice, cups, straws and Jumex juice. As soon as a car pulled into the parking lot, they excitedly announced the arrival of a customer and got into position.

Every student had a job. One filled the small plastic cups with ice while another poured the Hawaiian punch. Another student asked customers if they would prefer a slice of fresh lemon or strawberry in their drinks and added – for a San Antonio note – a dash of chamoy. The finishing touches were a brightly colored, flexible straw and a bottle of Jumex juice. The whole thing cost 4 dollars.

Benavidez Elementary was one of three campuses in the South San Antonio Independent School District that served elementary school students on Thursday as part of lemonade stands Lemonade day, a global youth entrepreneurship program that provides leadership and business skills. The 100 participating students are enrolled at the non-profit educational institution San Antonio Youth‘s Out-of-School Time summer program designed to encourage students to study outside of school.

“It was exciting because we could actually talk to people and sell them something,” said Elizabeth Otero, 10.

Elizabeth said she learned the importance of being kind and polite. Edileen Rocha, 9, said that she always smiled when speaking to a customer, and Sebastian Moreno, 11, said that he likes to talk to people and ask them what they want.

The three locations combined had sales of $ 1,000, and the students will decide how to spend the money, said Christina Casella, SA Youth’s chief development officer. They could split the money among themselves, pool the money to buy something or donate the dollars, or they could do a combination of giving and spending on their own.

At each location, students decided how to operate their booths, which helped them develop a sense of entrepreneurship and sharpen their decision-making skills, said David Goree, SA Youth’s primary school curriculum specialist. They chose what drink to serve and how to prepare it, and they set a price that they believed was fair for their work and that customers would pay. The SA youth workers tracked the money and the teachers helped put up signs to advertise the booths.

Goree said it is important to let students make these decisions so they can understand the economic skills of price and cost, how to make a profit, and how to save money. He initially thought $ 4 was too expensive for a cup of Hawaiian Punch and Jumex juice, but no customer scoffed at the price.

“This is really the best way to learn to let kids make safe choices, and if it doesn’t work, let them adjust and try again,” he said.

During a customer interaction, Goree took a $ 20 bill from a woman who bought four cups worth $ 16. He turned to Ariana Méndez, 9, and asked how much change he should give back. She quickly replied, “$ 4.”

Not only does Ariana like math, but she also said that she enjoys serving customers on Thursday. She always introduced herself to people when they arrived, and when they left, thanked them for buying a drink and wished them good day.

“You have to be patient,” said Ariana. “Everything revolves around customers.”

Georgia metropolis of Stonecrest is raining cash. Some went down the...

What retains politicians in Washington? Cash and energy