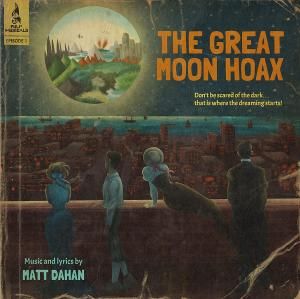 “Don’t be afraid of the dark … that’s where dreaming begins!” From the piano by Matt Dahan (Starry, The Babies, Music Director of Team Starkid) comes with PULP MUSICALS, a new radio-style music series that interweaves stories from science fiction, fantasy and myths into an incomparable audio adventure.

The first episode of Pulp Musicals is titled “The Great Moon Hoax” and is inspired by actual events when, in the summer of 1835, a troubled New York newspaper published a series of articles detailing the discovery of a thriving lunar civilization. 19th century readers believed the fantasies were wild and the moon never felt closer to earth.

The idea of ​​combining science fiction with musical theater came about in mid-2020 when Dahan witnessed his theater community adapt to a world without live venues. Artists and guests went digital, connecting in ways that were both brand new and strangely familiar. He could not shake the image of the early 20th century listeners, who gathered around radios and played radio plays while the imagination filled the scene. As a predilection for the science fiction genre and a longing to find a suitable arena for one’s passions, everything in the form of pulp musicals clicked.

“The Great Moon Hoax” is 94 minutes long and will have an operatic character (less than 5% of the episode spoken) and cinematic in your mind’s eye (songs mix together like scenes on stage, and sound effects play to make sense increase time and place). Future episodes will feature both original and adapted stories, with the protagonists traveling between other classic pulp genres.

The full original cast recording of “Great Moon Hoax” is scheduled to be released on iTunes on Friday, November 19 for $ 14.99 and will come with a full libretto. The album is currently available for pre-order, with the song “More Than This” (sung by Mariah Rose Faith and James Tolbert) is downloaded immediately upon purchase.

To honor the past, “The Great Moon Hoax” will “air” its three half-hour parts for free on YouTube – Part 1 on Monday November 15th, Part 2 on Wednesday November 17th and Part 3 on Friday November 19th . Each part premieres at 8 p.m. East / 5 p.m. Pacific and held live for four hours before being removed. Matt Dahan will be present on live chat when each part airs. For more, follow @pulpmusicals on Instagram, YouTube, Twitter and TikTok.

Join the cast of Pulp Musicals, here at the beginning – the sky is the limit and the stars are waiting.