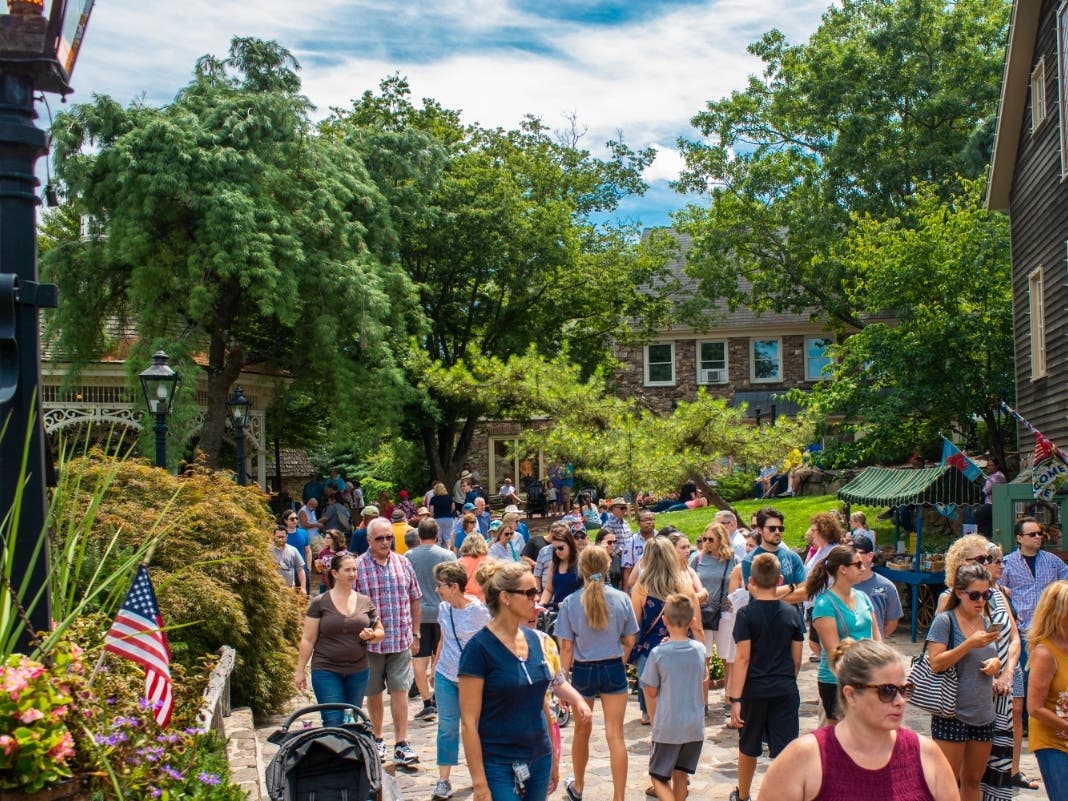 Showtime Under the Stars at Peddler’s Village in Lahaska brings together live entertainment, themed drinks and open-air vibes in Bucks County.

On select Friday evenings, the audience can enjoy “Comedy Under the Stars” with a range of stand-up comedians. On Saturday evenings, viewers travel back to 19th century France for the debut of “Murder at the Moulin”, a crime outdoor theater show.

Look for live music under the huge tent on select weekends.

Peddler’s Village and Without a Cue Productions have also teamed up for crime thriller tours, where guests inspect crime scenes, gather clues, and question suspects as they stroll through the shadows of the quaint picture-book village. This summer, Peddler’s Village is also bringing back its popular outdoor festivals and events – including the month-long Summer Block Party in June and Bluegrass and Blueberries Month in July, followed by the weekend Peach Festival and Sidewalk Sale in August, Oktoberfest in October and the Apple Festival in November.

“We are excited to announce our new series of outdoor events and welcome talented performers, entertainers, comedians and more to the Village,” said Bob McGowan, Chief Operating Officer of Peddler’s Village. “We want to offer our guests entertaining and engaging open-air shows that will keep them entertained. Bringing people together for a night of laughter and fun and offering them a place to spend quality time with their friends or family – that’s it. Peddler’s Village is all about. “

Comedy Under the Stars on Friday June 25th will feature host Dwayne Dunlevy alongside the talents of Erin Harkes, Paul Lyons and headliner David Temple. Future dates are July 16 and 30 and August 13 and 27. Comedy Under the Stars is available now for $ 50 plus tax for a two-seat table. Seating starts at 7:00 p.m., the show starts at 8:00 p.m.

On Saturday June 26th, the Village will debut Murder at the Moulin, presented by theater partner Without A Cue Productions. The weekly open-air crime theater, which runs on Saturdays through August 28, excluding July 3, follows the story of the devious owners of Moulin and features 19th-century Parisian characters including mimes, painters and can-can dancers. The show is a captivating “detective novel” that invites the audience to gather and analyze clues before solving the historically oriented murder puzzle. Tickets are $ 65 plus tax for a two-seat table. Seating begins at 7:00 p.m., the show starts at 7:30 p.m.

Tickets for Showtime Under the Stars and Murder Mystery Walking Tours – now with Murder in the Jazz Age – are available at www.peddlersvillage.com.

Be the first to know what is happening in your city and surroundings. Sign up to receive patch emails and not miss a minute of local and state news: https://patch.com/subscribe