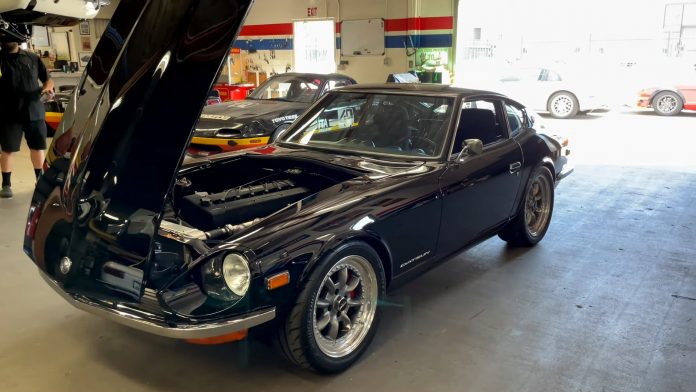 The Nissan 240Z is an automotive legend that combines design for the ages with driving fun and a growling Inline 6. Of course, this engine has a little less power these days compared to modern sports cars. Motor swaps are popular with the platform, but some feel it detracts a little too much from the car’s original feel. However, enthusiasts now have another option – a Honda K20-style DOHC head for the original Nissan L-series engine. built as a collaboration between Datsunworks and Z Car Garage.

As seen on Youtube, the engine gives a wonderful howl and flies with a tearing, tearing noise through the speed range that means business. The example shown was factory-fitted with individual throttle valves, electronic fuel injection and paired with a six-speed change for optimal power distribution. How much electricity, you ask? Early in the tuning, the combination of the Datsunworks KN20 head with a Rebello 3.2L L-Series block produced 350 horsepower and 248 lb-ft of torque at the 91 octane wheels.

The engine runs impressively quiet and is tuned for roadworthiness at full power. The exhaust note is convincing. The naturally aspirated roar with double overhead cams is reminiscent of other ultra-modern performance engines of the 80s and 90s. Close your eyes and you can practically hear the engine breathing and swallowing buckets of oxygen as it speeds down the street.

The history of the KN20 head goes back to 2014, when Datsunworks founder Derek Minetti developed the concept over the years and posted it on the HybridZ forums along the way. The design came about after a discussion of what it would take to produce a double overhead cam head for the L-series engine. After looking at Nissan’s own RB and KA engines, the Honda K20 eventually served as the model for the design. No wonder considering the power of the K-Series engine. We even saw one end up in a Prius.

Since it comes stock with features like roller rockers and detachable cam towers, plus great aftermarket parts availability, it made perfect sense to match the K20 head design with the L-series block. After measuring a K20 and found the basic concept to be compatible, Derek set out to develop the KN20 head from scratch. Seven years later we can enjoy the music of this sonorous exhaust. So far 10 heads have been made, 3 of them in running cars. On the track, Z Car Garage is hoping to offer the head as a bolt-in setup for L-series engines.

A powerful naturally aspirated in-line six is ​​a great way to preserve the character of the original Z-cars. A head swap is also much more accessible than a complete engine swap. While the custom castings and construction certainly don’t come cheap, Neither do vintage Nissan sports cars. We just hope that one day we’ll see and hear one in person.

Do you have a tip? Let the author know: lewin@thedrive.com

WhatsApp is a step nearer to bringing Snapchat-style disappearing images and...