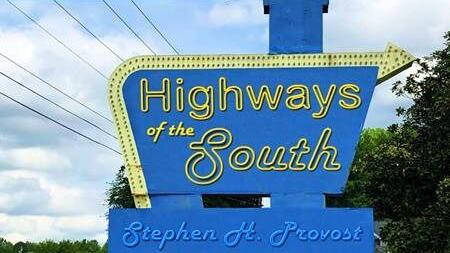 MARTINSVILLE, Virginia – Local writer and photographer Stephen H. Provost makes his way to Highways of the South, the third installment in his American Historic Highways series, available now on Amazon.

The author of “Martinsville Memories” portrays highways as a microcosm of American life, particularly in the south, showing its traditions in roadside attractions, restaurants, and more. On a tour of the region, Provost reveals the complicated history of the south that is reflected in its streets.

The south gave the United States fried chicken and barbecue, NASCAR, and Mayberry. Traveling the highways of the south shows guests from the 1930s, motels from the 1940s, drive-ins from the 1950s, and the billboards of today.

Illustrated with 400 historical and contemporary images of dinosaurs and giant chickens, waffle houses and silencers, “Highways of the South” takes readers on a journey along the highways to discover it all. The companion volumes “Yesterday’s Highways” and “America’s First Highways” are also available.

Stephen H. Provost moved full time to Martinsville, Virginia in 2018 after 30 years of newspaper experience. He is the author of more than 30 books.