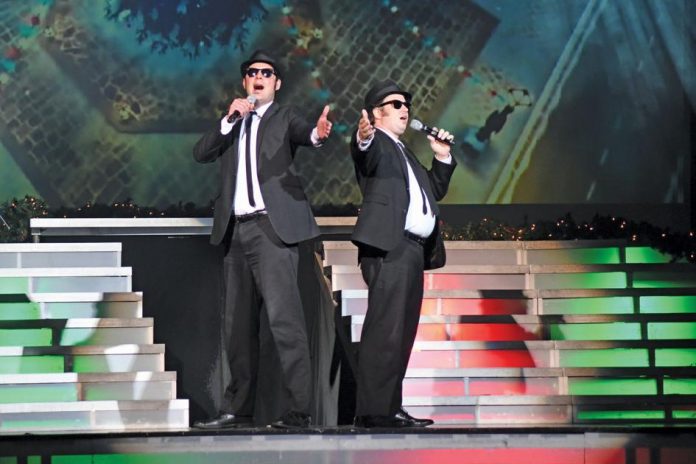 Since the end of May, Legends in Concert audiences have had the opportunity to see tribute performances for Freddie Mercury, Lady Gaga, Elvis Presley and The Blues Brothers.

According to a press release from Legends, the producers are constantly asking for feedback from the audience and doing their best to listen.

“We’re always getting inquiries for Freddie Mercury, and now we’re excited to announce that Fernando Castro will be performing as Freddie Mercury, lead singer for the rock band Queen, this summer,” said a Legends press release.

Castro was the first Freddie Mercury / Queen tribute artist to make headlines on the Las Vegas Strip at the Luxor and Palms Resort and in South Beach in the Copa Room.

Castro was born in Miami, Florida and was introduced to Queen by his mother at the age of 11.

He studied music, singing and theory privately at the University of Miami and in classes at the MDC and Florida International University, so legendsinconcert.com.

Audiences can now see Castro as Freddie Mercury in Branson through September 9th.

Katie Steele returns to the Branson stage with her homage to Lady Gaga.

While in Branson, Steele will perform songs from Lady Gaga’s dance-pop roots as well as her beautiful ballads, the publication said.

Steele is from Minnesota and has been a longtime member of the Legends in Concert family.

For almost nine years, Steele has been performing as a singer / dancer in the many Legends bars across the country and is now a headliner with her homage to Lady Gaga.

Steele began her voice and dance training at the age of 4. She took classical piano lessons at 7 and performed in musical theater productions at 8, according to the Legends website.

Steele will appear as Lady Gaga in Branson through July 31st.

Returning by popular demand, Michael Knight returns to the Legends in Concert stage for the second time this season with his homage to Michael Jackson.

During this limited-engagement summer run, viewers can watch Knight’s performance as King of Pop through July 31st.

As part of his longstanding education, Knight has trained with Jackson’s own longtime vocal coach Seth Riggs and his backup dancer and choreographer Travis Payne.

With his education and training, “Knight has become the premier Michael Jackson tribute artist,” according to the Legends website.

Elvis Presley is played by Ryan Pelton, who both opens and closes the summer show. Pelton won the 2001 Worldwide Images of the King Contest in Memphis, Tennessee.

Pelton has performed all over the world from casinos to trade shows, theaters to festivals, production shows to professional sports arenas, according to the Legends website.

The Blues Brothers are played by Clint Nievar and Justin Sassenella. Playing Joliet Jake Blues, Nievar is a 17-year veteran of the entertainment industry with formal training in singing, acting, and dance. In 2001, Nievar moved to the Branson area and performed on several local shows, including The Welk Show and Stuck on the 70s. He worked for 12 years at Silver Dollar City on various productions and was even a side-kick comedian for Yakov Smirnoff for two years, according to the Legends website.

Sassenella plays Elwood Blues and is no stranger to the Branson stage. He has appeared on numerous local shows including The 12 Irish Tenors, Shake Rattle and Roll, the Magnificent 7 Variety Show, Broadway, the Star Spangled Celebration and many more. According to the Legends website, Sassenella has also worked as a singer for Carnival Cruise Lines and Oceana Cruise Lines.

When Steele leaves the Branson stage in late July, Legends in Concert will welcome a new tribute performer to the show to end the summer season.

“American rock singer and songwriter and four-time Grammy winner Pat Benatar will join the cast from August 1 to September 8,” the press release said. “Jill Marie Burke will pay tribute to this rocker and perform many of her hits including ‘Shadows of the Night’, ‘Hit Me With Your Best Shot’ and ‘Heart Breaker’.”

Burke is an actor, singer, session singer, producer, voice teacher, musical director and marathon runner. She has been singing since she was 3 years old. Her first professional work began on the stage for the Walt Disney Company, portraying characters like Princess Jasmine, Ariel and Pocahontas, according to the Legends website.