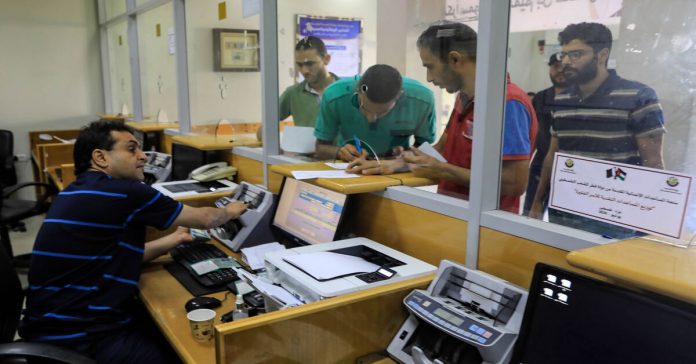 Palestinian press reported yesterday that the UN approved a new mechanism to send Qatari aid funds to needy families in Gaza. In the past few years, Qatari envoys came to Israel every six months and drove from there to the Strip with suitcases full of cash. Once the money was in place, it was given to a representative of the families in need to be distributed at the post offices. According to reports, the new mechanism would result in the aid money being transferred to the strips through Palestinian banks in the West Bank under the supervision of the UN. This new mechanism would guarantee better control of money. It will only refer to charity funds, not the salaries of Gaza Strip officials. This solution was apparently promoted by the UN special envoy for the Tor Wensland region. The report also alleged that neither Israel nor Hamas objected to it.

The Lebanese newspaper Al-Akhbar published this morning that Hamas had agreed to one in talks with international and Qatari officials mechanism through which Qatari money would be distributed through Palestinian banks and under the supervision of the UN. Official Israeli sources unnamed yesterday said Israel’s army radio that the reports of such a new mechanism were not accurate. However, if such a mechanism is actually put in place, it should not only help combat the dire economic crisis in the Strip, but also lay the foundation for promoting an agreement between Israel and Hamas.

In recent years, the new Prime Minister Naftali Bennett and the new Finance Minister Avigdor Liberman have repeatedly voiced criticism of the suitcase-cash procedure and accused the then Prime Minister Benjamin Netanyahu of financing the Hamas terrorism. That was actually the background too Liberman resigns 2018 from his position as Minister of Defense in the Netanyahu government. Israel’s new government has insisted that a new mechanism be put in place to transfer donations to Gaza through a UN fund. Such a fund would directly finance development projects in the strip, bypassing Hamas’ involvement, and preventing the money from being used to dig attack tunnels or manufacture weapons.

Although ready to negotiate, developments on the border over the past two weeks reflect the military strategy of the new Israeli government against any terrorist attacks from the Gaza Strip. The Israeli Air Force attacked July 3 Targets in Gaza and retaliatory strikes over fire balloons that were shot down from the Strip during the weekend. Targets included a Hamas rocket launcher and an arms factory. As early as July 1, IDF jets struck another Hamas arms factory in Gaza in response to the fire balloons launched on the same day.

Minister for Diaspora Affairs Nachman Shai said yesterday (July 4th): reacts more violently [than the Netanyahu government]. This is not a fixed formula for an air strike for everyone [incendiary] Balloon for an air force attack … Basically it is clear that Israel is not prepared to accept any violation of sovereignty – not even by one [arson] Balloon.”

surgery Guardian of the walls ended May 21 after Hamas and Islamic Jihad fired nearly 4,400 rockets at Israel over a twelve-day period. During these days of fighting, the IDF struck back and transported more than 1,500 targets from the two groups. A truce brokered by Egypt ended the fighting and offered a short-term solution. Since then, Egypt has been pushing for a long-term deal. Israeli commentator Tal Schneider reported On July 1, Cairo appointed the experienced mediator Ahmad Abd al-Khalek to its negotiating team, which Jerusalem sees as an intensified mediation effort and before an expected visit by Bennett to Washington. Although no date has been set for such a trip, President Joe Biden told visiting President Reuven Rivlin last week that he expected to meet the Israeli Prime Minister as soon as possible.

While the situation on the border with Gaza had deteriorated in recent days and more and more hot balloons ignited bushfires in the southern communities of Israel, Egypt appears to be continuing its mediation efforts to reach an agreement between the sides. A senior Israeli security delegation visited Cairo last week for mediated talks and is expected to return this week. The delegation included National Security Council official Nimrod Gez, Israel’s chief negotiator for the release of Israelis detained by Hamas Yaron Blum, and several other senior security officials.

As Prime Minister, Bennett had made it clear that a long-term deal with Hamas would have to include the return of the bodies of IDF soldiers Oron Shaul and Hadar Goldin to Israel and the release of the two Israeli civilians, Avraham Avera Mengistu and Hisham from Hamas. al-Sayed are being held. IDF seniors have said in recent days that any agreement to relax the restriction on the closure of Gaza must include progress on this issue. A Palestinian report last week said Israel could consent to the release of some sick Hamas prisoners in exchange for information on the physical and mental health of Israeli prisoners. Mediated talks are reportedly blocked in Israel as Hamas insists that prisoners responsible for the killing of Israelis also be included in the prisoner exchange.

Will Fuller of Miami Dolphins out to assist athletes shield their...

Lady decorates houses for Indy 500 to boost cash for Gleaners...

Did TY Hilton flip down extra money from Ravens?