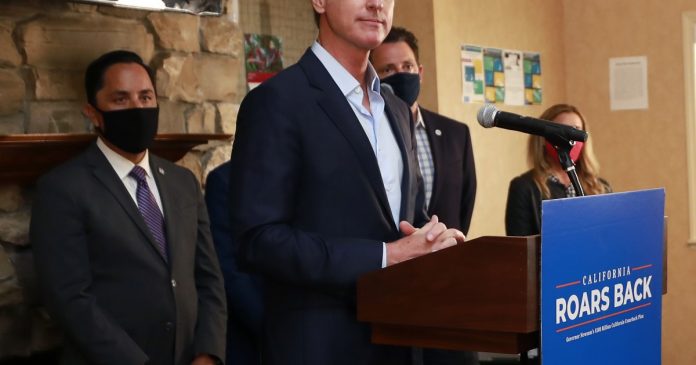 Governor Gavin Newsom said this week that he intends to use part of the project State budget surplus of $ 75.7 billion to send stimulus checks to Californians.

The $ 600 checks are for those earning less than $ 75,000 a year. It would cost about $ 8.1 billion. Newsom has said direct checks to Californians will be one way are recovering from the pandemic. He also suggested a $ 5 billion rental subsidy.

Under a spending cap approved by state voters in 1979, Newsom is required to return taxpayers money when there is a budget surplus. However, the governor’s plan goes beyond what is necessary, restricts controls to working-class and middle-class residents, and the money would be returned before it is needed.

Q: Is Governor Newsom doing the right thing with the excess cash?

JA: It’s difficult to criticize the governor’s plan for him to roar back after the pandemic. In addition to the economic relief of low-income and middle-class families, the immediate needs of environmental, infrastructure and social programs are also taken into account. The governor’s proposal, while a good one, does not use the surplus as a catalyst to address longer-term state problems. The real estate crisis and the associated problems with the cost of living, which are holding back the growth of the middle class, threaten problems. The resources must be geared towards sustainable solutions.

NO: California’s economy is already ready to recover strongly without additional stimulus. Allowing the state’s vital entertainment, leisure, and hospitality industries to open up fully should spark a surge in pent-up demand. The recent distribution of $ 1,400 checks by the federal government has helped total income increase nearly 30 percent from its pre-pandemic peak. Much of this money is still in bank accounts. The state should take the opportunity to strengthen its rainy day fund and meet its long-term pension obligations.

NO: Not really a discount, but just another giveaway for spending. After California imposes some of the strictest COVID-related restrictions and recent reopenings in the country, distributing $ 600 to households won’t do much. The state does not work with budget surpluses when the massive long-term liabilities tighten. As long as California has minimum debt payments and dubious projections of future returns on revenue, annual expenses will not cover projected pension obligations for unfunded government employees and deferred maintenance of highway infrastructure.

NO: While popular with voters (and threatened with a recall election), the money should better be spent on other issues California is facing. The governor must obey the law and return excess funds in accordance with the law. However, when combined with the excessive federal grants on offer, this is more cash than other monies. I would support childcare, any type of vocational training or internship program, or even infrastructure funding. The economy is accelerating rapidly and will grow even faster if people returned to work instead of being encouraged to stay home with more grants.

NO: A budget surplus partly indicates over-taxation. But we need to protect ourselves from stunts that appear to be triggered by this goofy recall movement and strive to find more thoughtful ways to get and spend money. Why not call it the “Robinhood Tax Giveaway”? I would like some clarity on a long-term fiscal equalization plan that cuts taxes while ensuring that the focus remains on education reform, infrastructure spending, water improvements and fire safety.

Do not attend this week.

NO: Governor Newsom still has to return the money according to our constitution. He claims he will send $ 600 to anyone with incomes up to $ 75,000 per year and an additional $ 500 to taxpayers with dependents. He’s essentially sending the money to voters who are helping him save his job. It should only go to those who have been financially affected by Covid-19, not those who are middle class, without any change in their financial position.

YES: Direct payments to those most likely to need the money (and to spend it immediately) are widely seen as a great way to boost the economy. The next logical step would be to make these payments automatically based on economic indicators. As for the rest of the surplus, I would like California to invest more in our future: early education, post-school programs, professional training, and weather protection.

NO: There are times when the economy needs more fiscal stimulus, but this is not one of them. Federal spending and deficits have been massive, and monetary policy is keeping the accelerator down. I think inflation and supply shortages will turn out to be the big economic story for 2021. I want to encourage the governor to focus on stopping the exodus of high-paying jobs from California.

Do not attend this week.

NO: While I’m not a supporter of the recall, I think the “recall discount” is part of the story. Any stimulus checks that may be sent to 75 percent of adult residents are not targeted enough to help people with real needs. Either we should better target the funds or use them for longer-term projects with lasting economic effects, infrastructure and improvements in the education system and reserve them for the next downturn.

NO: California is legally required to return part of its estimated $ 76 billion surplus to taxpayers. Recently, this amount has been questioned as it contains reserves and constitutionally required expenses. According to the Legislative Analyst’s Office (LAO), the surplus is expected to be around $ 38 billion. The governor’s spin of the surplus and the timing of the stimulus payments to Californians appear to be politically motivated.

YES: How to spend tax revenue is best left to California residents. The proposed distribution of stimulus tests contributes to this. In addition, the state is obliged to reimburse part of the tax surplus payments to the taxpayers. Tenants who have lost their jobs due to the pandemic have benefited from eviction moratoriums. However, many will not be able to repay the rental obligations accumulated during the pandemic without assistance.

NO: The most effective way to recover from the pandemic is to lift all restrictions on businesses. Giving billions of dollars to millions of people regardless of their real needs is not the best use of government funds. The money should be used to support those who are directly affected. A shotgun approach does not result in a quick recovery but in excessive spending, which leads to inflation when discretionary spending increases.

Do you have an idea for an EconoMeter question? Email me at phillip.molnar@sduniontribune.com.

A Backyard’s Classes for Rising Your Cash

2 Accused of Cash Laundering, ID Theft Scheme That Focused at...