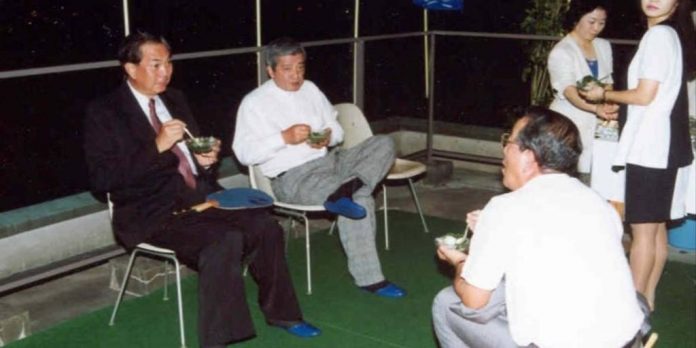 Boonsithi Chokwatana is chairman of the Saha Group, Thailand’s leading consumer goods company. This is part 22 of a 30-part series.

After my father’s funeral and memorial service, we had to discuss how to lead the group.

An old friend of my father’s, Prasit Kanchanawa, a former House Speaker, attended the family meeting and took on the role of traffic manager (my father must have asked him to take care of the group in case anything happened to him).

It was decided that the head of Saha Pathanapibul, the core of the group that formed joint ventures with Lion and other joint ventures, would move from Boonchai, the fifth son, to Boon-Ek, the eldest son. The head of the holding, Saha Pathana Inter-Holding (SPI), was switched from me, the third son, to Boonpakorn, the second son.

It was decided that I would follow in my father’s footsteps as the leader of the entire group. I was 54.

Before his death, my father did not explicitly name his successor. Nevertheless, he had told his fellow human beings that he “wanted to hand things over to Boonsithi one by one”.

In contrast to me, all of my siblings completed their university education abroad. As the only old-style middle school graduate, I had worked with my father for almost 40 years. I was proud to say that I knew the group inside out.

There was no resistance at the family meeting, but we had to be considerate of older family members. Prasit thought it best to leave two of the three core businesses, including ICC International, to my older brothers. There was no conflict within the family or group, and from the outside it must have looked like friendly succession.

I am often asked about this, but there is no company called the Saha Group and there is no legal basis for my position as “Chairman”. As the founder of the company, my father was involved in all aspects of management and never held the title of CEO or President.

Of course, I felt a certain amount of pressure. I could no longer ask my father for consent or advice.

In 1991 the group already comprised almost 190 companies, and I had to secure the livelihood of 10,000 employees. People inside and outside the company watched Saha change. If we made wrong decisions, not only would we lose people’s trust, but our company could fall apart.

I thought to myself, “I’m not going to change the way my father did things.”

I didn’t want the power of a chairman, and I didn’t want to change the decentralized style of leadership that relies on growth through division. Personally, I don’t like being told how to hold my chopsticks, and I had no intention of telling others how to do it.

So the main idea was to just keep working like we’ve always done.

The mechanisms were already in place. My father, the founder of the company, and I, the president of SPI, received monthly reports from the group companies. Then, as a group leader, I would look through the reports, get a feel for the profits and losses and the problems of the individual companies, and provide support when I thought it was necessary. I also continued the Thursday lunches my father had hosted for family and officers as a forum for informal discussion.

One of the reasons I didn’t see the need to change anything was that Thailand was booming in the early 1990s. The economy grew by almost 10% a year. With the appreciation of the yen after the Plaza Agreement of 1985, Japanese manufacturers accelerated their overseas expansion. Many of them came to Thailand. Saha just had to keep growing his business.

Later referred to as “Detroit of Asia”, Thailand became a center of the auto industry, especially for Japanese manufacturers. This was around the time we got into the auto parts industry.

We set up a joint venture with Seiren, a Japanese textile manufacturer, who contacted us about manufacturing seat fabrics in Thailand. We started with Molten, who we had already worked with to make footballs and basketballs, to make new rubber parts.

Everything seemed to be going smoothly. However, both the Thai economy and Saha faced unprecedented challenges in the late 1990s.

This column is part of The Nikkeis “My Personal History” (“Watashi no Rirekisho”) series of autobiographies. The series first appeared in The Nikkei in 1956. Since then, a multitude of people changing the world have written or dictated their life stories for publication.

Diablo four returns to the darkish type of Diablo 2

Denver Nuggets’ aggressive type results in a dominating win over the...