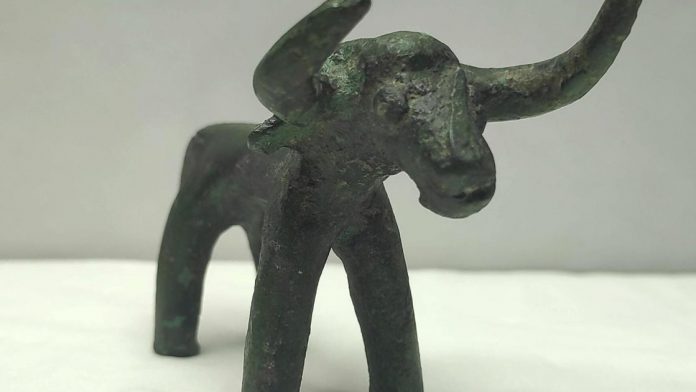 ATHENS, Greece (AP) – Heavy rains in southern Greece have led to the discovery of a bronze bull figure believed to have offered a votive to the god Zeus in ancient Olympia as early as 3,000 years ago.

The Greek Ministry of Culture said Friday that the small, intact figure was found after an archaeologist discovered a horn sticking out of the ground following recent rains in the area.

The excellently preserved figure was taken to a laboratory and the first examination revealed that it dates from the geometric period of ancient Greek art, around 1050 BC. Until 700 BC It is believed that it is a votive that was offered to Zeus as part of a sacrifice. According to the Ministry of Culture, the sediment cleaned from the statuette showed clear traces of burns.

It is believed that thousands of votive offerings were made at the altar of Zeus. Many were found in a thick layer of ash and exhibited in the archaeological museum in Olympia.