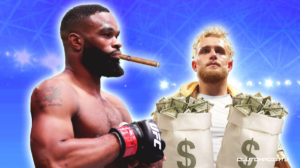 It’s almost there. Sunday is the big day as Floyd Mayweather and Logan Paul Finally get in the ring and fight it out in Miami. After a dramatic press conference there was a lot of anticipation for this fight, but let’s face it, they’re doing it for the pocket.

While both fighters are about to make a fortune, Floyd Mayweather expects to make between $ 50 million and $ 100 million for this fight. for TMZ. Ridiculous, isn’t it? The 44-year-old also believes he can rack up a similar number the next time he battles Jake Paul.

Money Mayweather really wants to try his hand at Logan’s brother afterward, but for this fight he believes it will be a walk in the park.

“It’s a win-win situation for me, but I’m in a no-win phase because if I get it in the 1. If I run it a few laps and drag it out, they’ll say ‘ Oh man, he ditched a YouTuber for a few rounds’. But it is what it is. We’ll have some fun on Sunday. “

Floyd Mayweather was also pretty clear about his stance for a Jake Paul fight.

“After Logan, probably Jake. We do not know it. We will see.”

Let’s face it, it would be fun to see Floyd fight Jake when he stole Mayweather’s hat after this whole fiasco last month. Bad blood is definitely brewing there.

Sunday should be good.