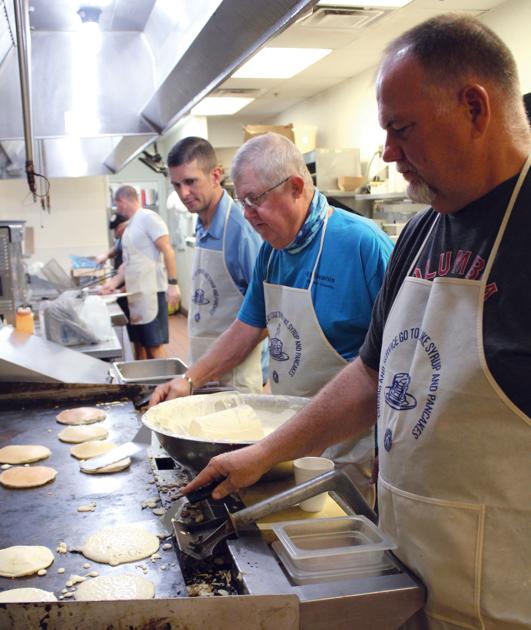 Club President Darrell Olson said they bake about a thousand pancakes in a typical year.

“We hand mix the batter and methodically pour it in to create the ultimate pancake,” he said, mentioning that Shoney donated the pancake batter.

The guys who bake the pancakes said they had already made about 600 pancakes by 9am.

Eric McMichael turned pancakes at breakfast every year. He said the secret to making the perfect pancake is getting the grill to the right temperature.

Others in the kitchen repeated this advice.

While breakfast has unlimited pancakes, Olson said they haven’t tested that idea with a giant pile yet.

He said the club held the event every four years at the Buffalo Wings and Rings near Ring Road.

“It’s a full kitchen and a very nice dining room,” he said. “You are a big supporter of this very rewarding fundraiser.”

The funds raised will be used to support service projects throughout the year, he said.

Fundraising is why Melissa Gaddie, a club member who served tables there, helped with breakfast.

“We’re just trying to raise money to support the children in our community,” she said. “I want to give something back and I think it’s something we have to do.”

She also said it was a lot of fun.

Olson said people can learn more about the club by following his page on Facebook.

“If you have a serving heart, we would love you to join our club,” he said.

Becca Owsley can be reached at 270-505-1416 bowsley@thenewsenterprise.com.