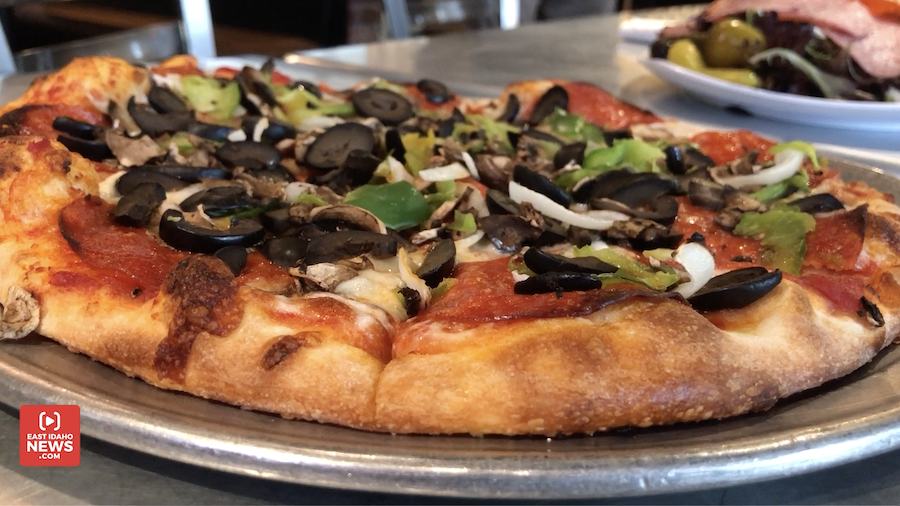 Lucy’s pizza clerk tosses crust into the kitchen by hand. See how we try some of the menu items in the video player above. | Rett Nelson, EastIdahoNews.com

With three locations in eastern Idaho, one in Twin Falls and one in Orem, Utah, the menu offers nine pizza specialties and calzones, as well as a variety of salads, subs, wings and starters.

We stopped in downtown Idaho Falls to try four of the restaurant’s most popular products. Check it out in the video player above.

Geoff Padigimus and his partners Brian Padigimus and Tim Wright have owned the company since it opened in 2009. Geoff explains that getting involved in opening the restaurant was a breeze for him.

“I’ve done a lot of different deals with the other two,” he says. “The three of us together are more doers than speakers, and it makes sense to stay on the same train with like-minded people.”

The inspiration for opening a pizzeria came from the trio’s experience of eating hot stuff pizza while they were working on construction. They planned to open their own location until a Connecticut acquaintance introduced them to New York-style pizza.

“He hooked us up with his brother Frank Franco, who had Franco’s pizza on 1st Street for six to nine months. We ended up buying this kitchen and all of the equipment there (which is still in use at the Roberts site), ”says Geoff.

Each pizza is hand tossed and cooked exactly the way pizzas are made in New York.

“We went to (New York) a few times for research and development,” says Geoff. “You throw it by hand. It looks very similar. Our ovens are actually a lot of the same ovens used in New York. “

In addition to the typical style, according to Geoff, the time and effort that employees spend preparing food on a daily basis is another special feature that sets them apart from other companies. All the meat and batter are made fresh every day and they chop up the cheese and make the sauce themselves.

All the vegetables are cut in-house and nothing on the menu is frozen, he says.

Geoff and his team added a new menu item in January. It’s a pizza flavor called The Blaise and features bacon, chicken, mushrooms, and cheese, plus a pungent honey and garlic sauce mixed with ranch. Geoff says it’s very popular at the Twin Falls location.

He plans to open another store in Utah and Boise in the near future. If you’re looking for a job, Geoff says they’re currently hiring. Interested parties can apply in person or in person through the website.

The Idaho Falls locations are open Monday through Friday from 11 a.m. to 9 p.m. and closed at 10 p.m. on weekends. The Roberts site has its own schedule.