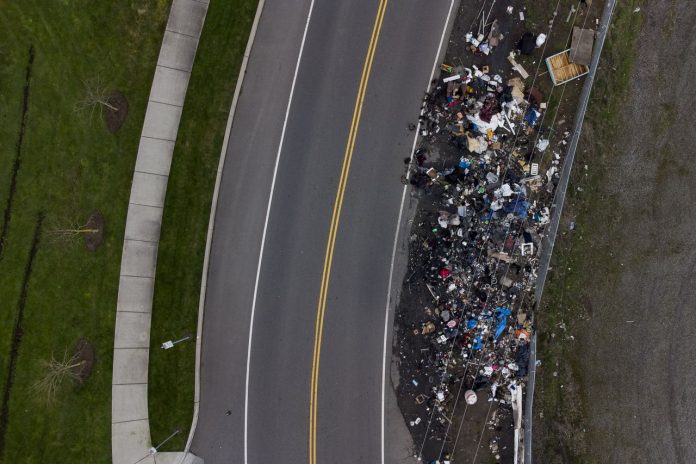 A new anonymously funded political group launched a campaign on Friday to encourage elected leaders in the Portland area to move faster and better coordinate to address challenges viewed by unnamed donors as the greatest challenges in the city.

Many of the things they want to do, from creating safe homes for people on the streets to reducing gun violence, are in great demand with voters and officials from across the political spectrum. But they do not have easy solutions and there is no broad consensus on which steps to take in the right direction.

The dark money charity People for Portland began broadcasting television spots Friday urging officials at all levels of government to “end the humanitarian crisis on our streets, reform the police force, restore public safety and cleanse our once beautiful city “.

“Portland is still full of potential, but the politicians are doing too little, too slowly, to save our broken city,” says a woman in the TV ad as black and white pictures of tent camps, graffiti and headlines about murders pass by.

“Let’s tell the politicians to do their job to save the city we love,” concludes the ad, suggesting that people go to the group’s website and sign up for unspecified future political activity.

With the group’s funders remaining largely anonymous, the two longtime political advisors who lead the campaign have a more public role in the appeal. Dan Lavey, who has worked for independents and Republicans like Chris Dudley, and Kevin Looper, who has worked for progressive causes and Democratic candidates like Governor Kate Brown, are partners in this effort.

Under state and federal campaign funding rules, it is legal for the group’s donors to remain anonymous under their establishment as a political nonprofit.

Looper said in an interview on Friday that the central problem Portland is facing is “the lack of courage among elected officials … which makes them more afraid to do wrong than to do something”.

The campaign targets every elected official with ties to the Portland area, including city officials, district officials, metro regional government councilors, the sheriff and district attorney, state lawmakers, and the Portland-home governor who is also from Portland. Through digital and television advertising, the total cost of which they rejected, Lavey and Looper plan to urge local voters to contact their elected leaders and urge them to take action on People for Portland’s priorities.

“We need to get the public more involved so … elected officials at all levels feel the heat of the people they represent,” Lavey said.

Local leaders, particularly on the Portland City Council, are already working to resolve most of the problems that People for Portland lament. But the group says they want them to get results faster.

That includes making body-worn cameras mandatory for the Portland Police Department, which the U.S. Department of Justice asked the city to enforce July. Portland Mayor Ted Wheeler directed the police bureau this month to prepare for body-worn cameras, including researching various camera systems and getting bids. OPB reported. Long a vocal opponent of body-worn devices, Commissioner Jo Ann Hardesty said she was learning how to use the technology successfully in other cities, OPB said.

People for Portland urged the city to request the body-worn cameras in a comment sent to The Oregonian / OregonLive and made separately available to the newsroom on Friday.

The city commissioners are already in the process of defining six locations where it will be built Protected Villages with showers, toilets, laundry service, psychiatric care and case managers. The move is tied to the latest from the city council politics in the evacuation of camps, which lowered the bar for the removal of “high impact” camps, in part because of the idea that people could move to the city-sanctioned villages.

The city and other regional and state government agencies also began concerted efforts to accelerate garbage collection and landfill cleaning in the Portland area after service cuts and lack of coordination resulted in solid waste accumulations around the city during the last year. However, the group says governments have more to do and “professional sanitation is an expected basic function of government”.

In addition, People for Portland wants Multnomah County’s District Attorney Mike Schmidt and other prosecutors to “prosecute those involved in violence and vandalism” during demonstrations, according to a form letter posted on the group’s website. Schmidt has obtained guilty pleadings and multi-year prison sentences for several people charged with arson, window smashing and other vandalism in connection with nighttime protests in downtown and other parts of the city.

People for Portland Cities Survey paid for by FM3 Research as proof that many Portlanders agree with its priorities and want local executives to deliver faster results. According to the group, a poll of more than 800 likely voters conducted more than three months ago showed that 84% of respondents agreed that tent camps are a “humanitarian emergency” that requires more urgent action from city and county officials, and 85% supported it Redirecting existing taxpayers’ money to create “50 Safe Sanitary Villages” for the homeless across the city. When it comes to public safety, the group cites survey results that found 62% of respondents said the Portland police force could be reformed, 91% supported police body cameras, and 49% believed the city had too few police officers. 84 percent of respondents agreed that law enforcement agencies “should aggressively pursue the small number of people who use protests to cover for property damage and violence”.

Finally, People for Portland asked if Portland voters would stand against the city and county incumbents in the next election if things didn’t get better. Almost nine out of ten eligible voters surveyed said they did.

A poll of 300 Portland residents conducted by Portland firm DHM Research for The Oregonian / OregonLive over a very similar period April 30 through May 6 found that 42% said the city should hire more police officers . Most of the city dwellers surveyed said the police presence should remain unchanged (30%) or decrease (24%).

Lavey and Looper repeatedly pointed out a short timeframe – Looper suggested two years – in which elected leaders need to make significant improvements to prevent Portland from becoming a “lost city” in which a critical mass of people have decided not to renew commercial leases and stop supporting elements of a vibrant city like art.

Andrew Hoan, CEO and President of the Portland Business Alliance, did not immediately respond to a call Friday afternoon asking whether the group supports the People for Portland campaign.

However, two well-known business owners expressed their support. Businessman and philanthropist Jordan Schnitzer, whose commercial real estate company owns Portland real estate, said he had “been approached about funding,” met with the group, and believed the campaign had “some good goals.”

“I support anything that helps Portland get back on track,” said Schnitzer, who refused to say whether he made a donation to People for Portland.

Tim Boyle, President and CEO of Columbia Sportswear Company, was open about his support for the group in an interview Friday. “I contributed some money to surveys to validate what everyone in town thought was right,” said Boyle. “The city is close to my heart, I grew up here.”

“Every elected official in the state of Oregon, especially the senior official, is all complicit in the problem we have in Portland today,” Boyle said. “Half of them live in Portland, the other half visit Portland, and it’s a shame they don’t actively move forward on all the issues that are clearly visible to everyone.”

Boyle said some Columbia Sportswear Company employees cited problems in the city as the reason they were leaving, and some potential hires turned down jobs they should have worked in the city.

“I’m more than happy to talk about this out loud and put my name on my loudness,” said Boyle. “I’m not a black money person.”

Methods to keep away from operating out of cash in retirement