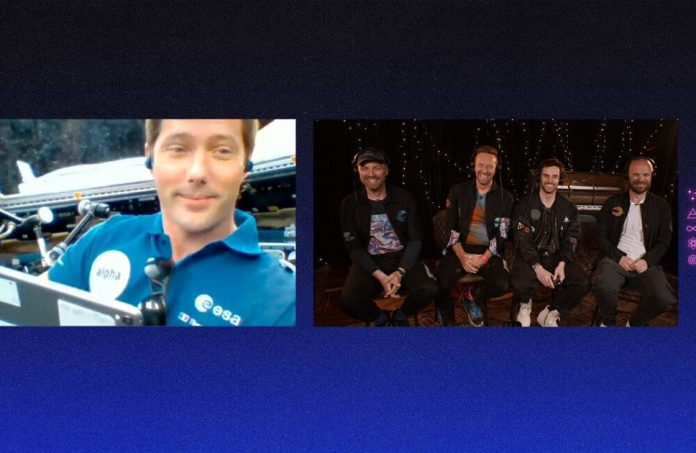 Chris Martin and Co asked the French ESA astronaut Thomas Pesquet for help to bring their new song into the world on Thursday evening (June 5th, 21st) from the International Space Station.

The band members – including Guy Berryman, Jonny Buckland and Will Champion – participated in a live video chat with the spaceman currently aboard the ISS, before performing the track with alien-inspired CGI choreography and visual effects took place reflected back to earth by Pesquet.

Front man Chris told the astronaut, “We sent you music because we can’t play for anyone on Earth right now, so we thought we’d only play for you.”

Coldplay will open the BRIT Awards on May 11th with a spectacular performance of ‘Higher Power’ filmed from a platform on the Thames.

Before the single was released, cryptic billboards around the world pointed to a mysterious website called alienradio.fm.

And fans managed to decipher the letter-like symbols to reveal the song title and release date.

Meanwhile, it was recently reported that Coldplay’s new album is imminent after the ‘ALIENS’ group registered and officially applied for a trademark for the term ‘Music Of The Spheres’, the name for music, merchandise and more in the United States to use.

A source said, “Chris and co have been dropping clues for a while but it’s finally getting started. They were working on new music during lockdown and it will all culminate in the record that has the working title.” ‘Music Of The Spheres’. Chris and the group have now officially registered the name as a trademark for an album. It also contains goods and everything you need for a gate. It’s a really exciting time for everyone. There is no doubt that this project will also go straight to the top. “

‘Music Of The Spheres’ was also printed in a book accompanying the vinyl version of Coldplay’s 2019 album ‘Everyday Life’, along with ‘Coldplay, Coming Soon’ in fine print.

‘Higher Power’ is now available for all major streaming services.

‘Lucifer’ Season 5’s Penultimate Episode Is a Heartbreaking One (RECAP) |...