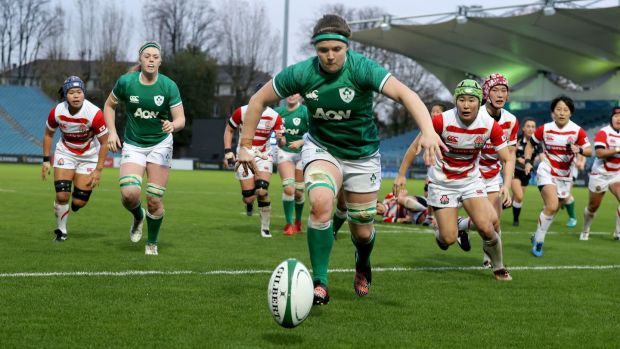 Ciara Griffin spectacularly ended her international career by bagging a series of stellar attempts in a hard-earned win for the Irish women’s rugby team against Japan at RDS.

With a gap of nine points and the dismissal of first-time starter Hannah O’Connor in the 29th minute, the home team did just enough to beat a stubborn Japanese challenge.

It was also Adam Griggs’ last game as Irish head coach, with Greg McWilliams taking the hot seat in the New Year. Whoever the latter chooses as their new captain, they will have big footsteps to fill – this is the impression Griffin has made since taking office in 2018.

It was Ireland’s semi-final Enya Breen who got the ball rolling as she converted a routine six-minute penalty.

However, Lesley McKenzie’s guests finally grew into the action and rushed to attempt the opening of the proceedings in the 17th minute. After breaking a defensive gap with a Kanako Kobayashi offload, Ria Anoku had the vision of getting Mana Furuta off-center for an unconverted fiver to the left of the post.

The admission of this attempt was a setback for Ireland, but they suffered an even bigger blow when O’Connor received a red card from Italian referee Clara Munarini for a high challenge against the chin of Japanese whore Nijiho Nagata.

This raised serious questions about the Irish determination and at the end of a long period of attack, blindside flanker Seina Saito turned the game into a turn in the 37th minute that gave Japan a 12-3 interval advantage.

The home team needed a spark to work their way back into the standings, and thanks to their soon-to-be-eliminated skipper, they got just that four minutes after the restart. After downloading an attempted clearance from Kobayashi, Griffin sprinted towards the loose ball and landed perfectly.

Ciara Griffin rushes to score one of her two attempts against Japan. Photo: Dan Sheridan / Inpho

Though Breen was marginally off with their tricky bonus hit, Ireland was now a rejuvenated force and tried to take their numerical shortage lightly. In her 24th game as Ireland’s leaders, Griffin showed why she will leave such a huge void by leaving the line-up.

After consultation between referee Munarini and TMO Matteo Liperini, she received a second try in the 55th minute for a great driving finish under a number of Japanese bodies. Breen was there to provide the extras when Ireland suddenly had a three point lead (15-12) again.

Aoife Doyle believed she had extended her lead in the right corner to just over an hour but was disqualified on that occasion for a blow from Irish defender Lauren Delany.

A missed penalty by Breen on 70 minutes left the door open for Japan, but Ireland held out under relentless pressure in the final moments to get Griffin and Griggs the perfect dismissal.