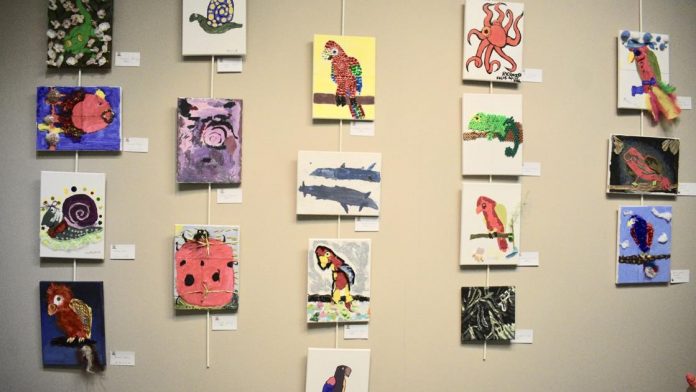 PRINCE FREDERICK – When Charles Caplins decided which animal to paint for the “Into the Wild” art project, he thought, “Why not birds?”

So Caplins chose a parrot and the colorful, feathered flyer is now hanging on a wall in the CalvART Gallery in Prince Frederick.

The exhibition features 80 works by more than 40 artists from The Arc Southern Maryland, Southern Maryland Community Resources, Bay Community Support Services, and the Center for Life Enrichment, all local nonprofits that support people with special needs with their missions.

“I tell you, it moved me to tears,” said artist Linda Craven, who helped develop the curriculum with Jim Hurley, Therese Thiedeman and Pamela Callen. “When I took [the art] I was blown away by how much attention to detail there was and how everyone put so much care into each piece to get it the way they wanted it. Everything is just so colorful and blingy. It just blew me away. “

The curriculum included creating large pieces of art from small photos, creating a clay model of their art, and creating a small piece of art that was later put together into a mysterious piece of art.

As of March, the artists were divided into five groups and each group had a weekly Zoom session in which they made their pieces.

The exhibition of their pieces in the Prince Frederick Gallery came as a surprise to the artists.

“It’s pretty cool,” said Caplins, who lives in Huntingtown. “The best thing is to see the friends you couldn’t see [during virtual classes]. ”

“I like it hanging,” said Rebecca Priya-Elwell of Hollywood, who created a glitter-encrusted parrot along with a diorama of snail, parrot, octopus and chameleon.

Venturing away from birds for his second part of the project, Caplins built a snail out of clay as a nod to SpongeBob SquarePants’ pet Gary.

Mary Herbert said the best part of the project was getting it done. It wasn’t difficult for me, it was pretty easy. “

The California resident stayed with snails throughout the project “because I like them.”

When asked about the works of her fellow artists in the exhibition, Herbert said that she thought “everyone is pretty”.

But not everything went smoothly. Michelle Haley’s colorful clay octopus suffered a broken tentacle while painting. It currently rests on Haley’s dresser at home but is expected to recover soon and get back on the exhibit.

“One of the legs fell off when a staff member painted it with me,” said Haley, who lives in California. “But I glued it back together.”

Southern Maryland Community Resources’ Arts4All project was born thanks to a grant from the Calvert County government. Arts4All is an SMCR program that provides opportunities for people of all abilities in Southern Maryland to actively participate in the literary, visual, and performing arts.

“It’s just exciting to see what they have created and it really lets their personalities shine through,” said Theideman, who is the SMCR program director. “I definitely think they should see it in person and see what each artist has to offer.”

With virus charges low, Californians wanting to return to occasions |...