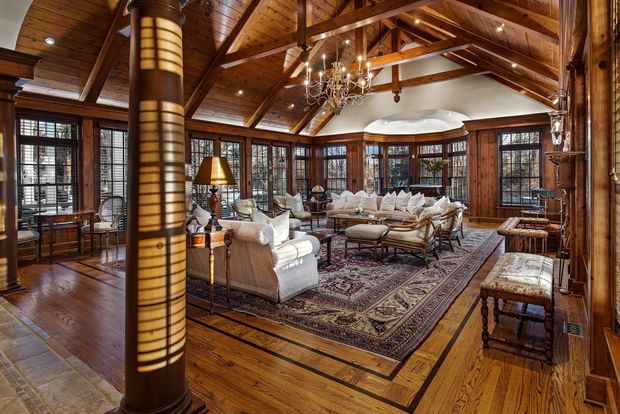 This Connecticut villa has hit the market.

A nearly one-hundred-year-old Georgian colonial mansion on eight acres in Connecticut was listed for $ 6.7 million this week.

The home has nine bedrooms and 13 bathrooms and is nearly 18,000 square feet. There is a basketball court, a pool and an English garden on the premises. The property is located in the city of New Canaan, about an hour’s drive from New York City, according to listing agents Cliff Smith and Todd David Miller of The Agency, a Los Angeles-based broker expanding its presence to the northeast.

More: The historic 1920s property on Miami’s Star Island is selling for $ 39 million

The house, built in 1930, has since been expanded and updated. For example, the chef’s kitchen and master bathroom suite were recently completely renovated, said Mr Smith.

“This is for the New York buyer who wants a classic home with all the modern conveniences,” stated Miller.

The main reception areas contain authentic details. These include a large room with oversized windows and exposed beams, a wood-paneled bar and lounge with an arched door, a formal dining room, and a game room.

A family room is off the kitchen and there is a spacious terrace for al fresco dining. There’s also a solarium with a fireplace, nicknamed the “canopy room,” because it’s like sitting in the trees, Mr. Smith explained.

The master bedroom suite has two walk-in closets and dressing rooms, as well as a recently renovated bathroom.

Additional features include an office with built-in bookshelves, a gym, a terrace, well-tended grounds and lawns, and a poolside cabana. A separate two bedroom cottage is also on the property.

The mansion offers complete privacy and “the grounds are great,” he said.

Long before the restrictions caused by the Covid 19 pandemic, parties with up to 400 guests were held on the property. As a result, support structures were installed under part of the property to allow parking of an additional 150 cars, Mr. Smith noted.

The house was last traded for $ 2.5 million in 1996. The seller did not immediately return requests for comments.